Notice: Function register_block_script_handle was called incorrectly. The asset file for the "editorScript" defined in "contact-form-7/contact-form-selector" block definition is missing. Please see Debugging in WordPress for more information. (This message was added in version 5.5.0.) in /home/morphman/public_html/wp-includes/functions.php on line 5835
 Zappar – The gateway to Augmented Reality | The Torch Entertainment Guide
Skip to content
Technology Virtual Wednesday 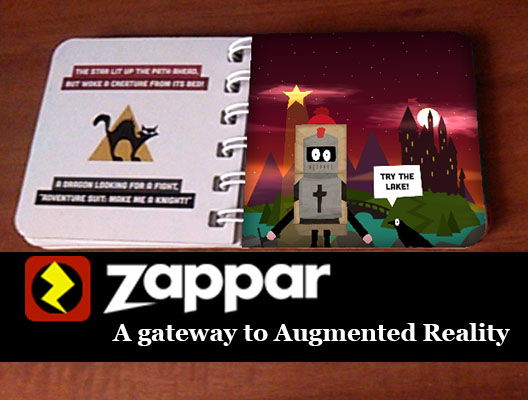 Those who have followed my articles knows that I personally thing Augmented Reality is the path to the future, rather than Full Immersion Virtual Reality. Or, to be more precise, I think FI-VR will be implemented through AR.

I have followed the VR/AR technology advancement closely over the past decade and a half. I have seen the rise and fall of many devices and seen many failed attempts at implementing both. Some have been more successful than others, but none have really caught on enough, for different reasons. The PS3 game Eye of Judgement got me into Augmented Reality and I realized how that could be implemented into other situations.

It wasn’t until the advent of the Smart Phone that I saw the real potential in AR over VR. With wearable technology, such as Google Glass, the technology really reached its full potential. And now we have our very own gateway into that technology, in the form of Zappar.

Using a smart device’s camera along with a unique tracking code, Zappar can augment any surface. From interactive wedding invites to self-updating delivery menus and semi-virtual pop-up books, the limitations of Zappar is truly in the imagination of the developer.

As a user, the app is simple enough. When you spot a Zapcode you take up your phone or tablet and scan it using the Zappar app. Then you can interact with whatever it brings via touching the screen or by moving the camera around. The true strength in the app is from a developer’s standpoint though. The tools provided by Zappar are extremely powerful, and comes in three stages ranging from technophobe level to professional developer level.

At the simplest level you don’t need any technical knowledge at all, it’s all point and click. Zappar will lay everything out for you. The limits of this is that you have no control at all over how it will look in the end, and it does look rather simple.

At the intermediate level you need some knowledge in image editing and layouts. The editor is almost identical to the first one, but you get to decide how everything looks, where it is positioned and you can add multiple levels to it. This allows you to create multiple “pages”. It is still somewhat limited in that you can only put out so-called “billboards”, flat images that are always turned towards the camera.

The most complex editor is the Zappar Studio. Here you can create your very own applications from the code and up. This allows you to create far more complex things, I even managed to make a small game of Tic-Tac-Toe less than a day from first installing Zappar Studio. You’re not limited to the standard “billboards” here either, you can implement your own 3D models and animations. This is almost completely unlimited, but can be very hard to get into, especially if you have no prior programming or modeling experience. As Zappar Studio is still in a beta stage, it is being constantly developed, improved and documented. As of the time of writing, the documentation does not cover a lot more than the very basics of its scripting language (which is based on JavaScript) and the very basics of the methods.

My hopes are that Zappar will be the go-to application in the near future for interactive handouts. I see a great potential in the simple-to-use editor, which is powerful enough for even those who are less technically adept. I can see great use in the fast food industry, where even smaller chip-shops could make interactive delivery menus that are guaranteed to always be up-to-date, even years after they are sent out. I can also see it being useful for establishments like hotels, stadiums and similar to have a zapcode that automatically loads a map for the user with directions from their current location to the establishment.

It could even be as simple as having a zapcode on product packaging that brings up the option to save all contact information about the company on your phone for quick interaction with your buyers. Or, if the product is of the technical kind, bring up the instruction manual.

All of these things are possible right now with the Zappar and even more functionality is added all the time.

The main contender, as I see it right now, is the QR code. But the QR code is rather limited, in that it is just a link, while Zappar is an entire interactiv and augmentative platform that developers can build upon. Also, a Zapcode can be integrated into an artpiece, while a QR code needs to be isolated, which can ruin the aesthetics. You can also make Zapcodes much smaller and scan them from a greater distance a lot faster than QR codes.

If you want to try out Zappar development for yourself, all of the functionalities are available in the free 30-day trial, where you get 10 Zapcodes to try out. Each Zapcode can be edited after creation, allowing you to update information like prices or contact information. After 30 days, if you want to continue, you can upgrade to one of the following plans:

Standard: 30 new Zapcodes each month for £60/mo. Great for small-to-medium advertising firms or for advanced developers that need a fair amount of new codes (rather than updating already existing codes).

Advanced: 120 new Zapcodes each month for £120/mo. If you chew through codes like nobody’s business, then this is definately the pack for you. This would be for bigger marketing firms, big producers, advanced application creators etc. where you need a lot of codes.

As a user of Zappar, the app is completely free. You can get the Zappar app at the Google Play Store for Android or the iTunes App Store for iOS. If you wish to develop Zappar apps, check out the website.