(Reviewed on PC with a Press Code)

Many words have been said about this game throughout its development. Being a game funded by and built on nostalgia it’s not to surprising. But anything made after the fact, anything built to ‘recapture’ the wholesome, presentness of the past, will always fail to do so because nostalgia always wins over all. Although, luckily for me in this case, the first time I bought a Nintendo 64 was last year (in a bundle of older console retroactive buys) and I still have never played the game Playtonic aims to emulate, “Banjo-Kazooie”. But I still found myself feeling a sense of nostalgia for the platform games of old while playing, (for me it was “Jak & Daxter”). So I guess nostalgia will be coming up over and over in this review either way. But that doesn’t mean the game will get off scot free. Even with a tenuous recommendation. 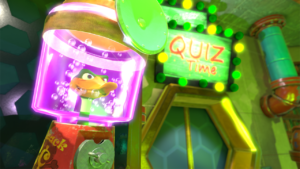 The game follows Yooka and Laylee (going for a tied together pun this time) on a quest to collect pagies for a magic book because I’m guessing cash. Why they would bother doing so at the start is vague at best but as the game progresses it becomes a loose ‘save the world’ narrative. That’s pretty much it for plot. It has that old style of plot where it was less written and more just something was needed to string everything together. It works fine in the context of the game with it being an exploration heavy game. It has enough drive to keep you going but not the urgency to rush you through. It also means that when the big bad of the game (the corporate bee Capital B) is defeated, you can just go back to the hubworld and go on with searching for the rest of the collectables.

The dialogue and writing itself on the other hand is more of a mixed bag. A lot of it is based on in-jokes and callbacks, so again rises nostalgia. The earliest example of the nostalgic push in the writing is in the intro cinematic, where the big bad machine that the antagonist uses is named as the Novelizer 64, (“You see? N64? You see what I did there?”) The number 64 comes up over and over again, like on the helmet of a cloud you race for prizes. Sometimes the old jokes gets a laugh but at others you can feel the kickfunded, nostalgic nature on every word. On that, every now at then you read a line that was there obviously as a kickstarter prize. One of the obvious ones was catching the “Crazy Kirkhope” pagie. (Grant Kirkhope is the most noted of the games composers.) It doesn’t get in the way but it just doesn’t get a reaction at all either. Just made me want to skip the dialogue because most of it says nothing. Just being the equivalent to verbal padding. Considering the spoken dialogue is ironically just vocalisations (grunting, humming, whistling, etc) I feel like I’m not missing anything when I skip lines. All the characters could have been silent like a JRPG and I think it would of lost nothing. Which ends up moving the dialogue to being tragically ironic considering related events. But with that want to skip comes the issue that every now and then there is an important piece of hint dialogue to find some obscure item. With the nature of a collectables game being that the developers hide things, you just have to sit through it sometimes otherwise you’ll find yourself scouring every centimetre for that one last collectable. At current, I have two maps at one remaining quill so I’ve ended up doing just that. 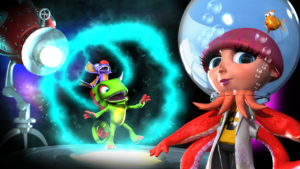 Moving on to the characters themselves, they are well designed and have a cartoonish look that fits well in the (to use a word) rubbery world. There is a hubworld with the teleporter rooms set up to highlight new skills connected to each world, like the water room for learning the underwater skills. Like the characters, each world is well designed with a forest/grass world, an ice world, a Halloween world, a casino world and a space pirate world, each with their own colour, design, characters, traversal and specials. It makes each world feel distinct while having some connecting elements (like Dr’ Puzz and her D.N.Ray transformation machine) that connects them all together. The only major criticism I have for the worlds is that they need more restriction of all things. Considering, by the end of the game, you can fly and that invisible walls barely exist you will find yourself bouncing off the ceilings push-back and ending up on roofs that didn’t expect you to land on. Even before that, just before the half way mark of the game, you get given a high jump and glide ability. From that point on, through searching for collectables and trying to find the thread of logic to where they hide the last few items, I managed to get myself off and out the map all the time. This is were the biggest and most glaring point of this criticism comes in.

With the game being ‘funded by and built on nostalgia’ it apes the game design of old. Problem is, it makes the game feel old. The maps are big, expansive and (world to world) varied. But with the modern abilities and smooth graphics you’ll end up getting out of the map, falling in the inescapable death oceans or just getting stuck not knowing or seeing where to go next. For example, back when “Banjo-Kazooie” came out on the N64 there was only one joystick so no camera control. Now you have two so you actually have camera control but the camera is a wild beast that keeps getting stuck on the senary and bounces around in tight quarters. Because of that, for a while I couldn’t work out how to get to the world 4 hub section because the camera, combined with a rooms dark lighting and tight quarters, I never saw the simple shadowed pathway to it. Although, if the whole thing was de-rezed to the just about polygonal era that it’s predecessor came out on, it would have been easer to see. Looser shading from a weaker lighting engine, clearer corners from being made of cubes and less stuff on the walls with less detailed textures. The modern graphics end up being a hindrance to the playability because the old design was as it was because of the old tech. Transferring the old design to new tech sometimes just don’t work as it’s not conducive. That goes for any game. And that brief comment saying you have two joysticks means that this is a game that’s ‘controller preferred’ on PC which makes it end up on my ‘special list’. In my opinion, it’s ‘controller mandatory’ as it would be unplayable with a mouse and keyboard.

With all that said, this game is… fine. The best way to describe it is that 80% of the game is artfully designed with core structure and solid base that holds true throughout, making it a well built adventure throughout. The other 20% is a camera that get distracted or tied up with and a level design that is at times very dated and feels loose on that sold core structure. 80% of this game varies from ok to absolutely fantastic. 20% makes me want to hate it. And even with that 20%, I had immense satisfaction completing that bad sections and (literally) telling the game to ‘get fucked’. 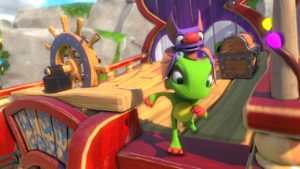 “Yooka-Laylee” is adorably nostalgic. It’s a game that was built on the game styles of old but makes it bigger then ever. But doing so ends up highlighting the age of the game design. The collectable adventure style of game is one that is increasingly showing it’s age when surrounded with modern design and technology. I do recommended the game but with caveats that need a little explanation and a thought experiment with a return to the opening paragraph.

The game was funded by and built on the nostalgia of the old Rare games from 15 years ago, specifically “Banjo-Kazooie”. Will it ever stack up to ‘Banjo’ 1 or 2?

Will is ever stack up to any game Rare made 15 years ago?

“Anything made after the fact, anything built to ‘recapture’ the wholesome, presentness of the past, will always fail to do so because nostalgia always wins over all.”

This game is far from perfect. I can see why some critics might end up tearing it a new one. After all, I said there is 20% of the game that makes me want to hate it. But the other 80% that’s fine can’t be disregarded. Depending how rose-tinted your eyes are, that 80% will swing from making you teary for your childhood to being just satisfactory and adequate.

The game overall is fine. The characters control well while being sometimes over-written. The core and base mechanics of the game are well built while the design is at times extremely dated. It’s not going to end up on any best games lists and it was never going to in my view. It’s a nostalgic game that does exactly what it aimed to do. No more, no less. If your looking for an artful game for your nostalgic moments, then this comes recommended. If your not nostalgically looking forward to it then it’s not. And, considering the kickstarter, you probability weren’t interested in it in the first place.