Available for PS4, Xbox One and PC.

(Played with a Press Code for PC, Steam Early Access.)

Going into this beta I was expecting a few bugs, but with a prospective release date of April, the 4th if the Steam release schedule to be believed, I was expecting a ‘fairly’ complete game. What I got was a mixed bag.

There was a few plot elements presented in the two missions there but it was all without context which can cause a few problems. The first is that I can’t judge the story as there was nothing there to judge. Fair enough, it’s a beta. It’s what you want to do to keep story elements secret. The flip side of the coin is that it can give away enough to guess the plot tropes it could do. From what I could make out, here is a few points of where I expect the full story to go. The enemy is Russian so there has to be rogue agent or General. No writer worth their salt with throw the whole Russian state under the bus so there is a rogue ‘something’. There there’s a captured friend/ally behind enemy lines so he’ll either go turncoat or die. Considering the modern/grim style of the game I’m going with die. Will be impressive if you actually rescue him and it’s the end of that story line and he’s not just a “raising of the stakes” character. Most of what I saw from the story was a pretty standard, mostly a generic modern warfare story. It’s not bad thing. It just doesn’t score any points or favours for it. 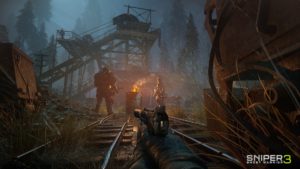 After that, the only other complaint for the game itself I have is that the graphics is still very buggy and, on the higher settings, badly optimised. I managed to find many graphics bugs, the most notable and common being texture warping at edges, like ‘climb down-able rocks’ and such, and clipping issues around movement and animations. Another annoyance around the graphics was that the render distance was only a 100 or so meters. Considering that one of the bonus experience mission parameters was to shoot from over 200 meters, it was near impossible to complete just because the game didn’t render that far. I saw in the shooting tutorial video at the start of the game a few shots from over 400 meters so I’m more inclined to connect it to the ‘bad optimization’ and they have no intention of the render distance here being any where near the full game intention.

Otherwise the graphics are fine. As with the story, they went for a modern warfare vibe so there’s a lot of soldiers in camouflage and generic military garb. Same can be said of the guns and locations. Generic military facilities, manned by generic soldiers carrying generic guns. Again not bad but scoring no bonus points. The sound design and character voices are much the same.

Where it does score bonus points is the shooting mechanics. The shooting at close range, especially with the shotgun, feels visceral. The shotgun has kick and is a one shot kill in close range so it feels like it has weight and punch. The assault rifles feel the same if you go for a sustained fire rate. Otherwise they can just be a replacement for the silenced pistol but with more bullets per clip. 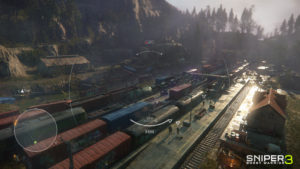 The sniping is where you’ll do most of you shooting and the best way to describe it is as ‘simply complex’. Bullet drop and wind bending are in full effect so you have to counter aim when shooting over long distance. There are scopes you can get that have a distance gauge that shows you how far you need to counter aim when you set it to the distance to your target. It’s easy and simple to understand and do when your playing but you have to remember to do it all in sequence or you’re guaranteed to miss. Once you get into the habit of ‘check, counter, hold, fire’ you’ll never miss. It makes the shooting more intense and realistic.

Using this as a sign of where they want to go for the full release leaves me in an optimistic mood. As it’s a free, by application beta I was expecting a few bugs. In some cases there was more then I expected, like the numerous graphics issues. But in others there was a lot less then I expected, like the largely release ready shooting mechanics. A qualm of mine of the whole beta generally is that this was a demo. Map was limited and cut extremely short, you were given almost limitless money to buy everything from the offset, two missions cut from a random point in the game, this was a demo. It’s sad that I have to call this out for a game that is most likely going to be very good when its out in full but this should of just been a free demo instead of free beta. But some of it is so clearly unfinished it just ends up being a beta demo, a demo were the demo isn’t even finished. In this age of Early Access people are keen to get their games out as soon as possible but sometimes is best to just refine a demo and release that instead of just going for a beta and release a section of the game as is, warts and all. It’s just an ending thought I wanted to end on as this was one of the clearer signs to that sort of culture within development.

I look forward to playing the game in full when it comes out in April.