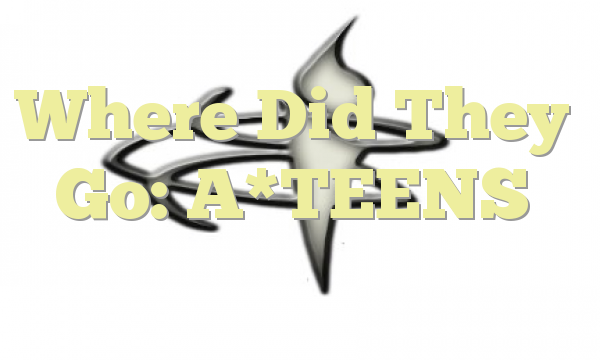 Welcome back to Where Did They Go, the series where we take a deep dive into the artists that you probably forgot you remembered and find out what happened to them after they fell off the shelves in the record stores.

This time we’ll take a look at a band so controversial they had to abbreviate their name: A*TEENS.

A*TEENS started out as the ABBA tribute band ABBA TEENS in 1998, focusing on making dance versions of old ABBA classics, such as ‘Mamma Mia’ and ‘Dancing Queen’. Much like the original, ‘Mamma Mia’ topped the charts in over 10 countries, including both A*TEENS and ABBA’s home country of Sweden. The debut album sold platinum in over 22 countries, making ABBA TEENS a household name.

Despite ‘only’ selling Gold in the US, that is where their careers would really take off. In 2000 they embarked on a promotional tour in the US, where they were almost immediately invited to follow Britney Spears, the then topping artist on the US charts. They were also invited to several kids channel networks, such as Nikolodeon and the Disney Channel, to perform live. That month they received the Viva Music Awards for Best International Newcomers, snagging the trophy from Christina Aguilera and Blink-182.

It was after they hit Platinum in US in 2000 that the band decided to change their name and start making their own songs. ABBA TEENS became A*TEENS and their first original song, ‘Upside Down’, would become the band’s signature song. The song sold Gold in less than 3 weeks in over 10 countries.

When the band came back to Sweden in 2001, more awards followed and they released their second album ‘Teen Spirit’, a throwback to Nirvana’s signature song ‘Smells Like Teen Spirit’.

‘Teen Spirit’ hit number 2 on the charts and millions of copies were sold. They had a promotion by Pepsi, with over 15 million cans with their faces sold worldwide and they had soundtrack deals with Disney. They had famed songwriter Cathy Dennis write songs for them. This did not bring them back to the number one spot and by the time their third album, ‘Pop Til You Drop’, hit the shelves, they were back to doing covers of more popular acts, such as Alice Cooper’s ‘School’s out’ and Elvis Presley’s ‘Can’t Help Falling In Love’.

‘Pop Til You Drop’ was the only album that lead to their own tour, despite the album only being released in US, Sweden and Australia. It would take until 2002 and a huge popular demand in South America for the album to be released to more countries.

‘New Arrival’, their third international album, was a throwback to the popular ABBA album ‘Arrival’. This was not the only connection to ABBA though, as Björn and Benny, the two “B’s” of ABBA, wrote the music for A*TEENS’ cover of ‘One Night In Bangkok’.

Following the release of their ‘Greatest Hits’ album, the band announced a two year hiatus. During the hiatus, the four members released solo songs and albums. Marie Serneholt, the lead singer, was the only one of the four to have a successful solo career and towards the end of the hiatus, she announced that the band would not get back together.

Where Did They Go?

Marie Serneholt appeared several times on Melodifestivalen, the Swedish take-outs for Eurovision Song Contest, both as a host and artist. She released two solo albums and in 2012 she became one of the judges on the Swedish version of ‘X Factor’. In 2013 she took over the role as host in the very popular Swedish bingo show BingoLotto, broadcast weekly on national TV.

Dhani Lennevald is still working with music, though only one single was ever released associated with his name. In 2005 he also started working as a model and in 2008 he moved from Stockholm to Los Angeles with his then-girlfriend and supermodel Natacha Peyre.

Sara Lumholdt took a short hiatus from the limelight after the breakup of A*TEENS. In 2005 she was one of the Swedish voice-overs for the Electronic Arts racing game ‘Burnout: Revenge’ and later that year she would open World Cup days in a local sports club, ‘Ballbreaker’, by singing the Swedish National Anthem before the games. She was one of the first artists in the world to release a single for free online, as her single ‘Glamour Bitch’ was released on her MySpace profile. Today she still works with music, in addition to being a poledance instructor and the host of Xtra Factor, the aftershow for X Factor.

Amit Sebastian Paul released five singles. He’s the only member of the band to not have his own Wikipedia page and there are hardly any mentions of him at all in the worldwide media. At the moment, he’s not active on the music scene, but he does travel around the world talking at universities about green technology and alternative chemicals, for which he has a Masters Degree.