Hello Torch! Quite a varied week if I do say so. All I can really say about is quote the UK TV “QI” man Stephen Fry and say “Be lovely to each other.” Anyway, on with the news.

I may not seem like much, or it seems very serious after Boston. Police and bomb disposal were called to a box that was left in Arizona. Imagine what they thought when they saw this; 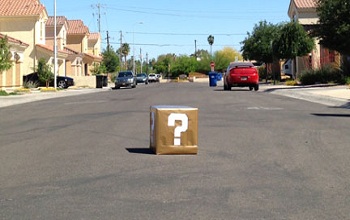 “Lt. Scott Smith the package was found in the roadway in the area of Spence  Avenue and Newberry Lane, near Apache Boulevard and Rural Road.

All that was in the box was “paper” thankfully. Not sure if this was a prank or not but it is it really something that the gaming community needed? Some gamers may get the sentiment but after Boston it was bound to cause a stir.

Peter Molyneux’s “Curiosity: What’s In The Cube?” is an odd social experiment game. If you haven’t heard of it. It is a game that lets players slowly chip away at a giant cube with “a life changing” message inside that only one person, who chips away that last block, will see. That is what Peter Molyneux, creator and head of company 22Cans, said. Players can buy quicker ways to chip away the cube. But now people can buy ways to put blocks back. It’s an odd move and we can only see what the outcome will be from the gaming public.

“World of Tanks” may be snubbed by some of the MMO crowd but with 45 million registered players at the end of 2012 it is big. The company behind the game “Wargaming” has admitted to a security breach “that some personal information may have been compromised due to a security incident.” After telling the community that launched a “Change You Password Event” “During this event, every player that changes their password will receive 300 [in-game currency] for their account.” It’s good that they told everyone and they gave an incentive for all their players to make sure they where secure. It certainly is a way to handle a security breach in an MMO.

A “Skyrim” Mod With Shells;

Mods have been going round a lot with “Elder Scrolls V: Skyrim”. So here is another one. A “Teenage Mutant Ninja Turtles” mod.

How Pokemon Eat Their Foor;

“A Machine For Pigs” This is a new game from thechineseroom, the company, that made “Amnesia: The Dark Descent”. It’s another horror game like “Amnesia” so if you liked the first, you should like this one too.

“Saints Row IV” Volition senior producer Jim Boon responded to comments made by Cliff Bleszinski, who suggested the game should tone down its more juvenile elements, saying, “I think our tone is an element of our success.” This is good because since the GTA series left parody and went to satire, it’s good to have something that is cartoony and over-the-top.

“Far Cry 3: Blood Dragon”  is getting a stamp approval from me by having actor Michael Biehn involved with the game. He is in the Dev diary but also voices the lead Rex Power Colt, a cyborg commando. Really a game to look out for.

“Link To The Past 2” Yes, Nintendo has said they are doing a sequel on the 3DS, maybe by the end of the year.

“Neverwinter“, an MMO based on the “Dungeons and Dragons” (Not DDO) could be in open beta by next week. This has always been an MMO to look out for if you an MMO fan.

I will end by saying…

Well that’s it for a week. A lot was cut out but I might be making next news blogs in to videos. Big maybe but there is a chance.

Anyway, see you next time,