“Volume” has been out for some time. To the point were there has been free PSVR DLC called “Volume: CODA” and lead developer Mike Bithell has moved on to his next game “EarthShape”. So this has become a bit of a retrospective as well as a ‘lost post’.

“Volume” at it’s core is very simple, both in story and in gameplay. The gameplay is a mix of a puzzle and stealth, leaning more to puzzles. I can’t remember how many levels I finished while running away from enemies so stealth (at times) can be an after thought. The puzzle elements are the main part with game getting progressively more complex with each level. I the first levels your just up against narrow sighted solders but by the end you’ll be up against enforcers, laser grids, key puzzles and patrols. It’s very well designed as each new puzzle element is presented by itself for you to learn a way round. It may sound like simple and obvious but many elements come from the same character. For example, the sniper enemy is introduced and its main difference is it has a long but very narrow line-of-sight. Simple enough. But then it starts going on patrols were it’s sight flight quickly about , catching you is your not behind cover. So when it has it’s eyes straight down a corridor with no way round you know what you need to do to get round them. It’s the simple layering of complexity using all the elements from before that makes the puzzles stand out. It means that difficulty of the game is more reasoned and doesn’t do what some stealth games do where they introduce a new enemy in full from the start so have to come up with a bigger version of the same enemy later or make an enemy with more powers. It keeps the game simple and makes it more flexible.

The same can be said for the whole design of the game. It’s made in a angular, polygonal style that is futuristic but retro but it has enough definition in the features to have each character stand out. Well, at least the ones you play as or around. Most of the story characters are just a single drawn image and voice over.

It would be a good time to talk about the story. It’s a Robin Hood allegory/adaption so you know the basics. It is the tecno-future and you are Rob Locksley, played by YouTuber Charlie McDonnell AKA “CharlieIsSoCoolLike”, who gets himself a volumetric projection kit and sets up in a warehouse. From there, he live-streams stealing from people connected with the government which was overthrown in a corporate military take-over. It was this game that really made me think that there will be a new rise of those types of stories like the ones that came from the UK while under Thatcher. I grew up in the late 90’s when they all came out so I’m just interested to see if we’ll go back to the ‘dark and edgy 90’s’. 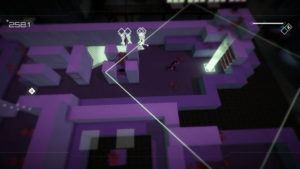 From the kit comes an AI called Alan played by “Thomas was Alone” alumni Danny Wallace. Alan is the Alan-a-Dale figure of the tale, the wondering mistrial. (If you need another reference, its the rooster from Disney’s “Robin Hood” (1973).) Having Wallace play him was an interesting choice as it’s alluded to in the game that is set after ‘Thomas was Alone’. It’s not said outright but there is a subplot about the AI’s were, years before, they grew sentience and wanted to join society. Considering the evil government gets to power through high-conservatism, if I understood the text logs correctly, that’s more layers to the allegory pie if you get the drift.

Other people from the ‘Merry Men’ are voiced but only as voices from the internet so they don’t otherwise interact with the story or with Rob. There’s the Captain/Midge (‘Midge the Miller’) played by Kathryn Maccoll who hunts Rob to the end of the game who actually makes an appearance at the end and beginning of the game, Tuck (‘Friar Tuck’) played by Jim Sterling who is a sceptic/critic of Rob, and Minstrel (a ‘Alan-a-Dale’ type from other versions of the story) played by Dan Bull who gets a couple of raps in during the game which are very good.

Their list of bad guys you steal from is long but the only voiced antagonist is Guy Gisborne (‘Guy of Gisbourne’, assassin sent to kill Robin) played by Andy Serkis. By far, Gisborne is the best voiced. Sirkis gives him a voice that intelligent but a tone that is menacing. Combined with Bithell’s script, he comes across as one of the old style villains. Intelligent, conniving and powerful, biding his time before he strikes with confidence. His mid-game speech really does what it was meant to do and brings questions about Rob to the forefront. It’s sad to say that out of all of them, the weakest voiced felt like McDonnell. He had the teen snark but it just felt too YouTuber-y and like he was just saying a Lets Play. It may sound like a petty niggle as he was doing a lets play in the games story but it’s more that. It was his rebellion and it just didn’t sound like he had the conviction. It sounded like he was just at his computer at home. From the beginning he says that he will be hunted by Gisborne and the timer until his forces arrive always comes up but he never sounds bothered. I think McDonnell was aiming for that young stoicism under pressure but it just comes across as he doesn’t care at all. Some of his best scenes are when he’s totally silent and presented more as an anti-hero, like during the mid-game Gisborne speech and the way the characters like Tuck talk about him. It’s almost an antithesis to the rest of his dialogue so some parts just don’t gel with the rest. If he talked with more of a sense that he knew he was going bad things to do good I think it would work better. 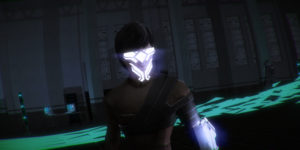 This leads to the ending. I like the ending. It captures the idea of rebellion that the Robin Hood stories revolve around. It’s a built up moment were Rob realises he has to get in fray in person rather than in presentation and when the other characters realises his full motives. It is a sequel bait kind of ending but I wouldn’t mind a sequel. The most interesting aspect of the ending in my view is the use of Alan as a digital, online entity. It modernises his wondering mistrial character type very well which can create some interesting future developments. If there is a sequel, I would hope they’d play Rob much more darkly, more as an anti-hero then here. With the way the ending sounded and went it seems like that would be the way it would go head.

The game as a whole is very good. The puzzles are well designed and it uses the idea of digital projection to it’s fullest. Having some levels as corruptions or as tests by Alan leads to some interesting designs but you can still see the warehouse around it so it doesn’t lose flow. The time trial leader board and the level maker toolbox means it has some staying power too.

If you haven’t played it yet and your a puzzle fan, this is one to get. The story is a good framing device, even with a few ineffectual lines, but Sirkis brings it home with his Gisborne and the levels are designed so the rise in difficulty is gentle but by the end you’ll be going round Knights and stealing from kings.