I was at first very apprehensive of playing this game. It being called a 5v5 online RTS ‘n’ all. I love RTS games (mostly because games like “Command & Conquer: Red Alert” was one of the first games I ever played) but all of my experiences of playing multiplayer online is getting resoundingly beaten. I’m slow and methodical in single player. Scouting out first, finding a bases weaknesses and then surgically striking with minimal causalities because of pure pride. It can take hours and I love it because I’m really that boring. The same why the only Civ III games I play are single player, huge maps with no turn finish limit because they last for literally days. Longest match was 3 days (by saves of course so only about 36 hours full) and because I’m terrible at war in that game so I’m overly peaceful which can drag it out longer. Did I mention I was really boring? The one online RTS experience that always sticks out is a 4 player (2v2) player LAN game of “Dawn of War” I played were a player built a line of barracks and mech factories to my base from the other end of the map. I guess winning online means knowing the exploits. Playing “C&C: Generals” online once led to my base being destroyed but I’m anything if not a ninjary bastard so I never was actually ‘defeated’. Ended up being less Tanya and more Spy for a match. It was fun and really tense knowing that there were two armies out to get me with only one team mate and a mistake would get me killed and defeated. Sort of an apt story considering “Victory Command” is less RTS and more squad MOBA and they are made by largely the same guys just under a different name, (DAMN YOU EA! I will never forgive or forget Westwood Studios!)

In “Victory Command”, you take control of a squad of units on the battlefield. Your other team mates do the same and that is your army. 5 players each with a squad of units against an enemy team of the same. This is were the MOBA comes into the game. Rather than having to concern yourself with the whole army, you can focus your attention on just your units and what your squad is doing. A good team works together but if your a lone player like me, and I assume everyone else is considering the amount of attention people even have to the in-game chat, then the only team tactic is to stick with complementing units. Like what I did with with my missile tanks and a jeep squad. Even their home base was not safe from us! Who needs in-game chat?

At the moment, there is only one game mode, point capture. There are three points in the map, you capture more then the other guy and you start getting points. Your team gets to 250 points and you win with the enemy base exploding for some reason. Or yours if the match went badly. The way a match can go well or go badly is mostly a crap-shoot. As you choose one of the three units before the players are connected, and everyone including your team and your enemies do the same, you may end up being the god send of your team, as I was in one match were I choose my usual missile tanks against 3 enemy jeep squads, or the guy that stays at base and has a little cry, as I was when there was a enemy consisting of infantry and other tanks. If your not in an actually team talking over Skype or something, whether you will be suited for the match or not is entirely random. Getting locked into your unit selection before connecting to a match stops people from exploiting the strength/weakness mechanics but it also means playing by yourself is akin to rolling the dice and hoping your come up with double sixes.

Going back to the first, and quite wafflely first paragraph, I said that the game is made by largely from the people who made the ‘Command & Conquer’ series. You can very much tell. They first sign is in the design. Extremely remanent of ‘C&C Generals’. When I say remanent I mean they looked at the designs they did for Generals and said ‘who can we update this to the present?’ Although, there is only a limited number of way you can make a military jeep stand out as a military jeep. Even GTA ended up just coping Jeep for theirs. They just called Geep of something and called it a day. A tactic used by the Chinese apparently. They were in Generals as the nuclear power (the Russians were taken for Red Alert) so I mean nothing by that…

The music is also very reminiscent. It sounds like if it was make by C&C composer Frank Klepacki himself.

Ok, I still don’t know who did the music but he still could of. He did the music for “Gray Goo” (another RTS game by the same developer) so maybe? Just putting in “Victory Command Composer” or “Victory Command Music” into Google just ends up taking me to the “Command & Conquer 4: Tiberian Twilight” and “Megaman X” soundtrack on YouTube for some reason. If it was Frank, I so called it!

Ok, Frank didn’t do the music for Tiberian Twilight. I thought I’d run into a subtle hint or something. He did the music for ‘Red Alert 3’. Well, he’s one of the lord masters of the RA franchise because the “Hell March” theme is his. Anyway, what was I talking about? Oh yeah, Victory Command… 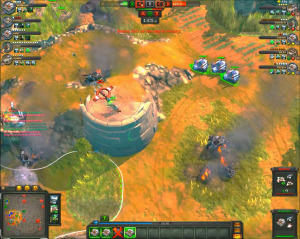 While I was concerned at playing Victory Command due to how bad I was expecting to be at the game, I was pleasantly surprised. Although it’s more because they are miss-labeling the game a wee bit. It less an RTS and more a MOBA with RTS mechanics. You defend your alleys from an enemy groups, with a set ‘hero’ placeholder to hold positions to get victory points. The RTS mechanics just changes how the game is played and how you react. For example, the enemy gaining XP to upgrade abilities as in other MOBA like DOTA2 and LoL is not a problem in this but dying is still a big problem because this is hardcore mode so when die you stay dead. Units from your squad that die in the match stay dead for the remainder of the match which weakens you, and therefore your team.

“Victory Command” is not an RTS but it’s not a MOBA either. It’s a strange merging of mechanics and styles that makes something new. Fans of either genre can easily get into the game but uber-fans will criticize the missing parts that were lost in the fusion. As the beta stands now, it has its niggles but that’s more in the balancing and the matchmaking. But as someone who loves RTS’s but really doesn’t like MOBA’s, I really like this game. It has enough of each genre to entice people in and have them play. What I fear for the game is that it doesn’t enough to keep them there. More types of units and more match types are a must. As it’s in beta the product could be far from finished. Just let there be more when it comes out in full or have the game have regular updates after release. Drawing players in is one thing. Keeping there there is another.