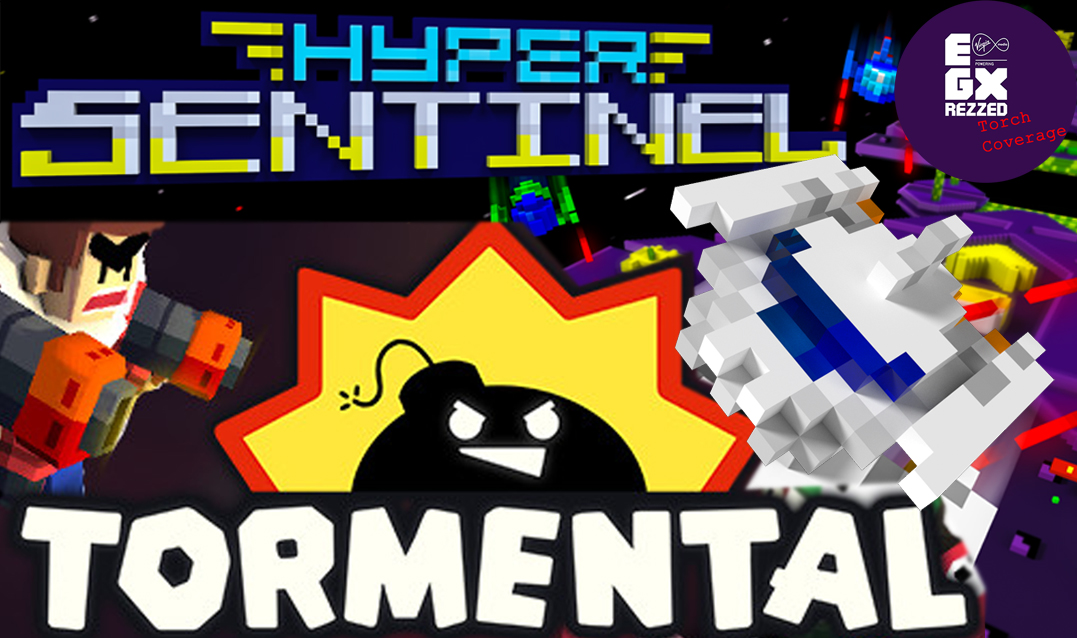 Tormental
Developed by Gungrounds for PC and XBoxOne,
Published by Croteam Incubator

Retro styles in games has had a resurgence, while the idea of a retro game is a little vague. The usual idea is that after 25 years things become retro which is why it’s weird to see that 2.5D shooters are becoming cool again while that at the time it was just how far graphics were at the time. It’s like saying the polygonal style of the PS1 era is cool again… That’s the best segway I can think of as here’s two games are retro inspired. 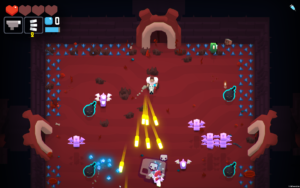 The first is “Tormental”, a top-down twin stick shooter. For the demo there where three characters. I tried all of them but the one I liked playing as was, and your not going to be surprised when you find out who publishes the game, Serious Sam. So yeah, the game is published by Croteam. Specificity Croteam Incubator, their indie publishing arm.

The inclusion of the Serious Sam character is more then just as a reference as when you select to play as him some of the enemies change to become enemies from the Serious Sam games. From the way the game is advertised, Sam is a big part of the draw. But that’s not to say that that the other characters are bad. Just that the traditional style of the twin-stick is in Some more and less so having the more niche mechanics.

On the mechanics, they’re fine. I have nothing negative to say on them as the developers, Gungrounds, are well versed in the genre having made other twin-stick games in the past. There are a few things that a different that break the mould like the random generation of the rooms and the upgrades. Each level is randomly generated but constrained in what enemies it can use to populate it for the sake of constancy. Then there’s the upgrades, some of which appear randomly as super-weapons and some are gained after levelling up (getting a set amount of points) that are more permanent, like speed and damage upgrades. Its a good system that works well, with there being enough to keep the sense of progression and slow enough that it doesn’t become to easy to cut down the waves.

On the difficulty, it’s hard. Not necessarily because it’s ‘retro hard’ but more so because some levels are so stacked with enemies that the bullet-hell aspect of the twin-stick comes to the forefront. One level that stuck out was a mini-boss room that involved 4 or so large charging enemies that where the mini-bosses. When you killed them then went into a ‘ghost form’ that you couldn’t kill but they could attack you and they would be cleared when the room was complete (when all the bosses were dead). On top of that there where randomly spawning small enemies that would appear, charge and explode at you. So it came down to a simple case of dodging and prioritising shots. But the room can get to filled with enemies that there’s little manoeuvring room. 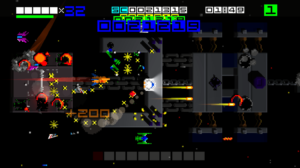 Hyper Sentinel is a similar deal but with side scrolling shoot’em-ups. You are a small ship shooting at a big ship, first shooting away the emplaced defences like turrets and then kill the boss/s. There’s also random ships that appear and fly across the screen that you can kill as well who bring most of the upgrades and shield (health) items. The upgrades are ones you’d expect, invulnerability, spread-shot, and beam cannons which can be a swift enemy clean up when you get it.

The difficulty is on that fine edge of retro hard as well, being something that was designed to be tough to do just from a ramping up of pace and enemies, (the ‘spawn more, fire quicker’ method). So like Tormental the bullet-hell aspect can come to the forefront but it’s there in the genre already. It just what makes it hard.

But there’s two main ways to play, one is an ‘arcade mode’ where you fight the big ships with regenerating health (so you can just go to the edge of the map and dodge roll until your health comes back if needed), but there’s a hardcore ‘survival mode’ where the health regeneration is taken away and there is no big ship to kill. The enemies just don’t stop appearing and get stronger over time. Upgrades are more prevalent in this version but that’s because of the increase of shield life-ups.

But while talking to lead developer, Rob Hewson, I became privy to another play mode that at time of writing is just announced; Mixer Mode. Mixer of the Mixer Mode is Microsoft/XBox’s live streaming platform, (you may of heard Phil Spencer at E3 talk about it a lot). So with it announced, I can talk about it.

‘Mixer Mode’ takes some cues from some of Twitch’s event games like ‘Twich plays Pokemon’ or ‘Twitch plays Dark Souls’ and combines them with audience participation like ‘Jackbox’. When a streamer streams the game on Mixer and plays in Mixer Mode allows their viewers to join in. Viewers will be queued in to play as either a defender or an attacker, defenders tasked with powering up the streamer and attackers tasked with killing them. There’s even a special attacking class called the ‘Mixeroid’ who’s job is to crash into the streamer, controlling it with an on-screen virtual joystick. At the end of the match, the teams are cycled so it’s not the same people over and over.

Everything that spawns in this mode is from the viewers so if an attacker wants to go light or if a defender wants to spawn a bunch of beam upgrades that’s their prerogative. To counter that, there is a leader board for top attackers and top defenders, and when you hit the streamer your name flashes up on screen with the impact giving recognition to who ever took the swing.

It really is an interesting idea and is a big progression in how streamers can interact with their audiences. It’s the natural progression for things like ‘Jackbox’ or ‘Twitch plays’, a move from chaotic tangential participation to playing alongside the streamer. As a criticism of it, as I said before, the viewers can easily (to use a phrase) ‘troll’ the matches by doing nothing so nothing happens so maybe some AI controlled spawning might come in handy but I think it depends on the type of audience a streamer has. It’s just consideration of mine as ‘stream sniping‘ is possible (while a contentious issue) and can cause annoyances on the side of the streamer, and ‘trolling’ matches is a section of that.

Even with that, the mode is a big move and one that can cement Hyper Sentinel as a must have game for streamers. And that’s after it just being a fun and well considered game. Would mention things like the graphical modes like the ‘Spectrum’ and ‘Commodore’ modes but this piece is getting to long as it is.

Both Tormental and Hyper Sentinel are games made with the retro in mind and can fit into the category of ‘retro hard’ and they’re are both fun and addictive experiences.