By now, I’m no doubt aware, you’ve seen the latest reveal trailer for the next instalment of the Call of Duty franchise. The trailer on the official YouTube channel has been seen just under 7 million times at time of writing.

I have been quite the critic of the series for a few years now. My stance has been that the game is now purely sold on the multiplayer, which is now at a polished shine and is one of the best small arena shooters on par with the likes of other legends like Counter Strike, but it has a vestigial and useless single player campaign that is so terrible it’s to the point of it being self-parody. The part of the latest CoD games has been liking is the Zombie modes.

But when I saw the latest trailer, I liked it. The tecno-industural future style has always been an interesting aesthetic to me, and now they’re really going with it. The move to having fights in space and space stations is also a good move. It shows some advancement from fighting nondescript terrorists in a nondescript Middle Eastern state or fighting a Private Military Company (PMC), in an allegory around full capitalism.

Me liking what I saw was at odds with much of the base if the YouTube ratings are to be believed, with 3-in-5 not liking were the series is heading. Especially considering that I haven’t liked the franchise for several years. This was when it struck me. I like it and the base doesn’t because this isn’t a Call of Duty game. The bombast and self-awareness of the Black Ops series isn’t here. The pure grit and anti-capitalist/militarised tones of Modern Warfare and Advanced Warfare isn’t here either. This is a different beast. And it’s not Call of Duty.

To be quite frank, and going back to a point I mentioned earlier, we all really know why the series is still around, why the series still tries to be relevant and why people still buy the name. The multiplayer. As I said before, it’s polished to a shine and is now one of the best of the business. But with its deals and ties with e-sports, it can’t change. It’s stuck in its own entropy so the rule set can still stand year on year. But the single player wants to move forward and progress its story. Even the Zombies mode brings in its own audience as streamers and YouTubers try to find all the secrets and get to the story ending of each new map.

So now is the perfect time to end the yearly releases. End the cop-out single player and four-player modes. Not as a call to bring an axe to the franchise. It’s time to divide them up and let them go their separate ways.

The multiplayer could move to a solo-packaged and cheaper option, dropping all the stuff most of the multiplayer bases doesn’t play, like the single player and additional modes. It could move to an online space as a paid game that sells additional cosmetics and map packs, the way it already does business with with its monthly DLC with the audience share it already has. The recent glut of MMO styled console games like Destiny and The Division has proven this can work. Especially when combined with the polish the multiplayer already has.

The Zombies game mode could have its own box, again packaged with its own DLC, gaining the ability to sell itself to the audience clambering for another four-player co-op game and those who want a modern shooter zombie game. This could also leave the Zombies team to go further afield and delve more into other mythologies and play styles, like the Cthulhu inspired Shadows of Evil or the gangster styled Mob of the Dead. 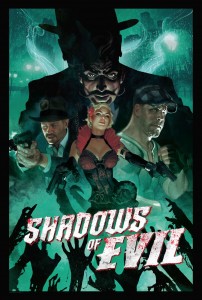 This leaves the single player with the ability to drop the pretence of being a Call of Duty game and become something else. Not being tied to the multiplayer means it can change it mechanics with new games. It also means it can have more than a year to make a new game, not having to write with cliché and stereotype, and progress narratively.

As the series has been going on for so many years, with the modern warfare variant starting way back in 2007, each aspect of the the games has had the time to become good in their own right. But it’s now getting to the point where each aspect is getting in the way of others, blocking any chance of progressing past were it currently stands.

The series wants to move on. But in keeping the stamp of Call of Duty, the call is slowing becoming a wail. Not of pain or from some mutated version of its old self. It’s of sadness in having to put on the same old mask every year because selling the games under a new name is too risky, or letting the kids move out and letting multi-CoD redecorate isn’t loyal enough daddy Activision.