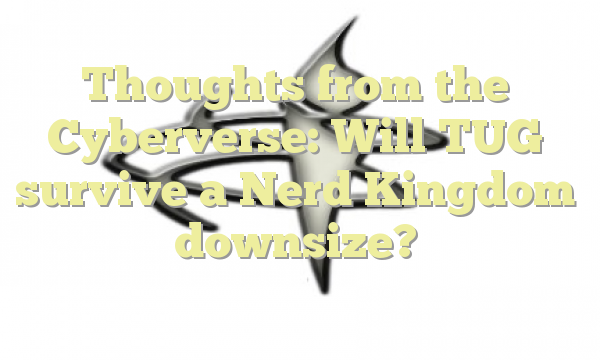 Following the disastrous fall of developer Winterkewl Games and consequently the game Yogventures, gamer team Yogscast decided to put all their effort into backing a similar game, TUG. TUG developer Nerd Kingdom announced a few days ago that they will effectively halve their development team, despite increased sales and support.

From the Kickstarter update on the TUG page:

Good news: We have had consistent stable growth in sales and play time over the past 4 months. With more and more people now noticing the game, and our attention to feedback and play behaviors, things are starting to REALLY look amazing. New terrain is coming online, we had a leak from Azzy, lots to do in order to improve it. But, finally, we are free from those blasted sharp angle blocks. Networking is also on its way shortly, and this will be the first time we actually have networking running with a “traditional survival”.

The modding API is looking fantastic, with more and more members from the Minecraft modding community coming over to support us, and more YouTubers now taking notice and sharing the project as well. To those of you that have been helping us push TUG, thank you so much; you know who you are.

This preface gets your hope up, before they start talking about the bad side:

The not so good news: A round of funding, that was to come in, to sustain us clear through the end of this year was held back by an investor. The deal that would have gone through would have lost us all control and ownership and we are not huge fans of being owned by investors like this. Sadly, we need to cut off a few limbs to be able to ensure this does not happen.

Despite Nerd Kingdom claiming this was done so that the “core team” can be independent of outside influences and to have complete control over the game, they announce in the same update that they are talking to some big-named publishers for a possible deal.

Because of the increased time in development and the huge leaps in technology they need to take to get the development forward while still gain a certain growth, the team has also decided that from the October update and forward, with the advent of Multiplayer, the game will double in price from $10 to $20.

Voice of the crowd

Comment around the web seems to show reasonable concern for the future of the game. They draw parallels to the earlier cutoff made by Double Fine Studio for the game Spacebase DF-9, that went from Alpha to Release with a bulk of the promised features held back after a major investor pulled out.

Others show concern for how a delayed development will affect the game. Since it is competing both in users and in developers with the now Microsoft-owned Minecraft, there’s only so much room for rise in number of users. With a steady price-tag increase on top of this, it will be hard to maintain the increasing user-base for a sustained time. If they can’t keep up with their rate of new users, they will need to rely on investors, and very few investors want to invest in a game that won’t pull in any more revenue.

Because of the earlier point, some commenter have shown fear of the game adopting a subscription model. This would keep their revenue somewhat stable, which will make the game more attractive to potential investors, but it would also drastically reduce the number of active users willing to pay for the game.

Some people think that the rise in number of users doesn’t have much to do with increased sales at all, but is instead a result of the numerous keys given away for “free” following Yogscast’s switch from their own game Yogventures to TUG as well as other promotional copies handed out.

Many are concerned about the price change, since it will bring the price tag up to what many other indie games cost today, with the difference of TUG being in a pre-release state. There’s still no promises that the game will look anything like promised, or envisioned by the person buying it, when it is finally released. This concern is amplified thanks to the increased development time. Before this update, it was said that the rewards would be released by January 2015, something many has taken as the precursor to the final release, hoping for a release in Spring next year. With this update, the rewards have been pushed back “a few months”, which in all probability means we won’t see a full release of the game until, at the earliest, late next Summer. A whole year to wait to see if buying a game for what many considers “full price” is worth the price is a lot to ask for.

Most people seems to be in line with what Nerd Kingdom stated though. This is not the end of the game, nor the publisher and these changes might be for the best of the game and the community as a whole. With Nerd Kingdom still in charge, they can continue down the line of a community driven game, with a lot of user customisability, just like Minecraft.

I love Minecraft, Kerbal Space Program, StarMade and a host of other independently developed games for their customisability. Heck, I love AAA-developed games for the same reason. Just look at Diablo 1 and 2, StarCraft or Skyrim. They are all modifiable by the community and they all have had a really long lifespan because of it.

When Notch wanted to pull out of Minecraft, he was stopped by the community. They started building onto the game and almost forced him to continue developing for it. He invited some of them to join Mojang and they continued his work, but still he wasn’t “allowed to leave”.

Kerbal Space Program’s developers, Squad, was so busy developing the features they had planned, but got bypassed by community developers. Instead of doing what many does and shut them out, Squad hired several of them to work as official Squad members.

I believe that any game that gets enough following and is community driven like this will be continued upon, even if the original developer wouldn’t be able to continue. I believe that the format itself and the popularity of TUG will mean that the game will find itself in a releasable state, no matter what happens to Nerd Kingdom or their finances.
With that said, I don’t think Nerd Kingdom’s finances is in any trouble either, they are just a bit lower than expected.All in all, I think TUG will go on to be one of the household names in a near future!