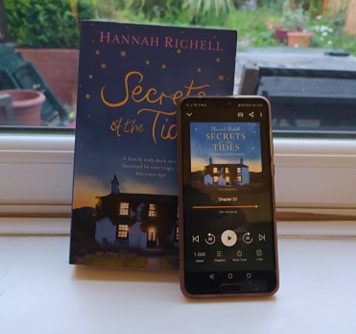 he Secrets of the Tides is a 2012 drama by author Hannah Richell and was published by Orion Publishing. It follows a newly pregnant Dora Tide and she travels to her childhood home Clifftops to confront the demons of her family’s past. What follows is 300+ pages of irritation, annoyance, anger and an ending that, while felt like some weird Hallmark moment from a TV movie, tied things up nicely.

Secrets of the Tides jumps back and forth between the past and present, and is told from the perspectives of the Tide women, Dora, her sister Cassie and her mother Helen. The less than linear path that Richell chose for the book was easy to fall into it. She presents the effect of an event within the characters, then uses the story to uncover the cause of this effect. I think this method kept me reading, if this book was written any other way I would have put it down a while ago, but wanting to find out what made Dora so closed off to her pregnancy kept my eyes on the page.

The characters of Secrets of the Tides and my feelings towards them vary. While I sympathize with Dora and to a much lesser extent her father Richard and her sister, I completely hated Helen. When first introduced to Helen, I felt so sorry for her. She’s pregnant, a surprise for both her and Richard, they weren’t married and she was meeting his parents for the first time. The meeting didn’t go well, Dorothy Tide was not a friendly woman. However, my feelings towards Helen quickly turned into a bad taste in my mouth when Helen and Richard interacted with each other. Don’t get me wrong I was totally with her against Richard. He had this old fashion way of looking at the world, uprooting his family from London and moving to Clifftops, which was his family home growing up, and he achieved this pretty much through guilt. He suggested that she quit her job and just concentrate on being a wife and mother, as well as others things, so I was on Helen’s side when she pushed back against her husband’s old way of thinking. However, she kept pushing and soon I realised that Richard was just a man who wanted what his parents had and Helen was the one who was ruthless. She is without a doubt, the most self-absorbed, irritating, anger inducing character I have ever had the displeasure of coming across in a book. Cassie did some messed up things, Richard was just a mild annoyance but Helen, I just couldn’t get past her personality, her mind and her stupidity. She is the reason everything happens..

I hated Secrets of the Tides for a while, and put the book down because I felt nothing but anger whenever I read it. Never has a book caused such intense feelings in me since Henry Black in Monstrous.

If you can get through that, Secrets of the Tides is a good book, that follows a family when tragedy strikes them. It is all about the blame and where it should be placed. Who was wrong, whose actions contributed the most to it (Helen’s), and how do you recover from such a horrible event. Are you even able to get over such an event?

Secrets of the Tides is an okay book, the way the book is written will keep you reading but that is only if you can squeeze your way through the rage caused by Helen, in what is another example of a good book ruined by an infuriating character.

Secrets of the Tides is available on Amazon and Audible.