In the realms of game design, death is usually just a way of saying that you messed up. The standard ‘failure state’ that makes a game a game rather than something you watch while pressing button prompts. So a game by David Cage, (at least recently). But death can be tool in he writers box in making the story because, well, death sucks.

The simplest way to use death in a games story, besides the aforementioned ‘you die because you suck’ failure scenario, is to kill the protagonists friends and/or family in the intro and scream “this is your motivation, now play!” To take an example, “The Last of Us” had Joel’s daughter, Sarah, get killed in the first, opening section. It creates Joel’s character and set up his motivation to protect Ellie when she shows up later on. This is done in a bunch of games which is why it can be pretty cliched. “The Last of Us” uses her death well as it’s a literal ‘the world is changing’ metaphor for Joel as well as the post apocalyptic world of the game is set in, setting up the world and it’s characters. But when a dead family narrative is placed into an apocalypse setting were death is going to be common and so becomes everyone else’s motivation, (to not die the same way as Sarah) death as character motivation losses some of it’s meaning. Protecting Ellie because of daughter death issues is fine but willingly killing the population of a small village because of it can weigh heavy on the crux of the plot. Although the plot creaks, I think (in the end) the plot holds up. Especially with the games ending. It’s also because they bolster it with monsters, cannibals and a ‘she is the saviour of all’ plot brace. Kind of over did it it that regard. The world isn’t just bad. It’s activity trying to kill you all the time in every way possible just because the plot demands it. Less deus ex machina and more deus ex fuck you.

Other games, like “Assassin’s Creed II”, also use family death to develop the lead character. Eizo sees his family killed by those darn Templars and it pushes him to become an assassin. The problem is that it is a plot device in a sandbox game, were sometimes it’s his sole character trait and at other times he’s just trying to get his leg over. It becomes a maximum level of disinterested in the Eizo sequels “Brotherhood” and “Revelations” were they just wanted to flesh out Desmond and sort his character arc so the whole dead family thing falls by the wayside. The less linear the game, the less serious the plot has to become. If your in full GTA mode and have a wide and expansive world to explore with enough armaments to shame the local militia, the player is going to spend most of the time faffing about rather than doing the plot because jumping from the top of the Palace of Westminster on to some hapless guard screaming “stick this down your stove-pipe!” is going to more fun then an actual mission.

“Assassin’s Creed” is not the worst offender of miss-using a dead family. For that we look towards the 1-on-1 fighter, the most lax of all stories in any game genre. The only point of a story it to string fights together which can be done just by going;

“Do you sir? I have half a mind to clot you up side ya head!”

Using the “Tekken” series as an example, just using the Kazama/Mishima story line;

So in the space of 4 games, everyone has died at least once with all but Jun coming back from certain death because Jin needs motivation to hate his family some how. Considering Tekken is now in its seventh game, deaths in the family happen again. The selling point in the trailer for #5 was that Heihachi was dead via being blown up in the intro cinematic. (Spoiler: he’s not really dead.) Game sequels are like adding more episodes in a TV series. The easiest way to make them is to just arbitrarily bring back the starting status quo. This just makes death meaningless. The Tekken sequels, and the Assassin’s Creed II sequels, suffer from the same problem. Death as a story point is pointless because you end up doing the same thing, with the same characters, in the same world over and over. There is no narrative progression. Even “Assassin’s Creed III”, which had a different lead and a new world, suffered from having death being pointless because the game was just Assassin’s Creed II but during the American Revolution, which it revelled in way to much making chunks of the story just plain uninteresting on top of the pointless daddy must die arc because the only reason to do so is because the story says he’s evil and leaves it at that. To add more, “Black Flag” poops on #3’s story even more having evil dad’s father be a nice guy because he’s an honourable pirate like the ones because the plot demands it in “The Pirates of the Caribbean”. The only reason why evil dad is evil is because his dad accidentally get inducted as a Templar while trying to kill them. It retrospectively makes the heart of #3 totally pointless. Evil dad isn’t evil. He’s just nuts. Everyone around him is evil and does evil things while he just stands in the middle doing the evil boogie just ‘cos. 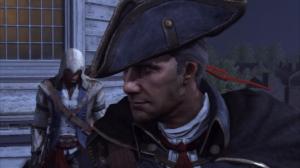 So what can we sum up from all of this. A dying family can make a game. It’s worked for Batman so why not everyone else? The problem comes from it being cheep and a cop-out story wise. If your story is linear, serious and no one else is meant to die then your family can die in a fiery explosion of nuclear death. If not, then please don’t. It will just come back to haunt you. A dead family can set up worlds but it’s not a great conversational piece. Especially in shooters.

“Vengeance will be mine against those people because my family was killed by them!”

“Sorry. I was to busy killing other peoples family members and giving them reason for vengeance against us. What were you saying?”