Developer: Do my Best

Available for PC and Linux. (Reviewed for PC with ‘Press Code’)

I went into the game not knowing what to expect. There was shooting, train passenger management, and exploration and wasn’t sure how it would all tie together. Not only did it all fit together but it was an interesting and at times emotional story as well.

The game basically has two different game modes that are interwoven together. The main gameplay style is a side-on shooting adventure affair which is were you start as the tutorial and introduction to the story. The introduction ends with you dying confused, alone, in a pit, in the dark. Knowing the whole story now I can say ‘start as it means to go on’ I guess.

In this style, not much to nothing is said with all of the plot developments being shown either through the background or through meeting other people. The adventure mechanics and controls are pretty standard with jumping, shooting and looting. 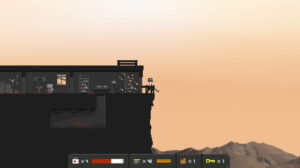 You play as a train driver. As the driver of the refurbished BELUS-07 engine your job is to drive the train to it’s destination. Wherever that ends up being. While there may seem like there’s multiple paths, the game runs linearly. Going from set point to set point. The only time the driver speaks is through the trains chat messenger, to other drivers, in the cab were some plot point are hinted at. Though it’s in-world text and for spoken conversations the driver just goes “…” so actually says nothing. This is when the second game style comes in.

The second style by comparison is just as hectic but in a more considered way. While the first has you exploring and finding ways around attacking enemies, the second has you managing supplies and maintaining the train to keep passengers alive. Together, the two game styles work well. While one relies more on reactions they both take an element of pre-planning and are directly connected through the games crafting system.

There’s only three items you can craft. Handgun and shotgun rounds and med-kits. The bullets are used in the station adventuring sections but the med-kits are used in both your exploring and on the train. The bullets and kits use different crafting supplies so you won’t have to decide whether you want more bullets or more health, although you will have to decide on making either pistol or shotgun rounds, but you do have to decide whether to use the med-kit on yourself to get through the platform or save it for a passenger. Considering a full train includes at least one bleeding passenger who requires constant medical care or they die, it can end up being a tough choice. To add to that, the passengers need food and that can only be found or bought at the stations, making you explore more and decide when they should go hungry. I managed to get through the whole game and not lose a single passenger so it is possible, if you know when to starve passengers and when to keep them happy.

By now you may of noticed that I haven’t said much about the story. That’s because the game is a bit reliant on the story. And how much story you get depends how much you explore and how much of the train conversations you read. 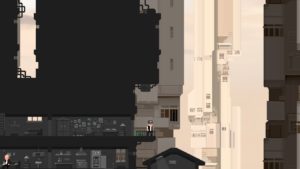 The back story to the game is there was an alien invasion generations ago, called ‘The First Visitation’, that killed many and locked down parts of the planet. The war against the aliens was won after a team, including a pair of brothers, venture into no-mans-land and finds a way to kill the aliens and end the invasion. One of the brothers becomes the de-facto ruler after but his detractors say all is not as it seems.

As the game goes on, it becomes clear that the aliens are back. I’ll leave it there and say you should experience it for yourself but it’s ‘more if you explore’ style of storytelling can be a weakness. I loved the way it presented the story but others may just not be able to keep up if they miss a bit of information while adventuring.

Something else the games story does is just not tell you parts of it. I loved the ambiguity but, again, some may just get lost. There are two points in story, the mid-point history/mystery section and chunk just before the end, were the game purposely keeps its mouth shut and explains very little but if you did some exploring in the levels before you can work out an inkling in what is going on and what everything means.

The ending is by far the strongest part of the game, in both story telling and gameplay. Partly due to the games strength of telling most of the story literally in the background. The story is one that happens around the player instead of to them, leaving the driver as much more of a reactionary character. It works well with the games more considered and reactionary game mechanics. The only time the story happens to the driver is the ending and it’s powerful change as all power gets taken away from not just the driver but the player.

It’s a pretty short game and with it’s reliance on story, I don’t know how many would go through it twice. If anything, the game most needs a sequel. The developers say they plan on doing DLC but as a single package it’s fine. I’d say do a sequel over DLC though. The amount of the story that’s left open and with the way it ended leaves with ripe material more for one then the other.

Even with the relaxed approach to storytelling and the briefness of the experience, I can’t recommend this game enough. It chose a story to tell and told enough to get you through and left you wanting more. For good or for ill.