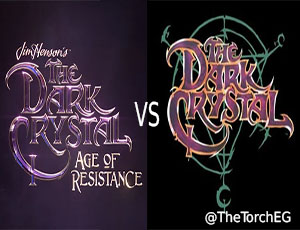 The Dark Crystal: The Age of Resistance just hit Netflix and I binge-watched it all. Then I re-watched the original film, just to see if I could spot the differences.

After watching both, I can say that they are both masterpieces. However, there are certain things the film did better, from a cinematography standpoint, such as cutting away from the close-ups of characters faces during long dialogues to keep from the typical “unfeeling muppet face syndrome”, or giving each character their own distinct look, so it was easy to tell them apart.

Other than that, there isn’t much I can comment on, other than some glaring continuity errors between the two. Errors so massive, the series feels like it takes place in a completely different universe, or at least a different timeline, to that of the film. It was supposed to be a prequel, explaining what happened before the events of the film, but with these continuity errors, it feels like they just wanted to make a series set in the Dark Crystal universe before the apocalypse.

I do want to say that I did enjoy both the film and the series a lot. The series is great, in its own right. It’s beautifully done and expertly executed. It gets a 10/10 from me, as a standalone series, if taken as separate from the film. However…

Preface: Most of these items are explained quite well at the beginning of both the film and the series, so I don’t feel they are massive spoilers, however, some are. I’ll leave those to last and give you a fair warning before they come up. Let’s begin!

The first one is a rather small one, pun very intended. The Podlings are Thra’s second most sentient species, after the Gelflings. They are short, merry and take every opportunity they can to party. In the series, they are about half the size of a Gelfling, who is already half the size of a Skeksis. In the film, they are only slightly shorter than a Gelfling.

The show doesn’t go into much detail of what Aughra needs the planetarium for, but they do go into great detail about how it was built, and by who. In the very first episode, they explain it was built by the Skeksis (not even the Urskeks) to keep her busy and her eye on the sky, so that she’d give them the job of protecting the Crystal. It is also explained that Aughra gets her prophetic visions directly from Thra itself.

The film takes a completely different direction. She tells Jen, our protagonist, that she built the planetarium herself, so she could see how the stars move in ways nobody is able to see, and that is how she makes her predictions. In fact…

That is odd, considering in the series, the very first thing we learn is that Aughra was there to greet the Urskeks when they arrived, and she watched the species split into two and form the Skeksis and Mystics. Her presence among the Skeksis in the series has always been met with familiarity as well, and when she visited them for the first time in the show, they greeted her first and treated her with reverence.

Now we move into spoiler territory. If you don’t want spoilers for the film or the series, stop reading here.

In the show, at the very end, we see Skeksis Scientist create the first Garthian by merging his now-dead servant and the corpse of a Spitter, to give it an arachnid bottom half and a bulky head. He adorns it in the armour he wasn’t allowed to use, to give it the familiar domed back and claws.

In the film, the Garthians have tentacles instead of legs, and far more than 8 of them. They also lack any form of biological components, as evident when any of them die and they just fall apart like a set of armour with nobody inside.

In the series, the process of draining the essence is a gruesome one, but mercifully short, and leaves very little for the cleaning crew. The Crystal descends into the Science Hall, two spikes go into the subject, a flash of lightning and then the subject disappears into a dustcloud and a single drop of essence is deposited into a jar.

In the film, the process is quite different. The Crystal never moves, it can’t move. It is stated that the Crystal has been suspended above the pit. Instead, there is a reflector in the Science Hall, accessible if a hatch is opened. The spikes are gone, and so is the lightning. Instead, a beam of light shines into the eyes of the subject, who immediately starts emitting the same light from their wrists into a receptacle, gathering vast amounts of liquid. The subject survives this process, but the soul, the “essence” is gone, turning them into mindless slaves.

This change baffled me. The series had a much wider use of slaves, so why did they feel the need to change this process? It would have made a lot more sense for them to keep it as it was. And the moving of the Crystal with those mechanical hands and chains makes no sense either. If those are needed to drag it down, what keeps it up when it is suspended above the pit? This change just opened up for more questions and went completely against the original source material.

If a show about 7 kingdoms fighting among themselves for a throne, while a dark threat looms over them all didn’t feel too much like Game of Thrones already, characters also die left and right in the show. Some of these characters probably shouldn’t though, since they are also in the film.

I could think of three characters, but there may be more: the two Skeksis General and Tresurer, both killed in the last episode, and the Mystic Urzah.

Who Cracked The Crystal?

One of the big reasons the show didn’t feel like a prequel to the film was the explanation given for the cracked crystal. In the show, when Aughra visits the Skeksis, she is surprised that the Crystal is cracked. This means the cracking happened sometime in the 250 or so years she was travelling the stars since her last visit. This is confirmed by Heretic, who claimed to have chipped off a piece of the Crystal to create the Dual Glaive.

But in the film, the Urskeks said it was them who cracked the Crystal, in ignorance, and that it was this that caused the divide. It was their whole reason for leaving Thra and passing on the job of guarding the Crystal.

If the show can’t even get a basic piece of information like this right, then it cannot possibly take place in the same timeline. It cannot possibly be the same Thra, with the same Skeksis and the same Mystics and the same Aughra as those in the film. The world looks and acts the same, but the events presented are completely different. It feels like at some point, any of the crew that worked on the original film should have stood up and told Jeffrey and Will “Hang on a minute, this doesn’t sound right”.