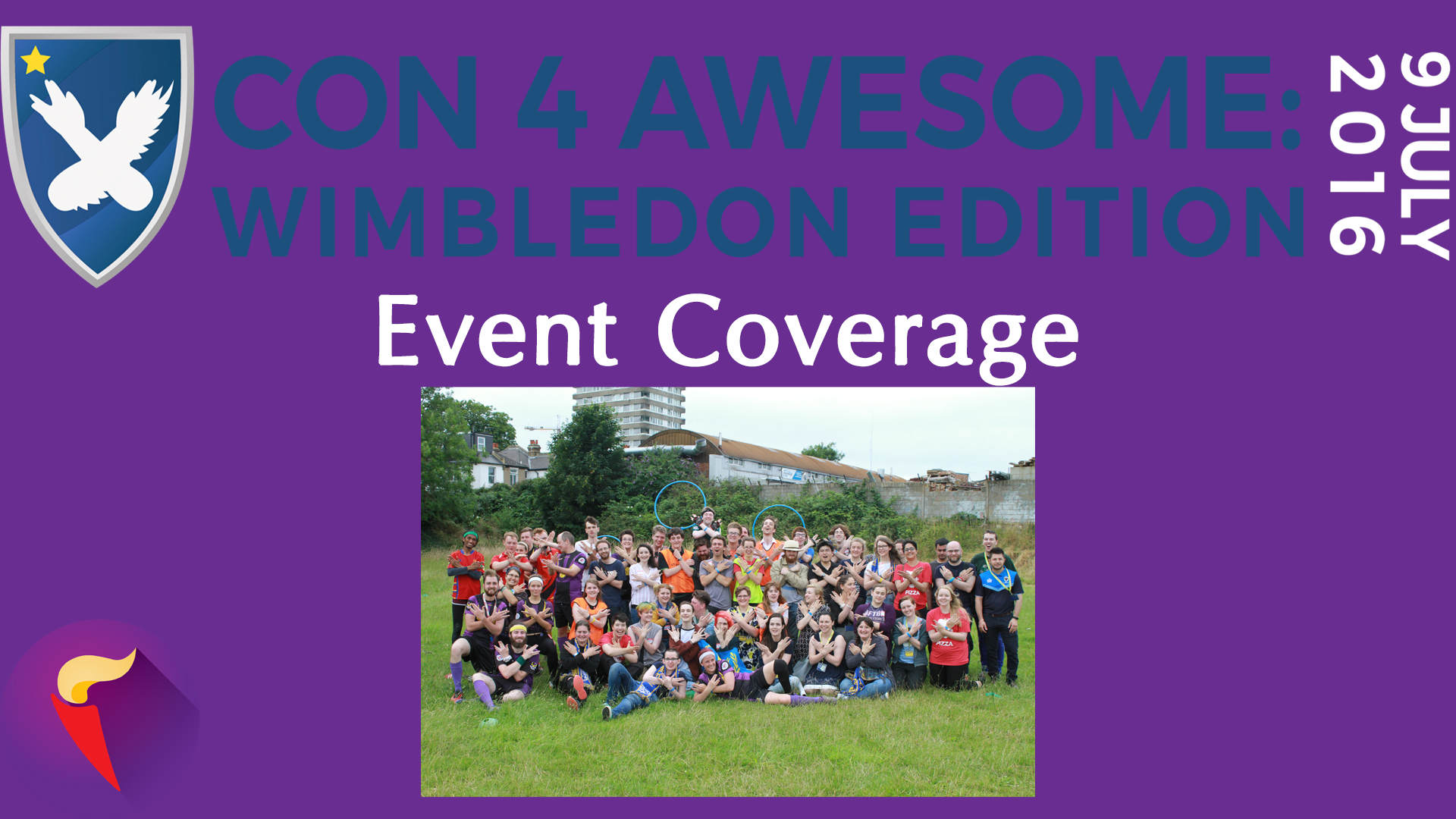 I’ve never really considered myself as ‘in’ the Nerdfighter community. I’ve been ‘part’ of it for a long while now but never ‘in’ it if you see what I mean. If you’ve followed the Torch YouTube page, you’ll know that I’ve streamed and made videos on the Nerdfighter Minecraft server Nerdcrafteria and been on the associated Darling Fetch the Battle Axe podcast (talking about video games obviously). This was the first time I’ve been to a gathering of Nerdfighters in person and so it was an interesting night. But first, a quick explanation on what the event was about.

The Con4Awesome was the first UK/Europe Nerdfighter gathering dedicated to fundraising for the Foundation to Decrease Worldsuck, a charity set up by Hank and John Green (AKA The Vlogbrothers) which raises money for various charities all over the world. It’s largely helped and run by their fan community, the previously mentioned Nerdfighters. It was held at the current A.F.C. Wimbledon football stadium in Kingston, South London, (just an eastward stones throw from Wimbledon Central). The Nerdfighter connection to the club comes from a unique deal made by John Green who’s YouTube money generated on his FIFA gameplay video series of the A.F.C. team goes to the club. He even has the north stands named after him. So it made a lot of sense having the event there. From a cynics point of view, it acts as a good PR event for the club who wouldn’t mind the added press. From a not-cynic, it’s the club helping out a community that has helped them a lot over the last few years and who will most likely keep going on to help them even more over the years coming. Even when I briefly talked to Ivor Heller, the co-founder and commercial director of AFC-Wimbledon, he said he was filled with much love for the Nerdfighter community saying that Nerdfighters were a unique addition to the club. Through them, the club has been introduced to a new generation of fans that support them. As the day want on, he even made a few cracks about starting to vlog himself so maybe their YouTube connection could go deeper. A.F.C. does already have a YouTube channel… 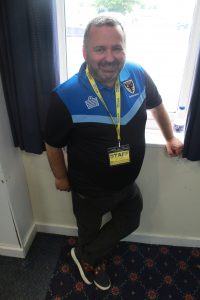 The event proper opened with a speech by the event MC Sophie (AKA AnAbundanceOfSophie on YouTube) followed by a brief video by Hank Green himself welcoming everyone. It was a nice touch that Hank offered some words of thanks and acknowledgement to the event, making everyone fell welcome and connected. Then followed a Vice Sports video that went along way in explaining the unique deal that John Green has with the club. It also wasn’t shy in showing that the team and the club management had never even heard of John before the deal was thought up. (Why would’ve they from a football perspective?) It also lead into a talk by Heller on the club history. I’m not deep into the realms of football but the story of the club is a history of punching up and fighting for their place. A quick bullet-point history would be; there was Wimbledon F.C., foreign buyers bought in and wanted to move the team to Milton Keynes, fans and some management said no, they divided into the MK Dons team and a new team which became A.F.C. Since then, A.F.C. have been moving up the football rankings and are now a high tear team rivalling those in the big leagues. But unlike the big league teams, A.F.C. is majority owned by a fan association which, like I said cynically earlier, can mean money is an issue. But it means that the club is a team by the fans for the fans, which is sadly unique in major league sports. Even as someone on the outside of sports, this is a team I can (and do) support just on their principles of being a team for fans.

After a quick break, the main attractions started with a panel of YouTubers consisting of Lex Croucher, Sanne Vliegenthart and Hannah Witton. It was a brief panel as they mostly talked on their connection to the Nerdfighter community and being a YouTuber generally. Although there were a few moments that got instantly memorable, like when the topic of internet comments came up with a named comment being about butts and the sucking of farts thereof (seriously) which brought a mixture of bemusement and hilarity.

Then came a trip outside (well a to the field next door) for a demo from the London Unspeakables, a Quidditch team. For those not in their 20’s, Quidditch is a fictional contact sport played on flying broomsticks from the Harry Potter franchise. You have now of course seen the largest stumbling block for playing it in real life, flying broomsticks don’t exist. At least until monorovers combine with segweys and get high powered. For now, it’s played very much on earth with sticks held between the legs in place of the brooms. That may sound weird but that’s the only out of place thing I could see around it. Otherwise (while not having a total grasp of the rules) it just seems like a mixture of netball/handball, dodgeball and touch American football/rugby. It was actually quite interesting seeing it be played in person as it looks quite fun and more energetic then I first anticipated. The combination of the three game styles makes it pretty complex and means that you have to have stamina and upper body strength to play well. 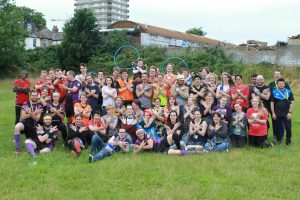 After a few public games with the attendees, we were called inside for the 2 course meal and a quiz. The meals were delicious. Well made and well presented. In between courses there was the pub-style quiz on topics that all Nerdfighters would know about. So of course I was terrible at them. Although I can claim some skill in the ‘Name That Meme’ section by coming up with a better ‘Hello. This is Dog’ meme, that being ‘Hello. Was it me you were barking for?’.

Then followed the party with music by singer and songwriter Freja, chip-tune maker 8-BrickDMG, and the 4 piece I Talk to Strangers. Freja is a melodic singer based out of London who is also known for her work on the soundtrack for the game Worlds Adrift by Bossa Studios (which is a very good game by the way). She has a very impressive voice and when combined with her piano work makes for some very emotional music. 8-BrickDMG by contrast is powerful in a digital way, making his music by the power of original Game Boys. In some of the songs you can feel the electro style and influence. In the others you can feel the influence of the old chip-tunes of the old games. The technical skill it takes not just to compose the songs but play them is an impressive feat to see. Then there is I Talk To Strangers who, split between the four of them, can play a big variety of musical styles. They can play melodic in the style of indie style that contains Kaiser Chiefs and the like, and then sliding to Evanescence style melancholic melodics that dips deep into rock and then finish off with a round of “Ain’t No Rest For The Wicked” going full country. It was a good way to to tie up the whole event. After that I quietly departed, which brings me back to the opening paragraph. 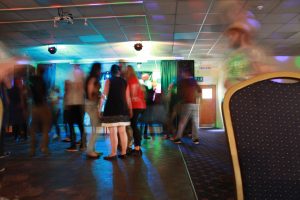 I went in thinking myself as ‘part off’ but not ‘in’ the Nerdfighter community and I still do. Although after all this I’m probably much more of an known entity then I ever was before. Maybe at some point in the future I’ll think myself as ‘in’ but this wasn’t the time. But the community that was at the event is one that was so welcoming and open even to a relative outsider like myself wearing a press lanyard and waving around a camera. And that’s something that I have to applaud. The people there were nice and the staff for the event were extremely helpful before and during the event. This is a community that that I don’t think I’m ‘in’, but it is a group of people that I’m very glad and proud to be a part of.

The Con 4 Awesome raised (preliminary numbers) £525.81 in donations for The Foundation to Decrease Worldsuck (not including ticket raising) and 79 books and 2 bags of clothes in individual donation drives.