To begin, let me indulge in telling you a little story. When I first got the game to review, as always, I try it out on the video editing PC. It has little graphical power but I can be on it all day and all night with ease meaning I can look and analyse every frame if I want. (It’s low but I’m in the process of PC updating to give a little peak behind the curtain.) It worked but, as expected, I had to put the game to the lower settings to get it to work cleanly. Seeing the game had been nominated for graphical awards that didn’t seem that fair so I booked in time for the powerful PC that I can play on high settings but it’s used for other things so it favours a quick turn over. I’ve done that before to review online games (like the Evolve Alpha) and games that don’t work on the older machines well enough (like Battlefleet Gothic). Like I said, updating to a newer PC but reviews wait for no man so have work-arounds until then.

It worked fine, for one level and then for some reason it broke with consistent stuttering and lag. It soon became clear that it was the Nvidia graphics card causing some slowdown. Changed settings, no change. Updated drivers, no change. Rolled back drivers, no change. Changed driver settings, it got worse (for some reason). After three days with no solution and no change in sight, I played it on the older machine on lower settings. I don’t hold the issue against the game (it seems like Nvidia has been causing stuff like this for a while) but the whole escapade led me down a rabbit hole to my biggest criticism of the game. 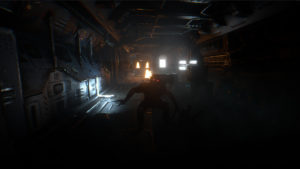 It’s a game that takes a lot of pride in its visual design. And it looks great. The ship is very industrial, in the same sense as Dead Space, and the visual after effects give a grunge, Alien feel that really adds an effect of you coming to the ship long after everything went down. It immerses you. The sound design is much the same with an emphasis on ambient sound over music making the ship feel hollow and you isolated and alone. First loading up the game in all it’s shiny glory on high settings had the environment feel oppressive. Even on low settings, the ship felt hostile and creepy. I found myself creeping around every corner waiting for a monster to jump out. It was great. Then the first quest string started and it was all downhill from there,

The main part of the quests to complete are fetch and backtrack quests. That’s fine and good, until you start doing a fetch quest for a fetch quest. The first quest starts after getting to the engine bay and finding it’s locked. Unlock the way to the engine bay and restart the engine. A logical enough start. Key card is in the med-bay, head there now. You get to that section of the ship and there been a roof collapse so you have to go the med-bay through the chem-labs. To do that you need to go through the vents but they’re locked and you need a wrench from storage one deck down. So now we’re at the point were we need to get a wrench, to get a key card, to get to the engine bay to restart the engine. It wouldn’t be that bad until you realise you opened the venting system in the engine bay by hand to get to the engine bay but now your told you need a wrench. And this ends up being one of the few times you actually use the wrench to open vents in the whole game.

That ends up being the core issue with the game as a whole. The logic of the game world is just dim. The monsters you fight spawn at flag points, when you enter a room with a certain objective or pick up an certain object, so the logic of were they will appear is random. It also means that fighting is pointless. On top of that, there are enemies like the Abomination that are one-hit-kills so some encounters force fighting or stealth. You never chose which. That combined with the repetitive back and forth of the fetch quests means the world is at the whim of the developer, not as a cohesive world logic. That can be said of the map design as well. They make a references to how dumb it is like when they mention in text logs how dumb it would be to have the brig in the med-bay. You can hang a lantern on it for as long as you want, it still doesn’t excuse it from being a dumb design choice for the game. It just makes it seem like the map was designed for the backtracking and not for a cohesive world. 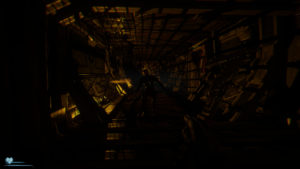 Then theirs not much to say in regards to the story. It’s normal horror fare with two voices on the intercoms and one turns out to be evil and the crew ends up being turned to monsters which they don’t really resemble most of the time which you have to fight. If you’ve played horror games before then you will know were the game is going pretty quickly. Even the big twists at the end of the game end up being predictable. So all in all, the story doesn’t do anything to help the game. It just makes the backtracking shine all the brighter, meaning the game just end up feeling mostly boring.

It’s actually quite sad because the graphics and ambiance of the game is incredible but the rest of the game is just stone average or not very good. It’s the reason why I regaled you with the story of the graphics card at the beginning. The start of the game is very good but as soon as you wipe away that veneer it all falls apart. The skin of the game is is handsome but take a few steps back and you’ll see it’s just skin on bare bones horror. It is serviceable for those who want a horror fix and you can do a lot worse but if your looking for a clever and more intense horror game, you’ll have to look else where. An average horror game with a big set up and an ambiance that’s bar few, but it lacks cohesion everywhere else.