Considering I was sailing the ships of the Imperium as an Admiral at the start of the year, it’s interesting to be rummaging around wrecks at the end of it. 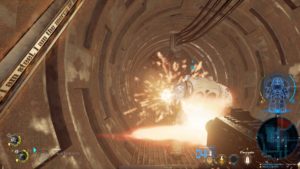 ‘Space Hulk’ is another part of Game Workshop’s “Warhammer 40K” franchise. But instead of a field battle system that most of the figurines fall under, Space Hulk is a board/tile game. As the lore goes, Space Hulks are a cluster of crashed and conjoined ships that have merged together to make what equates to a moon sized shipwreck. The board game is a 2 player game were one takes the side of a squad of Space Marine Terminators (the formidable mechanized infinity of the humans) and the other takes the side of the Tyranid Genestealers (an nomadic alien breed that’s a cross between the aliens from “Independence Day” and the Xenomorphs from “Aliens”). Like a lot of 70’s/80’s UK sci-fi there’s a lot an arty and complex sounding names like Apothecary, Imperium, and Adeptus Mechanicus that may seem complicated for a new person to the lore but you can just go through a lore book and do ‘find and replace’ and it makes sense. It’s the fancy words for normal things kind of general lore so I’ll do my best here for the novices.

Deathwing has you as a part of a Terminator squad going through a Space Hulk that appeared from the Warp (hyperspace). If you play in the single player, you play as a Librarian (a psychic unit of the Imperium) joined by a Heavy and an Apothecary (medic class) AI. At times, the AI can be amazingly dim. At others, with the right moving, they can be over powered as hell. For one level, I had to kill a set amount of Genestealers to clear the level. My heavy had his Thunder Hammer and shield so when he was put into defence mode he charges to melee range. I locked down the whole room so they only had one way in, he charged to where they spawn from when I put him into defence mode and I just sat back at relaxed. He just did the Darth Maul thing and swung at the hole and no one could make it out. Although, in the next level he got stuck behind a ladder and a computer terminal. Like I said, overpowered but thick as bricks. 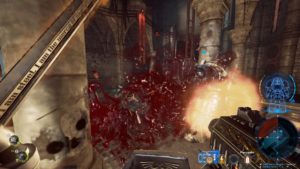 If your playing in the 4 player co-op, you get to chose from those three as well as the support, which is melee focused but has a riot shield (my personal co-op favourite) and the reinforcement, a more general fire support class.

The story itself is the normal kind of 40K story. An artefact of great importance that was lost to history during the “Horus Heresy” (one of the backbone parts of the 40K lore) is found and the marines have to find it and secure it. In this case, it’s an artefact that was lost when a ship of the Blood Angles Chapter was lost in the warp but then comes out buried deep in the Space Hulk.

It’s pretty much the same base story as the tile game but with more detail, like connecting it to the greater lore and character names to help define the game story within it. As an adaption, it is extremely good. It’s steeped in lore and the gameplay mechanics work in the same way as the tile game, with radar blips, Genestealer tunnels and entrances and the open, maze-like structure to levels.

Going through the levels you travel from ship to ship within the hulk with each ship being from different chapters of the Imperium. The design overall is great, having good internal logic with the ships design and having a varied look between the classes of ships and designs between chapters. It carries on the 40K mix of industrial/metal sci-fi and medieval fantasy with the changes/merging points from one to the other, even during levels, not being jarring or overly obvious. It means that each level is a cohesive whole with its design and logic. There was never a point were something seemed overly out of place. 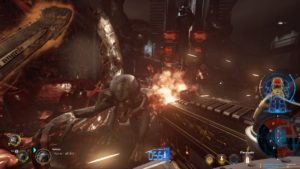 The same can be said about the Terminators and the Genestealers. The Genestealers are a horde of ravenous creatures and the look and act just like it. The big comparison would be the Xenomorphs from ‘Alien’, but that would only be the normal forms. The evolved forms look like Cthulhu with their squid faces which felt like they were playing a bit to heavily to the pop culture of the moment.

On the other hand, I have nothing to complain about with the Terminators. Looking at them is a bit odd but they’re 12 foot, armour plated space marines. When eye to eye they going to look cumbersome and a bit weird. But when your playing as one, you feel the weight of the bulk and the power of each shot. When you playing, alone or with others in the online co-op, you feel like a giant death machine carving your way through the enemy.

But, even with all that said, the game has one big issue. Currently, the multiplayer mode is bugged to buggery. Contestant connection problems, gameplay glitches (the most irksome being one were you suddenly lock up so you can’t fire or use you abilities for the remainder of the level even though you can move around and interact with other players) and bug out crashes. It may not sound like much, considering the single player is great and had little to no issues with it, it builds itself as a 4 player co-op shooter and the co-op part of it is currently broken to hell. When I can play it, it’s amazing, in ways its much better then the single player. But I could spend an hour connecting and dropping out of lobbies because the connections are so bad. But even when I get play and I’m having a great time it would still bug out so there was no guarantee I could even finish the level I started. 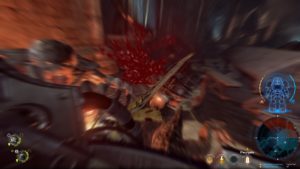 That ends up putting the game into an awkward position. The game, as it’s working parts of visuals, design and play style is great. But what it set out to do, to be a 4 player cooperative experience, is currently terrible and very buggy. The reason why I say ‘currently’ is because this can be fixed post release in patches. They can make the multiplayer more stable, they can make the multiplayer less buggy. But until then the game would of only succeeded in half of what it aimed to do.

I have to damn it with fine praise and say that the gameplay is great and immersive. But with it’s core experience of being a 4 player game this bad, it may be wise to hold on to your money for now and see how, or if, its patched in the future and then ask the ‘recommendation’ question again. Maybe it will be better but for now, it’s a no.