“Sky Saga: Infinite Isles” (‘Sky Saga’ for short) may only be in its Alpha stages but it is one of the few recent games that has tinned that almost child-like wonder and sense of adventure that not many games have catered for as of late. The last one that did was “Starbound”, a game after my own heart with it simple design and sci-fi adventuring. Before that it was the amorphous mass that is “Minecraft”, a game that I still obsessively play on most days even after so much time. It’s kind of apt considering Sky Saga is like a mix of Minecraft and Starbound and tints of RPG’s like Skyrim. 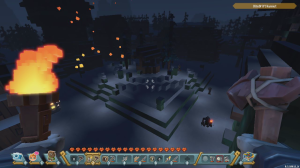 The game sees you as a personalised hero who crash lands on an isle floating in the sky ala things like “Storm Hawks” if you remember that show. You soon craft a stone beating stick (like a stone axe but more pointy with the way it looks) and you make your way to your crashed craft which conveniently has some castle ruins next to. You need an iron plate to fix you craft. Luckily, in the lower level of the castle is a small amount of iron ore (o you can fix your craft and to help you along the crafting tech tree. You also find some Keystone fragments embedded in the opposite wall and an inactive Keystone portal. This is were the “Starbound” comparison lays. Your little isle is your and yours alone. They are free from the tinkering fingers of others (unless you call them friends and make your isle open to them) and no monsters will suddenly appear and bite you in the arse. Just like your “Starbound” starship. Your home castle doesn’t have to be a castle either. While your starship has to stay mostly as it was when you got it because of space, in Sky Saga you can can build anything on your little plot of heaven as long as you have the resources. This is were the keystones and the portal come in. Just like your starships teleporter, you can venture off to randomly generated worlds to get resources and kill monsters. The keystone isles are usually quite small, making them easy to traverse, and are usually packed with plenty of resources. What resources will be there is always random. In one isle I found a veritable, and literal, gold mine while in another I found a stack of white keystone pieces. But also in others I’ve find nothing. The search for stuff is also compounded by the people that come to your isle with you. If your on your own, as I always am, up to 4 random people will come with you if your first there or you could be one of the 4 arriving behind someone else. While I can’t say for sure, I guess the multiple people who are adventuring with you would be your friends if you were with them. When your alone, your pretty much competing with everyone else to who can get the resources first. Although, I’ve seen that most people only look and take the keystones while leaving all the iron and other ores alone. It surprising considering you can blitz through iron crafting. Better to have a small stockpile then suddenly run out.

When your on the isle itself, the “Minecraft” comparison comes in. You use your axe to chop down trees, get rock and mine ore. You could build a little shack but there really is no need because you won’t be coming back due to the random generation of the isles. I spent some time on the first isle I went on, building little dirt and stone home but there want much point. To get home you need to find the portal home. It’s usually in a cave guarded by wolves or, if your really unlucky, in a castle dungeon were you have to fight your way through knights and captains. To go home you go through the portal and portal home. Only with what you have one you in your rucksack. Most of the time it better to stock up on base resources and just craft when your home. Most of the time now, the only thing I craft when I’m adventuring is forge so I can melt down iron bars and plates I find. When I say find, I mean I get from smashing up most of were the portal is which always has iron grating sections of floor covering iron braziers. Partly why I have a small iron stockpile.

The Skyrim comparison is slightly more obtuse. You can weld items in both hands. You can also make sets in your 1 – 8 hotbar. It means that your can switch from your axe and a torch for when your in caves, to a torch and your sword to fight whatever is in the cave, to a sword and shield combo when you don’t have worry about light so you can have a block. That’s the entire comparison. I could of just as easily said ‘Chivalry’ but the fighting mechanics are more run away it’s hitting me then beat it with stick than proper combat tactics. Least it means that how much dangerous an enemy is comes down to how big and how armed it is. A wolf, not so dangerous. Block two hits, basic combo, repeat. I bear is bigger so a bit more dangerous. A bandit, well their armed now so try not to be stabbed. A captain, well he’s a foot taller then you, two feet wider then you and has two swords that are the size of you. A dangerous sod. Although I just use my bow most of the time. Distance is a better ally then a bigger sword most of the time. I even killed a hammer welding boss with just a bow because I got the big guy stuck behind some stairs leading to the home portal. It was probability a glitch rather then a genus tactic. Well it is an alpha.

On its alpha state, there are a few niggles. As just said, the AI sometimes a bit slow. Although, that might be because I use nothing but the bow most of the time and I am a crack shot (mostly) so it might less be AI and more balancing. The biggest bug I’ve had is the most infrequent and that is random crashing. When I first started playing it was quite rampant but it seems to have died down. If it is just a thing that happens to new people because of something with the servers my fear is that it might put people off. The crashes were so random that one crash report read just “It was turning day, was walking, it crashed.” Sort out the crashing first before the balancing. I like being arrow king anyway so that can just be a perk of being a ranger.

Calling this game a “Minecraft” clone does the game a disservice. For starters it something very different. “Minecraft” is about creativity. Sky Sage is about the adventure. While only in its alpha, stages it is a greatly made, well put together, well thought out experience what’s only lack is polish. A few things can get cleaned up here and there but the only thing I’d want is just more. Partly why I’ve barely stopped playing it and won’t stop for a while.