(Reviewed on PC with press code)

The two great things the game does feel completely disconnected. Saying that as the proviso from the off set because the rest of the review is going to say that I think the game is great and you should get it. Which you should. They’re great, but just feel disconnected besides for the small plot connection. That’s the overarching written story and the puzzles.

As of writing this review, I’ve just finished the game. The credits are rolling as this is written. I spent near half a day on the last puzzle, closing the game and going back to it several times. I knew it was the last level (as it was the rounded 40) so as I started writing this introduction I thought I would have to admit not to finishing it. But going back to the game I thought “I’m over complicating this” and finished it in 2 minutes as soon as I got to it. That is the sign of great puzzles. The deceiving un-complexity of simple puzzle mechanics with fogged solutions behind complex set-ups. 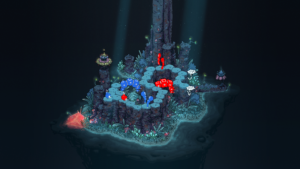 The puzzles are based in colour. You have a set of ‘gammies’, in the story they’re described as artificially made fungi, that have to get to a pad were they can fly away. The gammies base colour is white (very Photoshop thinking with white being the absence of colour) but they can become the primary colours (red, blue and yellow) though a changer. Then they can mix together to make the secondary colours. The puzzle element is there are coloured barricades. The main one is a coloured bridge were only that colour can cross. The next is coloured tendril arches that stop that colour from passing. The final is a colourless switch bridge were you have to have a switch weighted down for it to open. These get more complex as the colour mixes come in as one gammie can act as a carrier for other colours or multiple colours can be blocked from a path. It sounds complex but in practice it’s very simple. Hence the “deceiving un-complexity”.

All of the puzzles can be done is a minute or two if you know how to do them. With 40 levels total there is plenty of figuring out to do. The puzzles levels are introduced with a section of a story, with each act acting as a chapter bound together with a theme.

The story is about a little girl and her father. Her father is the one that makes the gammies and ends up taking them for some reason. It’s open to a little interoperation but I took it as an un-named terminal illness. 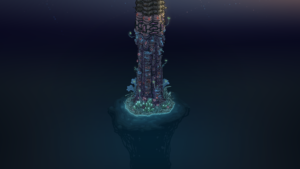 As the story goes on the prognosis becomes grim and death becomes a leading topic. The last three act introductions are as if it’s a story being told in 3rd person, a departure from the ones previous which is in 2nd person. It’s also the point where the girl “who is no longer very little” goes to find her father one last time. The story is great, going on as a mixture of a coming of age story for the girl with an ending of acceptance. It’s well told and knows when to leave things a little vague. The topic of death is a key point but no one dies in the written sections. The death the last acts are centred around happens ‘off-screen’ with the story concentrating on the reaction rather then the death itself. You don’t see a single human face or hear a word but it is packed with emotion through it’s brief sections.

But, as I said at the beginning, the puzzles just felt totally disconnected from the story. The two things singularly are great. But as you end up concentrating on the puzzles and by the end the puzzles have no connection to what’s going on in the story. It ends up being a contrast to the start of the game as the gammies and the story are well connected but by the end it totally disconnected. Perhaps it was meant as a metaphor with the father and daughter. Either way, it’s two good things starting connected but ending separate.

The other aspects of the game are well done but are limited but either the plot or the style of game it is. The graphics are great. The main menu is minimalist with a vertical parallax image that is amazingly well drawn. But you’ll spend most of the time in puzzles so you’ll mostly just see the 8 different background and themes and only those. The music is well done and has an ethereal quality to it. It goes along with the story so is changes between acts to fit the mood, which is does well. But it just ends up as a background hum for the puzzles. 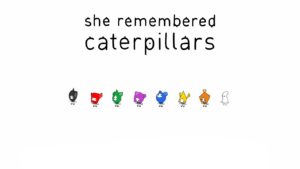 Each aspect of this game is great and each bit can stand up on it’s own individually or combined. Some parts end up falling into the background due to the nature of it being a puzzle game but that doesn’t take away from the experience. The aspects end up disconnected, not disjointed. Like colour, each aspect stands out on their own. Pretty apt as they puzzles are based on colour. But if they sold prints of the artwork in the game, especially that vertical parallax main menu, if would be respected as piece of art.

I got to talk to one of the developers briefly at Gamescom and I could see the passion they had for the game. It was certainly not misplaced. It’s a great game with great visuals, art, music and puzzles. If you like puzzles, snap this up!