Available now for PC, PS4 and Xbox One. (Reviewed on PC with press copy.)

There is a depth to Seasons After Fall that surprised me as the game went on. It’s also not a very big game with the full story coming in at 6-8 hours depending on platforming skill and wondering about. Coming in at just shy of £12 I think its a fair price for what you get because what you get a beautifully designed, well orchestrated albeit a simple at times platformer with a story that has many layers to it. 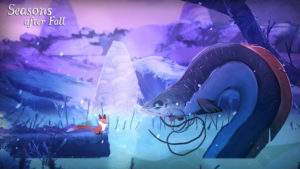 You play as a forest spirit that is told to posses a wild fox, so you can have a physical form to collect fragments of the seasons from the Guardians for the Seasons for the Ritual of the Seasons. What soon transpires is the soothing voice you’ve been following is not an all knowing narrator or mentor but was herself meant to be in the Ritual of Seasons. Telling the story from there would spoil the emotional core of the story so I’ll leave it there for another time. What I will say is that you are nudged into having her as the bad guy when the subterfuge is shown but it is more complex. Which brings me to the depth of the layers of the story.

There is only two voiced characters in the game and your not one of them. The first is the Seed, the female voice that guides you at the start and the Guardian of Winter, a male voice in the body of a brown bear that guides your through the second half of the game. The relationship between them is explained in the games version of collectables, sleeping beds for the fox. There’s only 4 to find so it’s not that hard to find them with a little exploring. But the flashbacks (presented as dreams) adds a layer to their relationship that is very human. If you find all of them you get a bonus after-credit ending that is very sweet and ties off the ark nicely. 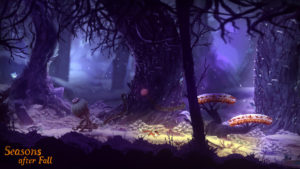 The game reminded me of two things when playing it. “Okami” (from the PS2 era) and the works of Studio Ghibli. Most of that came from the games drawn style and sound design. I got to talk to the art designer while at Gamescom this year and it was interesting to hear that all of the game was hand drawn in Photoshop. The sumi-e like style is were I started making connections to Okami and I have a sneaking suspicion that the game aimed for something like that. A line at the beginning saying that Seed would of preferred a more majestic animal like a wolf instead of a fox feels like a nod. The bonus after-credit ending also feels like a nod having a sequences that feels right out of Okami.

The music is were I get the Studio Ghibli connection. It’s designed by Yann van der Cruyssen with little to no aggressive percussion (drums and the like) and so have a more melodic lean with strings. It creates a feeling of flow (one of the themes around the seasons mechanic) and calm that really goes in the games favour. The music is designed for everything, from simple tones being used as the speech of the guardians and the fox as well as the Ghibli-like background music. All of this get combined in one of the hidden secrets of the game, the Bird Song, were bird-song’s are modulated and combined to make its own short track.

The design and the sound of the game are almost bar none at the moment. It is one of the most beautiful games of the year. I’d put it as one of my favourite in artistic presentation ever. But that doesn’t mean I don’t have a few negative things to say. 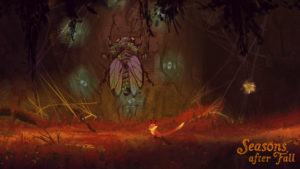 The core mechanic, switching from season to season to solve puzzles, is a little buggy at times. There were a few times when I switched to a season to activate a plant that you bark at to open and it wouldn’t open. I only had to switch away and back to fix it but it was more common that I would of liked.

The only other complaint I have is the last foliage section in the Guardian of Summer area. Fireflies are used as a pattern lock. You set them up in a pattern and they unlock doors. The first time you use them (very early in the game) there’s only three fireflies and only only three patterns you can make, which only two have an effect. It’s not that bad as you are presented with the way to solve the puzzle when given the fireflies. The only other time you use them (at the last section of the Guardian of Summer area) you have to make four patterns with six fireflies but this time, depending on what season your in depends on the type of connection that goes between the fireflies. For the first pattern, you are presented with with the solution but you have to work it out, as you did the first time you used the fireflies. The other three patterns aren’t presented to you at all. You have to go and find the patterns around the map. It’s not even a puzzle when you find the pattern. It’s just there. No reason why it should be. It’s just there. It’s a mutated version of a keycard hunt out of nowhere and it breaks and grinds all flow to a halt. The rest of the game is you being presented with mechanics and using your own intelligence to solve the problem. This is just a ‘door is locked’, ‘go find the key’, ‘unlock door’ puzzle which is just lazy and ends up feeling out of place when in the context of the rest of the game. 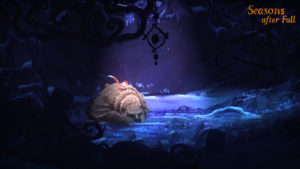 In conclusion, I cannot understate how wonderfully artistic this game is. It has a hand drawn style that makes every frame look like art and a soundtrack that can stand on its own as an album (which you can buy on Cruyssen’s/G4F Record’s BandCamp page). Combined together it makes a great artistic game. But that doesn’t mean it’s without fault, like the last firefly section and and a few minor glitches. Even so, I highly recommend “Seasons after Fall”. It’s a game that can be held high as ‘a game as art’ as well as being a condensed puzzle platformer that doesn’t overstay its welcome and brings enough to the table to be a satisfying.