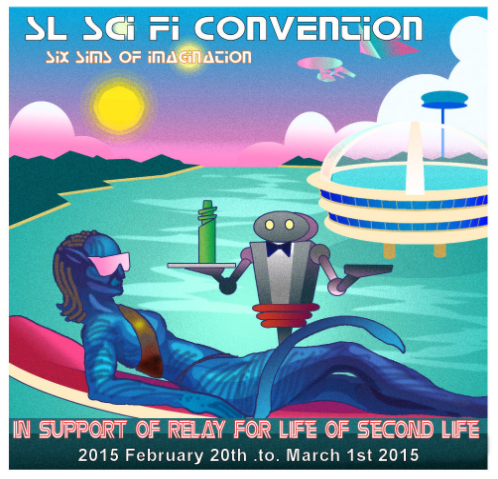 Beginning in 2009, the Second Life Science Fiction Convention is one of many events created by users in support of the American Cancer Society’s Relay for Life.

Starting on February 20th 2015, it will run until March 1st 2015, beginning the 2015 season of Relay for Life in Second Life and will be home to over 100 exhibits over the virtual world’s grid. Users will enjoy 10 days of activities, Live Music Events, Theatrical presentations, parties and much more.

Second Life users who are interested in taking part in the charity event, will be able to register for a plethora of activities on the Sci Fi convention website.

If you are interested in the Sci-Fi convention and are not a part of Second Life. Signing up is as easy as a click of button.

The American Cancer Society is an organization that helps to fund Cancer research. Beginning 100 years ago, their primary goal has never change, and that is to help those battling cancer so they can celebrate more birthdays .

Relay for Life of Second Life is an annual event that takes place in Second Life from March to July. Volunteers form or join teams to fundraise and raise awareness throughout Second Life and the real world. From humble beginning in 2009 they have raised $2.5million towards cancer research and have teams from over 80 countries worldwide.

InWorldz is in trouble and need YOUR help