Yes, you read it right. OnLive has been acquired by Sony. The services related to Second Life at OnLive will end on April 30th, 2015. Till then, all availing it would be provided  an uninterrupted  service. All subscription fees that were paid on or after March 28th, will be returned. Any user can use SLgo for this month free until the respective date, that is, April 30th, 2015.  OnLive provided high quality graphics at $5 approximately monthly subscription fees; which meant that they could provide the service all over the world to a wide customer base. Recently, it also added Firestorm features for the mobile app.

The following reason was presented by OnLive Team about 24 hours back. 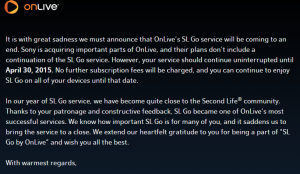 The message can be viewed on their official website. There are many around the world who are affected by this news. So, people have started a petition in Change.org. Change.org is the same place where people’ opinion on Net Neutrality changed the decision. You may view the decision here. If, you would like to post your opinion too, you may do so at Save SLgo, started by Drew Wilhelm of United States. In every 12 hours, about 100 supporters are signing the petition.

I understand, companies need to be merged, absorbed etc. for further expansion. What I fail to understand is, is this expansion just for profit making of a business or an expansion towards growth in services and products. Are the services provided to customers for the betterment of the society or to fill their own coffers?  Or does it want to capture the market? This deal seems to point in the direction of market expansion. To stop the services of Second Life on OnLive, indicates it wants to grab that market, which has dissatisfied its customers. They could have worked around it, instead of washing out the services abruptly with a months notice.

This petition is to voice our opinion. Sign in, and lets tell them what step would have been a right one.