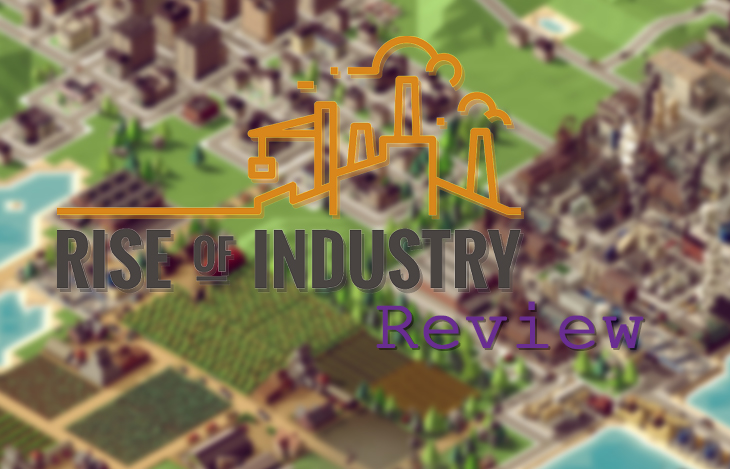 A cartoon ogre once said that he had layers and it made him more complex and better for it. He later went on to become king and make lots of money. In this game you can become a king of industry and make lots of in game money. Other then that, this analogy has nothing to do with “Rise of Industry” or really anything at all. I just couldn’t come up with introduction that involved layers and making money so I just did what the internet always does and go with Shrek. I’ll be more articulate from here on out I promise.

Rise of Industry is, as you would of guessed, a business tycoon game where you aim to be the biggest business that ever businessed. You start off with collecting and wholesaling water and sand, then use the water to grow crops to feed animals and soon enough your part of big-pharma while being in big industry building cars and computers. That’s the reason why the introduction was reaching so hard for the layer analogy as that’s what the whole game is built on. 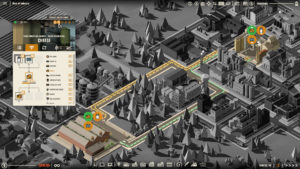 The mechanics and the difficulty slowly layer on top of each other and it ends up being very complex. But it’s layered on gradually enough so you can get to grips with each part before adding another layer. For example, you start farming water at any water body. Desalination isn’t a thing so I guess map edges are just of giant lakes or something. There’s limited fish in them so that might actually be cannon. Anyway, getting back on topic, you use the water to water crops like wheat, then use the wheat to feed cows. From that you get milk, beef and importantly leather that you add to wood frames which has its own production string (logging to planking to frames) to make chairs. Then you can add more parts and make cars which give you more stuff like chemicals to go into pharmaceuticals. Or you can just make toys, textiles or ready meals.

The variance of the production strings mean that no matter where you decide to start, there is always an easy pathway forward. No resources? Go into agriculture and the ready meal pathway. On a coast? Use sand, water, and plantable trees to go into construction. Adding to that is buying and selling to the state, which is also known as shipping out of the map. You can buy and sell anything at base price, so if you need something like copper for piping but have none in our zone you can import it. Or you can sell mass market, like when your warehouses get clogged up with wheat as mine often did. As a tip, wheat grows faster then cows so you really don’t need much regarding farming.

As the production strings become giant cross industry webs your battles with the AI, or more then anything out profiting them, becomes harder as each detail has to be considered. But if that isn’t hard enough for you then you can layer on the difficulty too.

There’s three modes to play; sandbox, career, and scenarios. Sandbox is what would be the easiest as it has the least amount of customization, giving only the basic map options like size, number of rivers and yes or no to terraforming, as well as basic AI and event options. Career mode does all that but layers on finance difficulty like the starting loan, and product pricing and demand. Scenario mode lets your customize the whole thing, including everything from the other modes plus what buildings you can use, hill and mountain sizes, resource amounts, random events, and final win objectives. You can make the game as brutal as you can and really turn that rise into a trial of torment. That is what the game does best. It’s gives you all of the options you would want but offers them in limitations where any skill level can play. It does although mean that you have to judge how you want to play. If you want a challenge, you have to make it a challenge. With things like bankruptcy only in one of the three modes it can lead to players having to make their own objectives most of the time.

As for the other areas, well it’s a tycoon game so mechanics are the focus so everything else like graphics are set to being backgrounds. But that doesn’t mean they didn’t try as the visual design is a basic 3D aesthetic set to rigid but fluid lighting. Each building is designed to be distinctive so from one look you an tell what it most likely does. It leans toward a clean and crisp design so each part isn’t a distraction that tears your eye away from what your meant to be focusing on, but each part always remains clear when you look at it. Like when you first see pollution spread from your factories it has the look of a grey gradient like someone turned down the saturation but the rest of the area remains the same. Clear but not distracting.

This design choice takes a hit when it comes to the on map resources. One of the few criticisms I have for the game is that the resources that generate with the map, (coal, fish, iron, etc.) just fall into the background and often you’ll have to use the region resource tracker to find them or leave the labels on which negates the clear design. But that being said, there’s not much way round it as making them distinctive and obvious makes them distracting. It’s the main disadvantage of the design choice they went for.

With all that said and done, Rise of Industry is extremely good. It gives you many options on how to play, a crisp design that looks great, and a lot of options for customization including built in mod support. While it could do with spacing some of the harder options to easier modes to give a more clear end game, it still comes highly recommended. A great tycoon game to new and old players.