Available now for PC and Xbox One

Reviewed on PC with a Press Copy.

This game is achingly nostalgic. It’s a rather forward statement to start with but the whole game drips with nostalgia all the way from the art and design to the sound and story. Added to that is a sense self awareness that means it remains light while poking a few jabs. I can’t say it’s wholly perfect but the good far out ways the bad. 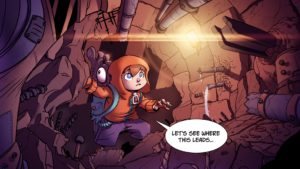 The game centrers around Rise, a child in the land of Gamearth, a land of video games. He given Shine, a talking magic gun, and is tasked with ending the invasion of the Space Grunts from the planet Nexgen. From that you can tell were the aforementioned poking of the fun is going to go. A lot goes into visual jokes and references but it’s goes slightly deeper as the story itself is built around game logic removed from references. That being, the story still lives even if you take out all the references. The best example of this is one of the early levels were a joke is made about a pair of enemies standing around red, explosive barrels for no real reason. But it’s placed after barrels are rolled at you as part of a screen end boss and the explode-when-die enemies are brought in right after it. The joke caused me to roll my eyes at it has an on-the-nose delivery but it not out of place in regards to design and it helps set up new level enemies. It just becomes a joke that falls a little flat over a self indulgent reference that doesn’t work. Most of the game is built like that. It’s self aware but not self indulgent. The sections of dialogue make reference to Rise dying and respawning but death itself comes in as a puzzle a few times. It has lots of references through the background but doesn’t pull your attention away to them while you play to make them.

The rest of the story follows normal standards. You are the hero that was (kind of) prophesied and Shine is you sarcastic mystical weapon that joins you on your quest. You even run into a helping traveller (who just looks like he’d be voiced by Phil LaMar, might be because looks like him a bit) and a orphaned mute girl. Although, the final scene and it’s led up was novel and extremely well done.

The gameplay on the other hand is a bit of a mixed bag generally. The main part of the mechanics revolves around cover-based shooting mixed with a bullet-hell-shooter. It’s and odd mix as a cover based shooter is led by rhythm and timing while a bullet-hell is led by speed and precision. Most of the time, the cover shooting is for the main level sections and the bullet-hell only comes in during the boss fights. That’s except for the last level section. The last level is were they mix and were the game has a tendency to fall in to bullshit were each mechanic breaks the other. For example, the start of the last level (the fight to the final boss), is were your stuck behind cover as a swarm comes forward as normal. At times, some of the enemies can fire so quickly or there is so many enemies on screen that popping out from cover becomes a waiting game. But your cover is slowly destroyed with waiting. And there are moments were you have to shoot the swarm of incoming bullets or you’ll be hit while in cover. I managed to finish the game so there is a way through, either through firing as fast as possible or being able to switch to and from grenades quick enough. For me, it just became a sequence of events to precisely deal with over combat. It became a puzzle were any deferral from the solving sequence would eventually lead to failure which is a departure from the rest of the game. I didn’t end the game angry though as the final boss (while being a bit of an arse to beat through it’s one-hit-kill attacks) moves the same as other bosses and the end is novel and a bit of a programmers inside joke which falls between being very meta and a deus ex machina.

There is one area were some people will have complaint and that’s game length. Because of the mechanics, it has a range of 2-3 hours for the skilled and 6-8 on the not with myself falling into the 4-5 hour mark. This is with a price of £8.79 through it’s on Steam release deal (£10.99 regular price). Some will have quibble with that. But this is were the first sentence of this review comes in.

“This game is achingly nostalgic.”

It’s a love letter to the games of old and all that comes with them. It’s hard the same way that the old games wanted to drain you of quarters. It’s filled with references to the old as a way to put them on a pedestal behind glass. But if you understand the subtly of the story, it’s placement of it’s characters and the ending in particular, you’ll see the passing of the torch to the new generation of games and the death of the old. There’s a reason why the “invaders” are called Nexgen and why Rise is related to them. And why the now dead long time king of Gamearth’s last message is remembered by an old system. And why JRPG Island is left untouched even with the “war”.

The price and the length of the game is going to be point of contention of some. But even then I’d say wait for a deal you prefer (or get it while it’s on it’s release deal) and play it. The comedy and reference is only the first layer to the (perhaps or not intentional) death of the old style of games and the beginning of the new. I recommend it as a love letter and as an obituary to the games of old. And, as the pun I think they may have going for, it’s time for games of new to “Rise and Shine”.