Only managed to see one story…

This week ended up being full of work related stuff. Some may know that I make videos for myself via my YouTube channel as well as videos and articles for the Torch. This just ended up having me spending pretty much all of this week to write pieces and edit videos and photographs. I only managed to see one news story this week. Ubisoft has pulled it’s new releases from the Steam store here in the UK. At time of writing (because this may change, the hell if I know because Ubisoft is schizophrenic sometimes,) they have pulled their new releases, so their old but released games are staying, from the Steam store. They haven’t even explained why. All they said was;

“We’ve been in discussions with Valve about Assassin’s Creed Unity but for the time being the game is not available via Steam in the UK,”

“UK customers wishing to purchase the game digitally can do so by visiting the Uplay store, our retail partners or other digital distributors.”

If your going to make block a platform you can as least tell us why. And if it really is about price, just so you can jack up your prices, screw you in your miserable, money-grubbing taint! 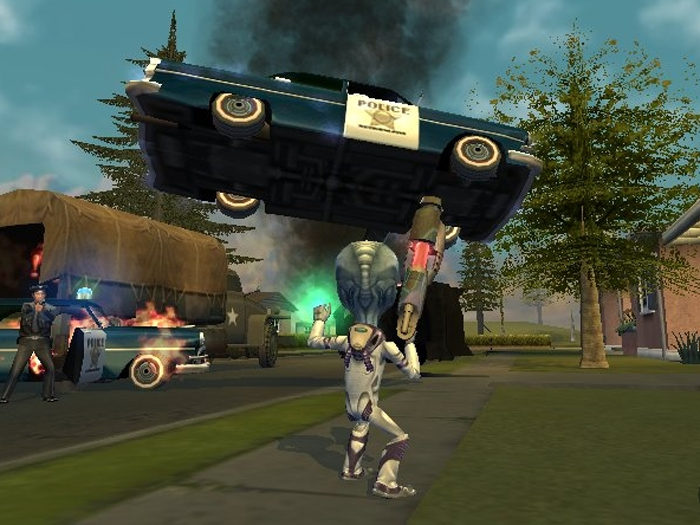 You play as Cryptosporidium (Crypto), an alien from the planet Furon. He is joined by his sort-of boss Orthopox. He’s the one that gives Crypto orders. They have come to Earth to steal out brain stems and take our DNA so they can continue cloning their species because, due to generations of cloning, they have lost out their ‘junk‘.

Like most of the B-movies, they start out by landing their flying saucer (designed to look like a futuristic version of one of those 1950’s sacuer’s) in a farm. They starts by trying to talk to a cow, thinking that they are the dominant species. Yeah it’s been done before and better but they don’t really dwell on it. It just used as a controller tutorial. First to show of the main ability you will be using, your psychokinetic mind-reading. It reads the mind of a person but also refills yours psychokinetic bar. After getting angry at the cows you starts to fling them about with your psychokinetic powers. You can lift objects and throw them about with your mind. You start out only being able to lift people but you can upgrade it so you lift cars, then some of the more heavy army machines like tanks. After making a ruckus with cows, the farmer comes out armed with a shotgun. But you are armed with an electro-gun. This is your primary weapon. It uses no ammo but it does have a fuel bar that refills when your not firing it. Like the psychokinetic abilities, you can upgrade it so you can chain and get more per burst. In another raising of the stakes, police show up. You kill them and then a small army group and a tank show up. Out gunned on foot, you return to your spaceship and crack out the death ray. Like the electro-gun, it is your ships primary and has a burst-refill ammo use. Both of these just mean that you won’t not have a gun to fire. In the early stages of the game, ammo is pretty scarce and the guns without any upgrades don’t have much space in their clips.

After seeing what surmounts to the games ‘Men in Black’, you go to another level and are tutoralised in the rest of your psychokinetic powers. By that, you clocking power. If you are seen in you alien form by anyone, you will get a police response. The clocking power lest you mentally project the image of another human around you. This is a constant drain on your psychokinetic energy while it’s active so you have to mind-read to refill your energy as you wonder about. It may sound easy, but later in the game that have alien detectors set up to you have to force-push destroy them while keeping your clock and psychokinetic energy up. It gets pretty complicated.

But like I said and the beginning, the game is built around B-movie, 1950’s and pop culture references so it really comes down to whether its funny or not. Thankfully, it is. Their are a few of the “Duke Nukem” style references where they just point at a thing, but they do poke and make a lot of jokes about the traditional 1950’s conformism and the ‘Red Scare’. That’s because while you are questing for human DNA, your ‘Men in Black’ enemies (named Majestic) are keeping America in line by saying that it’s ‘those damn commies!‘. It gets very funny near the end because every out of the ordinary thing is explained away by them as ‘it’s communists‘. It like saying ‘a wizard did it‘.

There was an attack on a TV station!

There was a spaceship in the sky!

DC was attacked by a the flying saucer and lasers!

There was a 50 foot robot fighting the saucer!

That was the brave robot president fighting Communists!

The game has plenty if nerdy references and joke to keep (who are now popular) while not alienating people who just want to play a fun 3rd person shooter were your job it go nuts and shoot the place up with space weapons. Lots of lasery, shooty fun.