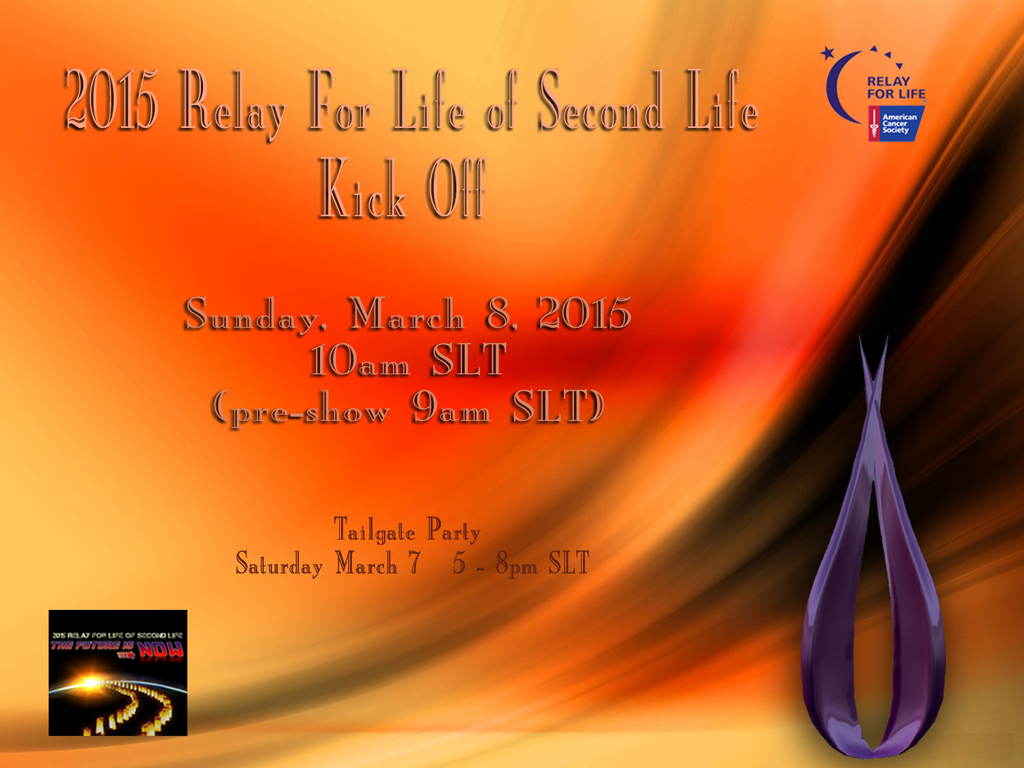 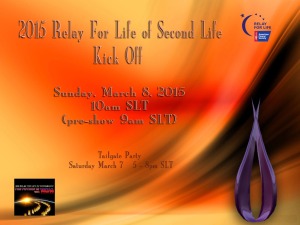 On Saturday, March 7, everyone is invited to a special Paint Second Life Purple wrap up party, as our many relay teams will begin setting up for Kickoff 2015! The party will be held at 5pm ( to 8 pm slt and will be hosted by T1 Radio.

About Relay For Life of Second Life:
Relay For Life is the signature event of the American Cancer Society and has been active, and continually growing in Second Life for 10 years. In 2005, the first Relay For Life of Second Life (RFL of SL) was attended by a few hundred avatars and raised almost $5,000 US dollars for the American Cancer Society. As of July 2014 RFL of SL ranks number 17th out of 5000 teams worldwide in donations received. We have brought in over 2 million US dollars to help with the fight against cancer. This year our Relay weekend will be held on July 17th and 18th.

About the American Cancer Society:
The American Cancer Society is a global grassroots force of nearly three million volunteers saving lives and fighting for every birthday threatened by every cancer in every community. As the largest voluntary health organization, the Society’s efforts have contributed to a 22 percent decline in cancer death rates in the US during the past two decades, and a 50 percent drop in smoking rates. Thanks in part to our progress nearly 14.5 million Americans who have had cancer and countless more who have avoided it will celebrate more birthdays this year.  We’re determined to finish the fight against cancer. As the nation’s  largest private, not-for-profit investor in cancer research, we’re finding cures and ensuring people facing cancer have the help they need and continuing the fight for access to quality health care, lifesaving screenings, clean air, and more. For more information, to get help, or to join the fight, visit cancer.org or call us anytime, day or night, at 1-800-227-2345