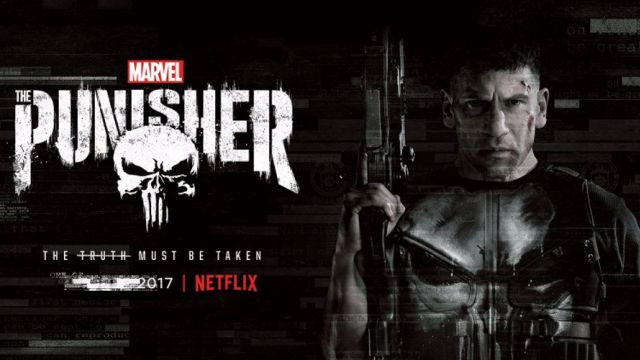 The Punisher 2017 series, is the sixth Marvel property to head over to Netflix and stars Jon Bernthal as the title character. It follows Frank Castle, an ex-US Marine, as he tries to evade the sights of a Homeland Security Agent, Dinah Madani, while trying to seek vengeance for the murder of his family and does this the only way he knows how, as the Punisher.

First of all, yeah, elephant in the room, thought we wouldn’t see you until 2018, Frank. I’m glad to see you join us, especially after your little skint in Season 2 Daredevil, but I prepared myself for a long wait for you, only to see you pop up on my Netflix Notifications. That being said, it’s very nice to have you. I didn’t watch you right away, but still, it’s very nice to have you.

Secondly, holy crap, I binge-watched this show, the last time I spent the whole day watching a Netflix Marvel series from start to finish it was Jessica Jones, and that is my favourite series out of the Netflix Marvel shows. Now, I do believe The Punisher Series is now one of my top 3 Netflix Marvel Shows.

Jon Bernthal was amazing, the music was fantastic, the action was on par with Daredevil Season 1, the cinematography was brilliant, even more than the Defenders. I enjoyed this season thoroughly.

I have watched two out of the three previous Punisher movies, Ray Stevenson, did a good job, but I don’t really

remember anything about his Punisher, I never saw Dolph Landgren’s 1989 version of the Punisher, but I have been told he was great. The closest to the feel of the Punisher character for me, was Thomas Jane, and I don’t mean the 2004 movie, I’m talking that the web short Dirty Laundry. I mean, I enjoyed the movie it was my first time seeing the Punisher on the silver screen and while they did change a lot of things, he basically nailed the character… towards the end of the movie. Jane played the character in Dirty Laundry brilliantly, but he does not compare at all to Jon Bernthal.

Bernthal managed to be compassionate and still look hard as nails.  You felt for Frank Castle, he made you feel heartbroken, he made you feel his pain and his endless suffering, he made you feel angry. He made you want to see him succeed in getting his revenge for his family. Then when he started ripping through men like they were nothing, he made you scared, because this broken man, just decapitated someone, stuffed a bomb in the person’s mouth and used like a bowling ball. Then you feel even worse because you’re thinking these guys weren’t bad men they were just doing their job. Frank Castle is a horrifying person, this man is a monster and Bernthal played that role perfectly.

Dinah Madani, played by Amber Rose Reveh, what can I say about this woman? So, she isn’t from the comic books, and personally, I believe they should have just given her the mantle of the future Lady Punisher. Just throw that seed and plant it, Marvel, because Madani was either the worse written character or is just that damn good at her job.  I have a few favourite scenes from the show, a lot of them with Frank Castle, a few with Micro but my favourite Madani moment was her finding out her office is bugged. She sits in front of the suspect board; her back is turned to it. she turns slowly, looking up at the board, and yeah you could see the cogs turning in her head. I love that the logical step was, ‘my office may be bugged’ not ‘maybe we have a mole in Homeland’, not ‘maybe I said something or someone overheard something and repeated to someone else’. It’s ‘there is a bug in my office’ and she got it right. Damn, Madani.

The comic book aesthetic was back again in this season and I swear, once you notice it you can not stop seeing it. There were several times, especially during the later parts of the season that I found myself thinking, ‘Man, the way they set up this shot is really damn cool’.  It is something fantastic when you appreciate a piece of entertainment, not only for its mindless violence but for its cinematography and direction too. The scenes with Frank and his wife, Maria, were beautifully shot. They start off in their bedroom but soon, there is nothing but the same scene played in a black room, with just the bed, it felt and looked like what a comic book page. I enjoyed, Kelli Barrett’s portrayal of Maria Castle, for how brief her scenes were over the course of the season, were very power scenes, and I liked that they were memories that played different roles for Frank. They were happy memories, they were regretful memories, they were nightmares and in the end, they were memories that kept him going. They haunted him in his dreams but ultimately, they pushed him to his limits and kept him sane…or insane, depending on how you look at it.

So, Marvel’s Netflix properties tend to have a clear overall message behind them. Jessica Jones had a message about surviving abuse and getting closure on the past. Luke Cage was about the struggle of growing up in Black society, Daredevil was about justice in the eyes of the law and in the eyes of faith and religion. I have no idea what Iron Fist’s was, I guess, if you dug deep enough, you could see the message of duty and obligations that come with power. I suppose.

Well, Punisher has one too, and much like Jessica Jones, it’s a hard-hitting one. Punisher deals with PTSD and veterans of war being forgotten by society as well how they deal with being integrated back into society after being at war for so long. This is handled very well, and while they couldn’t deal with the idea with Frank Castle for obvious reasons, he had a lot on his plate as it was.  it didn’t stop them from exploring the topic with a completely new character, Lewis Wilson played by Daniel Webber. Now I could explore and talk about Lewis for another 1,000 words on his own. Exploring his character, the development he goes through, his psychological progression and how it leads to him mimicking a real-life event and person.  I could talk about that, but this article is already too long.

Overall, I loved Punisher 2017, the story was great, I loved the music, it was a huge improvement over the Defenders and Iron Fist, and showed that true storytelling was not dead in the Netflix Marvel shows. Also, they tried to talk about gun violence and regulation but we don’t have talk that about because that story point was weak as hell and was probably just a background noise for the bigger climax.

If you want to watch Punisher 2017, you can enjoy it right now on Netflix.