“Overture” is a rogue-like bullet-hell shooter with dungeon crawler like RPG elements. They are two things that don’t really go well together. While “Overture” is good, it split focus ends up being a big problem with it. To really get into the problems the game has I have to say how the game is played.

The game is set in ‘nondescript fantasy land’ were the usual skeletons and orcs roam. You chose from a set of 24 different player characters to play as, all with different skills. Each character has a different primary attack (that you can fire constantly) and a different magic attack (that is limited by you mana) as well as a different speed stat that isn’t mentioned. With there being a very large roster of characters they vary from the good, the fun but crap at boss fights, and the downright useless. Some have a ranged attack, which is almost mandatory in some stages, while others has a melee attack. Some of the melee attacks are ok, like the Brute who I have come to calling Odin or Mjölnir because Thor would have been to obvious. Other melee attacks are like farting in the wind. They have the same impact as if you were using a feather duster to brush off all the mucky muck of their wee little armour sets.

Each level is a randomly generated (but pre-set in size) collection of Zelda-like blocks or some version of a tree that won’t move but can be destroyed, areas of land and water that you can walk on but slows you down to the speed were your scraping you arse on the floor so might as well kill you, and interact-able pick up boxes. The boxes come in the form of regular boxes that hold an NPC that you can free then they join you until they inevitably die and maybe an item, a regular chest that holds a mixture of coins, potions and maybe an item, a barrel that holds the same but also might only have a cloud of farts, a sword rack that will hold at least on weapon, and pots that are the same a barrels.

You may of noticed that I said weapon pick up and item pick ups. That is because the game has RPG elements. I even said it in the first sentence to prepare you. You can pick up a ring, an essence, a sword, a shield and a chest piece. Each changing your stats in different ways that you can probably guess if your on the fantasy ball.

On top of the RPG pick ups, there is an RPG levelling system. When you are in-game you gain experience that increases your level. And when I say gain experience, I mean collect coins that give you experience. You gain experience by collecting coins and killing enemies but you don’t get anything from enemies spawned by traps. So after floor 2 with it’s sudden and massive increase in traps, you will get nothing from most enemies because the game resembles “Robotron: 2084” but more of a particle effect cluster-fuck with full colour graphics. I guess if you gained experience by killing every enemies you would fly up the levels. So rather than having the levelling being token, it’s just pointless.

Part of the reason why enemies end up being such a problem from floor 2 onwards is that traps stop being traps and start to follow the meme that goes “SURPRISE, MOTHA’ FUCKER!” There was one point where, after I fought of the areas standing horde, I set off a trap. As the game is mostly bullet-hell shooter I moved to a better fighting position, and set off another trap, and another, and another. Soon I have well over 100 enemies surrounding me with no escape and not enough firepower for a hail Mary last man dead wins. To see how dense the traps were, the next time I got to floor two, I carefully stepped through the floor (which means trying to shrug off broadswords to the chops) and found a trap. I then scoured the area to see how dense they were. Turns out, in a 20-25 block square area there were about 8 traps. Some were 4 blocks away from each other. This just means that, because it is a bullet hell shooter and moving is the point of one, if you set off a trap then you are almost guaranteed to set all the others off. There was another time just before recording were I set of a total of 1 trap on floor 1, but as soon as I got to floor 2 three traps were around the opening stairwell were you spawn. It felt like I was back in an old adventure game were walking a few paces in the wrong direction kills you. But why don’t you just dodge them I hear you ask. I would, if they were more then a 1 pixel thick circle of brownish-red on a brownish-grey floor that appears only when you near it and when you sprint forward you are only a maximum of 2 blocks away from the edge of the screen. Then use the other camera method were it follows your pointer rather than your character so you can see further you would retort. I would just get killed by an enemy making me use a sword a a suppository as you end up 2 blocks away from the other end of the screen. 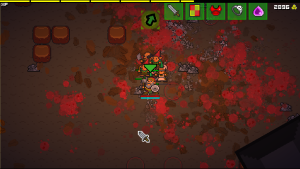 The trap density would be forgiveable if the camera wasn’t so bad. The base design of a bullet-hell shooter is you are at one end, enemy at the other and you fire and dodge till one of you dies. The camera here is so zoomed in there is no chance of telling what is ahead of you before its stabbed you in the face. If the centralised camera actually had your character stay in the centre of the screen rather than try and run off screen every time you sprinted (which is a mandatory mechanic by the way because your firing moving speed is, as it should be, crap). And before people say “get good scrub”, rogue-like random elements punch skill in the face because you have no control over it. The only thing you have control over is the tear of your character.

The gold you collect in the game lets you tier up you characters, giving them more attack stat and that’s it. So rather than tier-ing up everything you only get attack power making you have a glass jaw. I have characters that are tier 11 to have +50 attack power at the start of each level but it is useless. Ranged enemies, as soon as they are triggered, will fire across the map to get you while standing stock still. Most of the time I play I end up having to fire off screen at en enemy I can’t see because that is were they are firing from and I cant get any closer because the camera is so zoomed and rubber-banded to you character that I’d end up running into them before I could fire at them.

This game is great but there is a special place in the pit for a camera this bad. Because it is so zoomed in and only vaguely attached to your character you will be killed from off screen or swarmed because you backed into a group of skeletons playing cards and fell into the chip pot and caused a faux pas. Otherwise, there is a character for you in the huge roster and the RPG elements add a nice twist to the game. I just think that the bard retelling these heroes stories of valour is drunk and every now and them falls asleep because that is what it feels like the camera is doing sometimes. At least the bard could have some coffee or just not knock over the tripod when he hits the table.