Skip to content
Gameplay Games Guy Off The Internet/Wil Morris 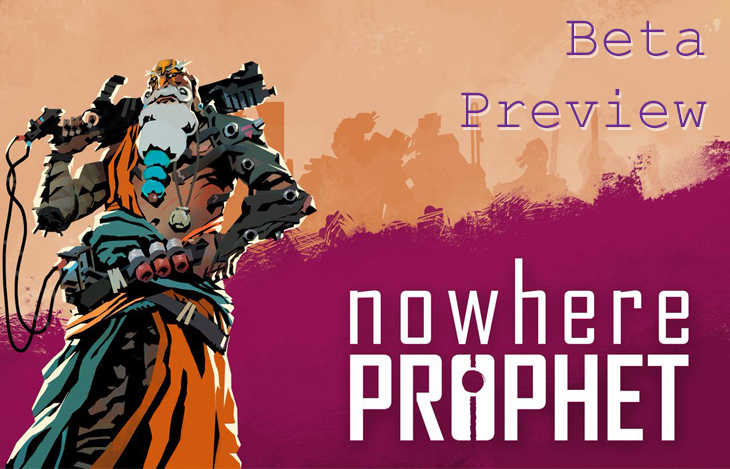 Well it’s safe to say that this one talking about the Nowhere Prophet Beta preview is almost as late to the party as you can get. But with the announcement of the full release date, 19 July, I should get introductions out the way before a full review.
Nowhere Prophet is a card game with randomized hardcore mechanics. You’re a digital prophet in the post apocalypse, which takes design cues from Indian/Indian subcontinent art which is a nice change. You and your convoy of followers set out across the wastelands to the end goal of finding sanctuary while facing trials and challenges along the way. You use food and lose will as you travel so it becomes a balancing act of distance to travel and restocking at stop-offs. You also get into fights with other travellers and waste-landers.

The fights are the core and best part of the game as a whole. It’s a card based battle system, with you placing units down on a grid with only those up in front able to attack. But the interesting twist compared to other card battlers is that the units are really weak. Even the most powerful cards can get one-shot discarded. So you can end up playing it more like a puzzle and considering your actions several moves ahead. It’s built around the tactical use of units to build a larger plan rather then just stacking up units and barraging the enemy. The added twist on the twist is that each card, once defeated and discarded in battle, gains a wound. After two wounds, the next wound kills the card permanently. And as the convoy you lead are the cards you use in battle, you can become a convoy of bones pretty easily if you don’t act carefully enough in battle. And that’s on top of you managing your own health between battle and events too.

The game is brutal. Every article I’ve seen makes the comparison of FTL and I can see where that comes from. You have a set web of paths, some hidden until you go looking for them, with you scavenging money (in this case batteries), food, and resources on your journey. But the big difference is pace.

In FTL, you’re in a constant state of running away from the encroaching enemy force. Here your not. Your free to explore the map as long as you want with your only limit being food and the will of your convoy to go on. The battles don’t need pausing as the do in FTL as it’s turn based so you have all the time you need to figure out your next move and all the enemy attacks come in at once.

It’s why I’d rather make the comparison to chess. ‘It’s not your current move but your next one‘ is the phrase fits how you’ll most likely end up playing. The brutal, hardcore nature of the game makes you plan ahead and be more tactical.

Then there’s the tone of the story. FTL is you leading your ramshackle crew in a last ditch run not sparing every last scrap and bullet. Nowhere Prophet on the other hand is you leading your followers in a search of an end. No running, no fear, no last stands, just you leading a search for your foreseen hope. 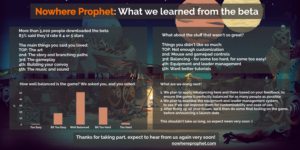 I loved playing the beta and not soon after the beta finished they announced what they had learned and what their plans where for the full release. For the most part I agree with their findings but there would be one difference I’d have and that’s the ‘stuff that wasn’t so great’ list. I’d have it in the opposite order with what ended up in number four and five changed slightly. Customization wasn’t much of a consideration as I liked the set designs and the basic battle mechanics trended to more basic deck management. I had no problems with controls, and balancing seemed reasonably fair, as far as that can be said for a game as brutal as it so I can see where and why they would tweak the difficulty. The equipment and leader management I’d divide in two as there was enough and varied equipment but there wasn’t much to do as leader. You had leader cards but depending on your battle play style, you’d just go for the same cards in each run, and you don’t actually do anything outside of events/battle as leader. Similarly, the tutorial itself was fine but there’s one part of the information presentation I had a gripe with. And that’s the information on the cards. At times it just didn’t explain the cards in enough detail. Especially when it comes to field hazards and the more powerful and status heavy cards. Although that would just be solved with more detailed information in the battle pop-ups of the cards that are already there. So only a small change, and considering that was my biggest gripe it shows how well the game is generally designed.

All that being said, with the worst gripe being a decadency of making ‘so what does that mean?’ moments in battles, the rest of the game is very well designed. The stand out is the Indian design, with lots of mandalas and Sikh imagery tied with the techno-apocalypse world. It did what a game of this genre should do and that’s make me want to explore it.

I can’t wait to see what they do with the game on release. It’s really is one to watch.