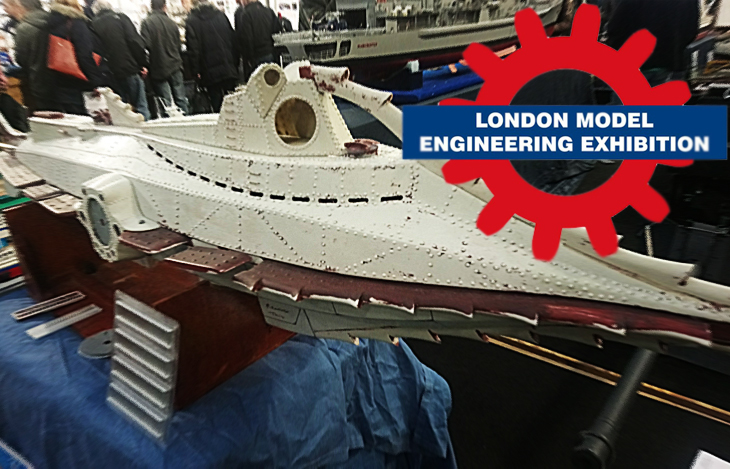 The Model Engineers Expo is an event that is held every year at Alexandra Palace where tool makers and model engineers, that’s mostly people who make model steam trains, come together. Now I know what what you may be thinking; what does this have to do with entertainment? Well I’ve actually been meaning to write a piece on this for some time. I’ve been going to the expo for a few years now as the Dad is one of the ‘people who look at trains’ lot, (being one who used to work on them with London Underground). So I’ve seen what there is to see and what is usually there year to year. So what ‘entertainment value’ so to speak does this expo have?

Well if you like looking at models there’s plenty to see. A lot of the London and national model making groups have displays of models ranging from militaria to steam trains to pop culture and fiction. Meccano and Lego also always have stands showing off their local build groups and models. On top of that, in recent years areo-models and drones have had bigger sections to the point where there’s a flight demo area in the corner of the expo. In years gone by, there have been one off displays including a year where there was a slew of 3D printer companies and one year had a small display from the Fighting Robots Association, AKA Extreme Robots, AKA some of the people off Robot Wars who grouped up to keep going before it got new series’ and got cancelled again.

So it’s been a pretty mixed bag for the few years I’ve been going and it’s not just for the ‘old men who look at trains’ crowd that many would think it would be. This is part of the reason why I’ve been wanting to do a piece on it. A lot of what we cover and talk about can be applied to the expo.

For example, a lot of props and the more extravagant parts of larger cosplays are usually built from the ground up with model making and costumers tools, so an event like this is a good place to get them. If you don’t or can’t find it on the internet anyway. So if your looking for some PVC cutting and glueing tools, or just looking from some bits of PVC or wire, you can find them here. On top of that, the drone section offers general electronic parts as well like battery packs and LED lighting cables so if your looking for some of the more advanced supplies that you’d have to go to a specialist to get, you can find those here too.

This is the advantage of events and shows like this. Like pop culture events like MCM and EGX, a lot of companies come to sell you their wares and some of it is stuff you wouldn’t of thought about getting or things you may have trouble finding even on the internet.

But going there this year I had another thought, and it’s not as circuitous as saying cosplayers might find stuff they might not be able to find on the internet. And that’s Warhammer.

Over the years, I’ve talked about Games Workshop and their tabletop mini-fig war game Warhammer a lot, (mostly their 40,000 branding as I never grew out of the 90’s). And thinking about them while going round I had a thought; “why isn’t Games Workshop here?”

A lot of the model makers tools that the ‘old men who look at trains’ crowd use are the same as the specialist ones that figure makers use. Poly-cutting scalpels and mats, ring light magnifiers, fine detail paint kits, the Venn diagram of ‘old men who look at trains’ and ‘people who make and paint mini-figs’ does have a lot of overlap. I even thought of a few design modifications using the new environments that Games Workshop has been advertising recently like making the Promethium pumps move, adding LED lighting to grids, and adding steam emitters to stacks. You can make a battlefield that is in motion and interactive with the same tools. Or you can just get the special poly tools and paints. Hell, this year there was a specialist paint supplier selling similar sized paints as Citadel, Game Workshops pre-made model and paints arm, but in the specific Great Western Railway colours.

So to Games Workshop, if your unlikely reading this, there’s a room section next too to the hall where the expo is that’s always empty. It’s always empty as the other side of Alexandra Palace has the Masters Snooker Championship on at the same time each year and in the building layout it’s an odd one out room. It’s a big space so you can set up a stall there. Have a display there, a whole battlefield even where you can do demos every now and then over the three days. Show off and have your in-house painters there giving advice, sell the books and novels too. Can be a small thing that gets you out out of Nottingham and gets a few days in London. It’s an easier sell here too than places like MCM that are far more filled with pop culture stuff. I’d even say that indie game stuff is slowly moving out of MCM but ReedPop also owns EGX which is still getting bigger so that might be on purpose. Anyway…

While the London Model Engineers Expo might not have obvious appeal, a lot of the niche areas that are connected to gaming and movies are there. The only big issue is that it’s quite small compared to other events. But hopefully in writing this, more companies like Games Workshop and other model making companies and maybe some cosplay prop makers will join in years to come. Because after all you don’t have to be engineers so be model makers.