When I first started getting press releases about “Northgard”, it was being touted as a up coming RTS. The next one I got, near enough the next day, it was saying that it had shot up to number one on the Steam Download Charts. After spending a lot of time in the game, I’m not surprised it went to number one.

With it being in early access, a big chunk of the game is missing. That primarily being any sort of campaign or any sort of multiplayer. What is there is a single match mode against the AI (with a max of 3) with a relativity complete set of mechanics showing the breath of the game.

The game is set in the fantastical world of Northgard, a Norse/Viking inspired world, where the winner is declared ruler of the land. The visual style reminds of Disney’s “Atlantis: The Lost Empire” (2001) with a exaggerated, squared off style with very deep colours, made up of mostly blues offset with the vibrant green grassland. It works well with the Norse setting and design with its curves, although the famous Norse intricate pattern detailing is lost from the ‘god-view’ style of camera which is part and parcel with this style of game so can’t really fault it. Although, you can zoom in pretty close and see some of the smaller details and animations and it is all very well put together.

The game plays like a combination of an RTS (more“Age of Empires” in ilk) and a civilisation game. The matches play out in real time over a sectored map as you build up an tribe, claim land sectors and gather resources. 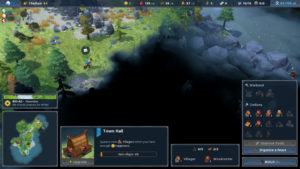 There are the three core resources, wood, food, and coin, which most of the regular buildings are built with. Then there is the advanced building and upgrading resources stone and iron that are used for specialised buildings and upgrading. Most of your time will be devoted to the managing of your resources as, with the random generation of the maps, you have to search for optimal places for gatherers. Some places are required, like a sector filled with deer for hunting, while others just give a boost in production, like a forest for woodcutting. The core resources are infinite, so as soon as you start hunting or woodcutting you have a regular source, but the advanced resources aren’t, with stone and iron piles used in mining being eventually depleted. It means that you can get to the point of surviving pretty easily but needing to tacticity use the more rare resources more carefully.

What complicates matters is, part of the real time, is a seasons mechanic where the winter months are a frigged, snowing winter where wood use is up (through an increase in your passive firewood use) and food production is down (while your food consumption doesn’t change). It adds a complexity were you have to plan your movements and building in accordance to your winter stocks. You could claim another sector but that needs food and you need food for the winter or you could build that needed watchtower but you need the firewood. There is a selection of random events that happen over the year, like a scourge of rats or hell portals spawning undead but it feels more like its check-pointing your building. By the time you have a rat rampage, you should of already built a silo for increased food storage/production or have a few warriors about fighting the local wolfs by the time the undead arrive.

The combat and warring in the game at the moment is much more built on bigger army wins. There is an element of advancement but there is only two solder types, the warrior and the warchief, and you can only have one warchief. The unit that has more of a sway in combat is the cleric, he de-facto medic, who heals any damaged unit when it’s in any friendly controlled sector. After a few upgrades (especially with the Goat tribe) the healing becomes so fast you can just wear down buildings and units with less then a handful of warriors.

There’s many ways you can win matches. You can either win by ‘Domination’ (killing all enemies), ‘Trade’ (having a set amount of merchants and cash), ‘Wisdom’ (having a set amount of lore (research) and lore masters (the researchers)), ‘Fame’ (declaring yourself king with famous acts) or by a map special. The map special is connected to the Norse style with objectives like “Control Yggdrasil” or “Reforge the Sword of Odin”. Mostly it comes down to build a thing or control a special sector for 12 in-game months.

With the way the game is currently designed, I would say that the best path for the game to take would be to head more towards Civilisation then Empires. Mostly because of the map sectoring. The RTS mecanics add elements of complexity but what I found myself wanting most was a bigger map, more precise resource management, and more complex warring and tribe communications.

There was one time where I was behind a smaller faction but was trading with them so they wouldn’t war with me. But the one next to him was the tribe that was winning the same way I was but I could get to them as I had to go through them. If I killed the ally I would run the risk of their territory being captured by the enemy I wanted to kill. There’s other times were I was the smaller faction and I wanted to play the larger ally against the even larger leader.

What is there is good and I very much like what’s there. But there isn’t much there at the moment, in complexity or in content. It’s a sign of a good game when it leaves me wanting more. But I also wanted more map, more unit types, more complexity and more management. They have said there is a fair bit to add so any sort of final judgement is wholly reserved. I really want to see were this game goes and I’d really say keep an eye on it. Although with it being number on on Stream, you probability already have it.