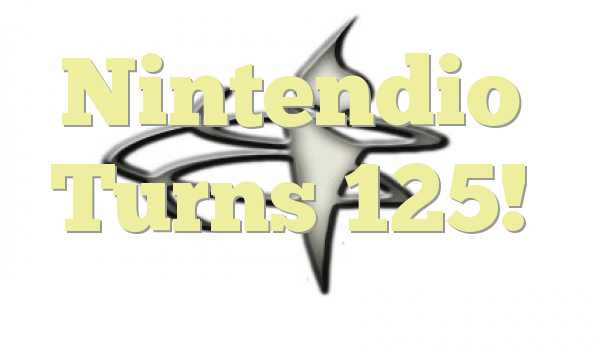 Today, or yesterday depending on what time zone you’re in, is the birthday of the Nintendo company. So it would be more of a founding day then a birthday. On September 23rd 1889, the Nintendo Koppai company (or the Nintendo Playing Card Co. Ltd. In English) was founded Kyoto, Japan by Fusajiro Yamauchi. Or yesterday in Japan because of the pre-stated time zone time difference.

Back in 1889, Nintendo, roughly translated as “leave luck to heaven” (the same sort-off way Lego means “play well” in Danish), originality started as a maker of hanafuda playing cards.

Hanafuda cards is a deck of cards that are divided into 12 suits, each one representing a month of the year and a flower. Like western cards there are many different types of games that can be played with hanafuda cards. Here is a video of me (Wil) trying my hand at “Koi-Koi”, one of the hanafuda card games.

Nintendo started making handmade, hand painted cards on mulberry tree bark. They still make cards too, although these days, every now and then, they divert from tradition and make card sets with their properties on them like Mario. But that wasn’t the first time. In the 50’s, when Hiroshi Yamauchi, the grandson of the founder Fusajiro, went to the US to see the largest western card maker at the time (the United States Playing Card Company) he saw that even they where working out of a small office so he wanted to expand, and managed to get the licences to Disney characters to put them on their cards.

In 1963, he then shortened the name of the company to just Nintendo Co., Ltd. This was the point where many new ventures were tried. They tried expanding into being taxi company, a ‘love hotel’ chain (it’s for couples you dirty minded ones), a TV network and others. They all failed. Soon after the company profits started to take a hit. Cards just didn’t sell as well as they used to. In 1966 they tried selling toys, like the ‘Ultra Hand‘, an extending claw thing for those modern types. Considering their rival companies where Bandai and Tomy, the toy venture failed as well.

Then, in 1973, they throw the dice again and made the ‘Laser Clay Shooting System‘. It was an early light gun system connected to a projector, set up in old bowling alleys. It was what its was called, an indoor laser clay pigeon shooting thing. It was quite successful. But when the 1973 oil crisis and the recession that followed hit Japan, Nintendo went down the money hole so it was redesigned smaller for arcades and re-released in 1974. It helped get them out the hole.

Around the same time in 1974, Nintendo managed to get the distributing rights to the new and first ever home console, the Magnavox Odyssey. With it also being the time when the where moving into video arcades in 1975, video games seemed to be their future.

Then in 1977 they took the plunge and made their own home system called the Colour TV-Game. 5 versions were made between 1977 and 1980. Also in 1977, they hired the then student product developer Shigeru Miyamoto who would, in 1981, create ‘Donkey Kong‘ for the arcades which exploded their popularity. They finally found their niche.

Two years before in 1979, Gunpei Yokoi would come up with the idea of a hand-held, mobile gaming device. So in 1980, with the help of Nintendo, Yokoi would release the first ‘Game and Watch‘. That, combined with the success of ‘Donkey Kong’, lead them release the Family Computer, or Famicom for short. When it was re-designed and released outside of Japan in 1985, because of the western console crash in 1983, it was renamed the Nintendo Entertainment System, or NES for short.

This is the point where most of you gaming people join the party, or at least know where this is going. I would be easer to just list off the consoles and hand held’s rather the reciting their history. For consoles, after the NES it was,

Then there where the hand held’s. First there was ‘Game and Watch’, then there were;

Nintendo is by far the grandfather of the current gaming market, especially the current crop of console creators, so having it still be around is stunning. They’ve had their fair share of troubles, some that would have ended others, (I’m looking at you SEGA and it’s Dreamcast). While I’m not the sort of person to praise Nintendo for its recent decisions (mainly the Wii U) it does deserve a large chunk of respect. Even if it’s just for their perseverance and unwillingness to let the company die.

Well done Nintendo. Happy founding day. I think after 125 years, you can take a day off.