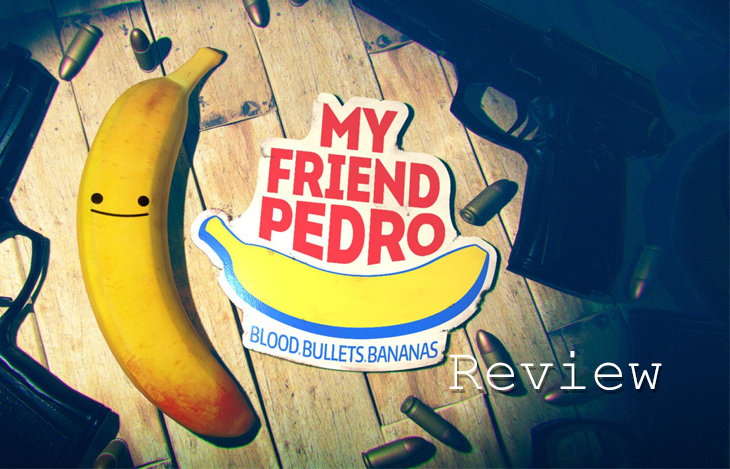 Many a year ago, I looked at a browser game called “My Friend Pedro”. It was good to the point where I did a video on it, did an email interview with its developer (the one man team DeadToast Entertainment), and then meet him in person at Gamescom when he announced that the game was picked up by Devolver Digital. So with that history it’s about time I got to reviewing it.

The aim of ‘Blood, Bullets, Bananas’ was to take the concept of the browser version and expand it into a full release, which it does. More guns, more enemy types, more levels… just more. It’s as a good version of the original concept that was laid out from the start which means it’s a good game. But the best version of that concept isn’t perfect. It has low points that come with highs but in trying to remove the lows the game would end up worse off overall. It’s one of those critic things where if you don’t think about the game to much it’s fine and very fun, but if you take a moment and look around you start to see the cracks in the walls. That’s the first good thing that the game does. It complements a fast pace so the negatives genuinely become less a visible and less of a problem. But I wouldn’t be much of a critic if I didn’t take the time to smell the roses. It also makes the game an interesting test case because it is has clear flaws but it really tries to help the player ignore them by complementing other aspects when they need to. An different example of this is “Portal”, and when the other example is one that’s as widely acclaimed as Portal you can tell how well designed the game is. I just wanted get that explanation out of the way before I get into the meat and potatoes of review as otherwise I’d end up repeating myself endlessly saying ‘that’s specific point is bad but…’. So lets start at the beginning.

Just like the browser version, you start by waking up in a dingy basement with no memory and talking to a sentient floating banana called Pedro. You can immediately see why Devolver swooped in as a publisher. As Pedro introduces itself, it briefly acts as a tutorial saying you can dodge bullets and slow down time. And this is where one of the negatives come in.

With the slow down and the bullet dodge as two separate powers on two separate keys, it makes the full controls a tad cumbersome, especially on keyboard but less so on a controller. You don’t have to use the focus power, the higher difficulties even take it away, but a lot of the ‘coolness’ image is built on it and to do a ‘slow-mo bullet dodge while shooting’ requires mouse/stick shooting with one hand and pressing three buttons (movement, dodge, while tapping slow-mo) with the other. If you want to jump then you can add a forth button to the mix. But with that being said there’s not much of a way around that problem design wise without just combining the slow-mo and dodging like some other games, which would sap away from a lot of the overall difficulty. It’s the first of the ‘that’s specific point is bad but…’ points. Yes the controls can be a sod but the difficulty is built around it so in later levels and difficulties you won’t be key-mashing.

There is an aspect of “get gud” with the controls but that can be more applied to the whole game in general. You’ll end up getting very good at some levels as you’ll replay them a lot of them. Mostly because the game is pretty short. 40 levels total split over 5 worlds including a boss stage. It’ll only take somewhere around 4-5 hours to get through so there’s not much there. But that’s what all there needs to be. In those 40 levels everything that could be done is explored. Melee enemies, sniper enemies, a motorbike level, a laser grid level, mines, shooting puzzles, and even a world built on platforming puzzles. Some of it great. While some of it is not so great. A fair few are just one level gimmicks. You ride a motorbike once. The laser traps are built for one level. The platforming world gives you single level powers for every level in the world. But with everything that could be done being done, your not left wondering if something is possible and it keeps everything short enough that it doesn’t out stay its welcome. Like I said, the high pace works like a charm.

The pace is only lost on the latter levels. The first two worlds, and to an extent the third as well, keep the speed up. But when you get to world four, your over the peak and the game really has trouble hiding it flaws.

This, ironically, is also where BBB really gets into it’s satire streak. The forth level is a sewer level with ‘hardcore gamers’ and and ‘ISP units’ as enemies, with the ISP units being bullet sponges grinding the pace. Mines also get introduced which just get clustered more making you meticulously and slowly pick them off, and it really gets platform puzzle sections which soon become perfect platforming sections.

By the last world, the world of the internet as dreamed as an industrial complex, the pace is completely gone with the last enemy and weapon type being snipers you have to counter snipe with sniper rifles. It’s a typical bell curve of fun, with more coming in as it progress’ but as the halfway point passes the only things that can get introduced is stuff that makes it more complex and slow. And as this is a game that lives off speed it only goes badly.

But, fans of the browser game would cry, does it end in as bat-nuts way the browser version does? Well yes, but the bit that I found most funny wasn’t what I was meant to find funny. There’s two final boss fights, one with the human that has a twist so telegraphed I called it in world one. The second your drug induced finale.

I found the human fight utterly hilarious as it you and and the boss, in a basic platform room, bullet dodging each other to the death. But the Matrix this is not. It’s not even Equilibrium or even Aeon Flux. It’s two people jumping around a room doing ballerina twirls randomly shooting machine guns. It is by far the stupidest thing to look at in the whole game, if not all games of recent, and that includes the final level right afterwards that’s a banana fight on LSD. And that’s the best way to describe the game as a whole.

At the end of the first world, I was slow-mo backfliping a motorbike, akibo-ing uzi’s blowing up two other bikes, then landing on the roof of a chasing car and shooting the driver, to which the car explodes.

The penultimate fight is me randomly pirouetting around a room shooting a machine gun.

It has a good start and keeps the levels short and quick, which in the end is a good thing as the last levels can end up as a combination of tedious and unintentionally hilarious. I do very much recommend the game, its a unique project with good concept, but that comes with a note of know what your getting when you buy.

And also, wouldn’t mind a playback mode to make the gif’s. End of level making is pretty imprecise but being able to pick and chose a 4ish second window to gif, people could come up with some bonkers stunts. Otherwise it might just be time to make another montage.