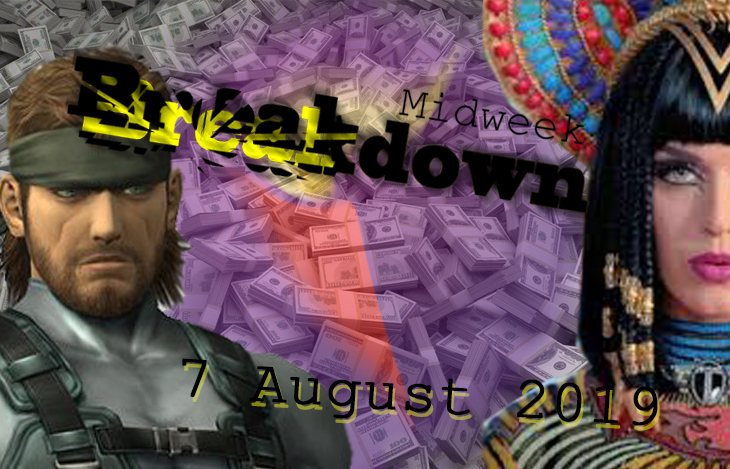 Yes, another new weekly segment! With this coming out tomorrow (started on Tuesday) it’s clear that the film chart won’t be out today… yesterday…

Wednesday is the day when I get the most amped and drown in work both here and in reality. The start of the week has gone past so the magnitude of the drowning is at it’s deepest and the end is furthest away. So time for a breakdown… We have a title!

The aim of these is talk about the big topics/stories of the moment/week and a few things that I think are important that’ve come up to keep things interesting. But rather then focusing on video games as I always do, there’s more creative industries out there and as we are an entertainment website I should talk about them too.

So with that in mind, lets talk about music and Katy Perry.

To bring you up to date; Katy Perry (and her associates, publisher and so on) was sued by Christian rapper Flame over plagiarism and copyright over her 2014 song “Dark Horse”. The suit was filed in 2014 after the song came out so it’s not an opportunistic swing. This is been bubbling in the background for a while and last week it finished cooking; Katy Perry lost. And this is where this gets surprising.

The lawsuit was ‘focused on the notes and beats of the song, not its lyrics or recording‘, mainly the synth ostinato. The synth ostinato is the repeating synth riff that plays in the background under the verses if your looking what what that means. There’s two surprising things about the loss; 1: the fact everyone lost and not just person who wrote the riff, and 2: the fact she lost at all.

The first point is because everyone from Perry to the songwriters to guest rapper Juicy J to the songs publishers and distributors lost. Perry only did the lyrics but was found at fault, Juicy J only wrote the guest rap but was found at fault, just as Capital Records and the music writers who wrote the riff. To make everyone culpable is a big stretch to make but, surprisingly, the jury found them all guilty.

Then there’s point two, the riff itself. The riff is itself is in musical standards basic. The style of the riff is one of the basic movements in music. It’s best explained by musician Adam Neely. The ostinato was deemed ‘unique enough’ so copyrightable and surprisingly the jury found them guilty.

This has lead to an interesting debate on how cases like this are dealt with, as a trial by jury was demanded, and how music is talked about in legal sense like around copyrights of specific sections of music separate from lyrics.

It’s a case that’s not over yet as Perry is appealing against the decision and there could be quite a few professional responses to temper the potential legal reach that this could have. In the realm of long term consequences the case could lead to even more cases, just as this one was a consequence to the “Blurred Lines” last year. The case took 4 years to come to an end so maybe it’ll be around for that long again until the next update. Or until someone gets sued again.

With that long legal talk over with, let’s now talk about the exciting topic of UK tax!

The UK has a government tax incentive scheme to help game development in the UK, blandly called ‘Video Games Tax Relief‘ (VGTR). It gives a developer tax relief and incentives (i.e. cash) during development as long as you qualify. It’s paid out the sum of £234 million over 1110 claims since 2014, over a variety of costings. But this is not just about VGTR but about Rockstar Games, the makers of Grand Theft Auto, and a different type of tax.

It was revealed last week that Rockstar North, the Rockstar Games subsidiary who makes GTA, has paid zero in corporation tax in the last 10 years. This is while it claimed, since 2014, £42 million from the VGTR, aka the equivalent of 19% of all of the VGTR payouts since 2014.

Dan ‘NerdCubed’ Hardcastle as he put it “did a journalism” and looked further into how is got approved for VGTR and explained the details in a video, but like many news stores it can be boiled down to one sentence; while the game is sent in a fictional America, starring fictional Americans, with an American cast, and published by the American company and owner Take-Two where the money ends up, as the company is based in Edinburgh, Scotland they qualify as British and have done since 2015.

The VGTR was built to help smaller developers which it does, the majority of claims go to projects to the costing of £50,000 or less so the fact there is the VGTR scheme is not the bad thing but the way Rockstar North has used us is.

TaxWatch UK, the original reporters and investigators into the dealings called it “absurd” although stressed that their profits where legal and urged the UK government to investigate the system with George Turner, the Director of TaxWatch saying:

“[VGTR] was designed to help developers of games with a cultural content that would struggle to sell in the international market. The fact that such a large amount of that relief is going to the developers of Grand Theft Auto clearly shows that the relief is not working as intended.”

They’re not the latest one to be caught out by TaxWatch with Activision Blizzard being caught using tax havens a few days later.

Now to end of a light an even shorter topic, Solid Snake and pro EVO.

The Tekken 7 Grand Finals where last weekend, with the finals taking place last Sunday. During the last part of the show they did a segment where, of all characters, Snake from Metal Gear CODEC called in to say “That was some Good Ass Tekken.” It was just for the live audience and wasn’t aired on stream.

You would think this would lead to a big reveal as part of the event was to reveal the Season 3 roster but it was for nothing. It was a bit, a joke, a gag. And it pissed everyone off.

The where pissed, as they do, as segments like that aren’t done lightly and for nothing but it was for nothing. Soon as the segment hit the internet rumours into him being one of the TBA season 3 roster spread like wildfire but it was all just a joke. But they weren’t the only ones.

David Hayter, the de-facto voice of Snake pre Phantom Pain, said bluntly: “You also failed to consult me, or Konami. Please do not use my voice to promote other games. Ever.”

EVO managed to get Hayter’s voice saying the phrase through a service called Cameo, where you can pay various celebrities and personalities for small personal messages, like birthday and congratulation messages. But Hayter draws line is drawn at using those messages to promote other products.

Although the surprising thing is that it seems Tekken director Katsuhiro Harada and publisher Bandi Namco where unaware of the segment saying it was made entiraly by EVO and protested as soon as it aired. Harada then added a message of apology to Hideo Kojima (the creator of Metal Gear and Snake) and Konami (the Metal Gear publishers).

Goes to show that while you think you have a good bit, it still might not be funny. Or good. Or legal. Funny how law became a theme today.

This article is already several hours late and very long but I would be re-missed not mention the zombie moral panic that refuses to die no matter how hard it gets refuted, violence in video games.

I shall keep this brief; do video games cause violence?

The studies show that it doesn’t make you any more violent then you already are, at best. So, no.

If you say it does in a black and white way, you are being disingenuous and misrepresenting the materials, stop it.

I wanted to end on that to it would be the last thing you saw and so it would stick. See you next week.