It’s not often that MCM gets a big international developer from overseas to the show. A few shows ago Keiji Inafune, the creator of ‘Megaman’, had a time at the show via Skype for a panel on “Mighty No 9”. Now was the turn of SUDA51, real name Goichi Suda, to have a turn. Suda is most known for being the auteur game director of “Killer 7”, “No More Heroes”, Lollipop Chainsaw” and “Killer is Dead”. But the reason why he was here was to talk about the remaster of “The Silver Case”.

Silver Case was originally released for the PS1 back in 1999 only in Japan but has since been remastered for PC and PS4, (the PC version released on October 6 and the PS4 version due in early 2017). Silver Case was the first game by Grasshopper Manufacture, the game company set up by Suda and fellow developer Yasuhiro Wada in 1998. Interestingly, Wada had his own game at MCM as part of his new development company TOYBOX Inc in the shape of “Birthdays the Beginning” which we have also talked about.

Silver Case is a visual novel style game that tells the story a serial killer police investigation in a fictionalised Japanese city area called ‘the 24 Wards’. During his panel, Suda said that we wanted to release the game in the west but translation limitations and the lack of interest in visual novel style games had always hindered a large scale release. But now with bigger the dissemination of visual novel games, he saw it as the time to re-master and re-release the game out side of Japan for the first time.

Talking of the games original development, he said that he wanted to act much ore as a creative director instead of a head developer, wanting to integrate in the whole team into its development leading him to say “when you head a company, or are directing a game, you have to respect your team and fellow developers.” Elaborating from this, he said that he always wanted to keep the “indie developer mentality” when developing games and keep a collaborative feel with in the company. 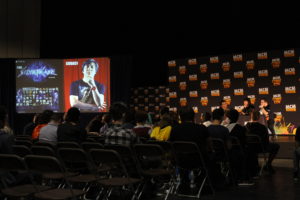 From this he talked about the mobile posts of the game for the Vita. When he asked the crowd who had a Vita he was very surprised at the popularity of the device, leading him to show some support of the device. He also mentioned the mistake he made when announcing the remaster saying that he announced the game for the DS before it was agreed and before they knew it was even possible. He said it’s porting to the DS’s dual screen was the leading issue to why it failed saying that they got it working one screen but nothing was going to be on the second. This combined with the lackluster use of the DS controls left his dissatisfied with the port and so it was cancelled.

Inevitably, there would be questions on his more westerly popular games like “Killer 7” and whether he intends to do a remaster of those. They way he talked did make he seem like he was interested in the idea but he said that he wanted to try his hand at VR and make a VR game and do a remaster of Silver Case’s sequel, “The Silver Case: Ward 25” first.