The steam punk section is a section that I always try to check out every time I’m MCM. It’s a section that always fascinates me. Although some of you may of noticed something like that from things like our Halloween video.

The section always has a varied selection. Fashion and model makers always have a good portion. But one person always has a section for himself is photographer Gary Nicholls for his photo-story “The Imaginarium”.

Nicholls trained in design technology and technical drawing and only moved into artistic pursuits later in life although his artistic influences come from an earlier age.

“The biggest influence on my early life was my father.

My father is a part time artist, very creative and talented and has always pushed me to continue having “hobbies”. So very much later in life, here I am, finally getting to be creative with photography again.

This project is for my father, Bob, to know that his son has carried on that artistic and creative side, which is his legacy.”

He has long been helped by the steampunk community, most namely “The Asylum”, the largest steampunk gathering held in the Lincoln, UK as well as being assisted by Peter Walton (prop maker and model maker) and Julie Walton (dressmaker and stylist).

The Imaginarium itself is a photo-series that currently tells two stories. The first is “Eva’s Story”, a story of “…one woman’s journey from ruination to salvation, saving the world from a powerful nemesis…” and second called “Robbie Pertwee – Frankensteam” where “The battle between Dr William an The Nemesis rages on, but this time Dr William has help from the future,” set in the present day.

The photographs are based in a steampunk world which gives them a very distinctive style. Bronze is the leading colour of choice but his images also have a powerful, high contrast, shadowed look making the smattering of brighter colours look more electric. Most of the images are a composite of layers, having each person and some objects being from different images and then layered together through Photoshop which adds a drawn/painting like feel.

The images are like fantasy paintings, having a very stylised, very intricate design but reaming firm in the steampunk setting. And with such a wide selection of images, there is one for everyone individually.

You can buy his limited edition prints and the photo-book editions from the The Imaginarium website.

“Alice’s Night Circus” (as Alice puts it) is a “curious journey down a musical rabbit hole, featuring a blend of apocalyptic fairytale steampop with a touch of the circus.” It makes for interesting listening. 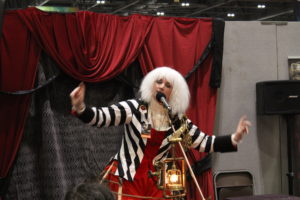 Steampop and steampunk styled music for the uninitiated is something that is more well known then you probably think. It had a time of popularisation from the mid 2000’s with the the rising popularity of bands like Panic! At The Disco and musicians like Emilie Autumn.

Alice’s Night Circus aims for a middle ground with very steampunk inspired music but styled with a modern sensibility. Having the sound of a modern circus aptly enough. It means that songs like “Curious World” feel like a waltz played at a Victorian circus but with the chorus punctuated by electric guitars.

Although, I feel like there is a bit of an influence of swing and electro-swing there. Most predominantly in “Penny Dreadful” that is made predominantly with brass but still retaining the circus feel.

One thing that is undeniable is that Alice herself is an incredible singer. When she did a live performance of both “Penny Dreadful” and “Curious World” on the steampunk stage, it was like she could out sing the whole expo. Very quickly, even the loud e-sports stage seemed miles away. I was half expecting the whole expo to be dead quiet when she stopped and crowd to form but I was disappointed. I think they missed out.

You can buy her albums “Illuminate” and “The Machine” online or download her single “Curious World” free.