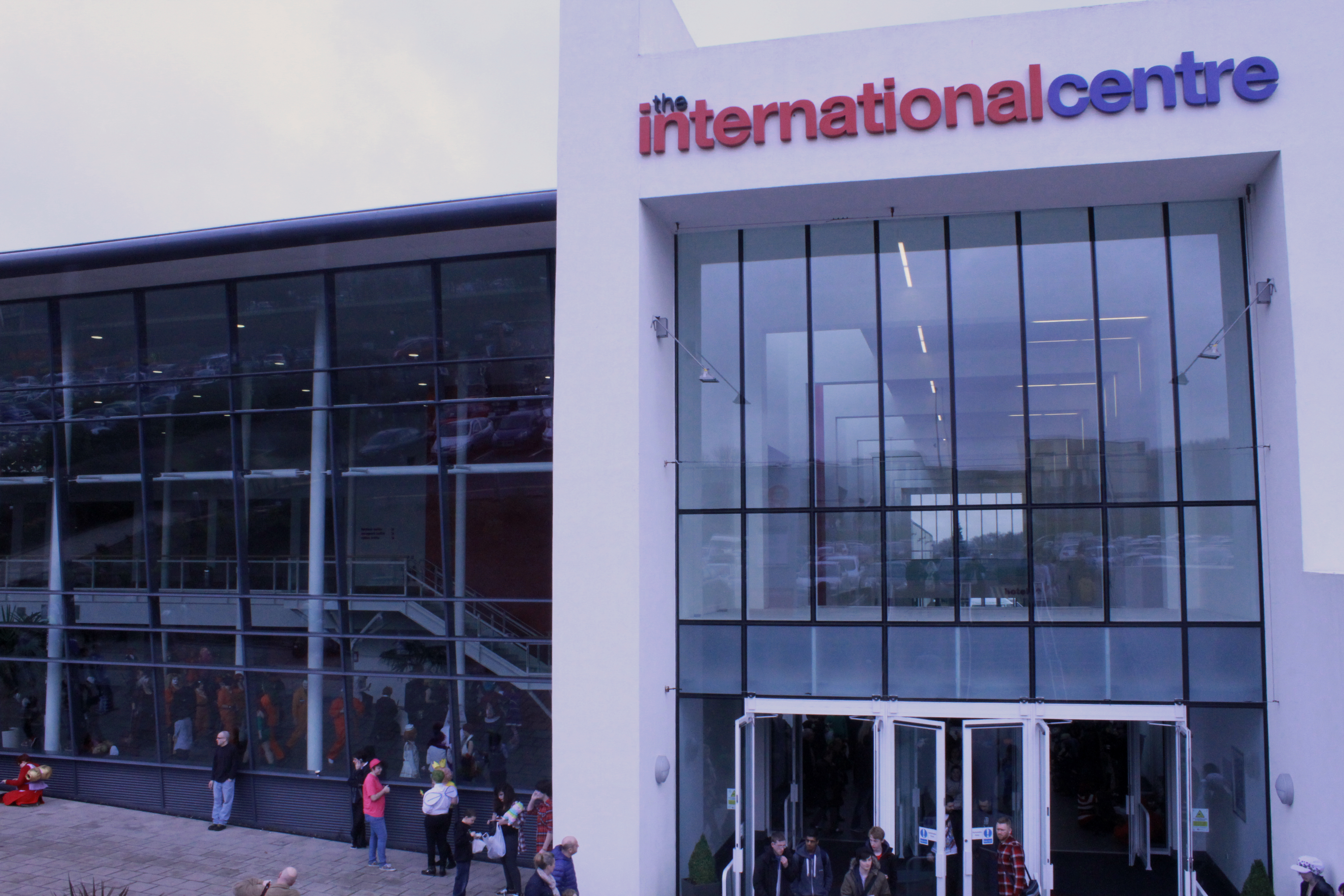 As MCM’s go, or conventions more generally, there was not that much gaming stuff on display. There was a 2 page spread in the show guide though. It briefly talked about “Metal Gear Solid V: The Phantom Pain”, “Final Fantasy XV”, “Batman: Arkham Knight”, the new “Crackdown”, “HALO 5: Guardians”, and “The Order: 1886”. That was it. No booths or videos. There was a panel with voice actor Mark Meer, the voice of Commander Shepard in the ‘Mass Effect’ series a well others in ‘Dragon Age’, ‘Balders Gate’ and many others. It was less a talk and more a standard Q ‘n’ A so not that much was missed if you weren’t there. The overwhelming highlight of the panel was hearing Meer belt out his best Doctor Doom voice. When I say belt, I mean it echoed though the entire convention as well at the bubble dome that was the theatre area. I call it the bubble dome because the way they sectioned off an area for the theatre was to inflate a giant dome in one corner of the convention. The light was terrible for cameras, hence very little footage of the panels, and when it got crowded it got very stuffy and very warm very quickly. A group called Go2Games had a bubble box just like it, but much smaller and in the shape of box cube-y thing, so I guess they were the sponsor.

The bubble theatre also had a Universal Studios panel. Well, they called it a slate because it was less a panel and more just a thing for them to show trailers and gave out some free stuff. A lot of the free hand outs were “Dumb and Dumber 2” stuff like mugs, posters and t-shirts so the film must have had as a lackluster performance as I had heard. Some of the other free stuff were posters for other films including “50 Shades of Gray”. The host asked how many people had seen the film to which no one replied. Although, when he asked who wanted free ’50 Shades’ stuff the bubble dome came alive. I guess people like their ‘adult content’ more in their face then sub-textual. They did resist giving stuff to a rather exuberant 9 year old at the front but that didn’t stop the puns from rearing their heads. They accidentally showed a section of the trailer between trailers. Not sure why, it’s already made a butt-load of money. Don’t think even I is free from the sexy subtext that is not new or in anyway controversial but still manages to seem bland. ’50 Shades’, Mr Barton will see you maybe at some point because you seem really uninteresting.

Anyway, for the trailers that they meant to show, (and I will be brief because this is Mr Barton’s area of expertise,) there was;

The big, main event to come to the bubble dome was the “Red Dwarf” panel with Chris Barrie (A. J. Rimmer) and Robert Llewellyn (Kryten). Most of the panel was the standard Q and A questions but they did get thrown by some of the more philosophical questions about the characters. Well, maybe they did. After the shear amount of panels they would of done about being on Red Dwarf, you can never tell if questions have been asked before. They did mention a few times when a common question came up but that was only a few times. One thing that stuck out was the response to the question ‘what’s going on about season 11?’. It was somewere along the lines of “We’ve had to sign NDA’s, non disclosure agreements, about talking about a new season. Think about that and take that as you will.” This was the most giant of hits that a new season is in the work or at least planned. In comparison, the usual question of “Red Dwarf: The Movie” came up and was answered with a resounding no with hints that most of the crew think that it was probability better that way. They did say that there is full and completed script in someone’s drawer but with so much time having passed since the movie was first pitched, begrudgingly, maybe it’s better that way.

One of the smaller events was talk by graffiti artist kid30. He was on right after the “Red Dwarf” panel so it must have been a bit disheartening seeing the over-crowed bubble dome empty as he was taking to the stage. Seemed like there was a decent sized audience. He’s a good artist too. There was booth where he did a “Teenage Mutant Ninja Turtles” (the most recent one) mural for Universal.

Outside the bubble dome, a corner was dedicated to “Robots Live”, a live event spin-off of the TV series “Robot Wars”. Seeing them around, as well as at other conventions like the Model Engineers Expo, makes me pleased that they survived being taken off TV. Also good to hear that a US spin-off “BattleBots” is getting a brief re-boot run on ABC. Maybe the UK version could get the same treatment. It wasn’t that bad.

As with other MCMs, there was a esports section. It was a very small section that only consisted of 10 PC’s and nothing else. 8 PC’s set up for 4 vs 4 “League of Legends” and 2 for 1 vs 1 “Hearthstone”. It sort of went with the small nature of the event but considering the popularity of esports at the moment, I would of thought that would have been a more substantial section, or even some pro gaming stuff sellers around. There was just 10 PC’s and a quite burly man to make sure they didn’t get nicked and to stop any of the ‘gentlemanly disputes’ from getting out of hand.

It felt a lot smaller then other MCM’s. I expected it to be smaller but not as small as it was, about a quarter or just under the size of the London version. I guess the mass draw of London overshadows all. But talking to some, they said that it was much bigger then last year. With the smaller feel, it felt much more localized. Seeing groups like the Royal Yeomanry Telford there cemented the idea in my head so the best that I can call it is a top-up of the culture that comes from MCM. Saying that because it’s a hodge podge of gaming, film and entertainment culture mixed with anime and comic book culture. Much more then just being blanketed with the term ‘nerd culture’, which is a term I don’t like, (It’s just not clear and it’s kind of disingenuous). Another reason for its small size could be because of the timing. It managed to come right at a time that many call the ‘dry season’ in entertainment. For games, many of the big releases won’t come out for a few more months, to which MCM Birmingham is far nearer to and has a bigger draw. The only big game to come out near the event was “The Order: 1886” and that was never going to be the “Bioshock Infinite” or “DMC: Devil May Cry” of latter year’s dry seasons.

MCM Midlands has fallen into being the little brother to the bigger MCM Birmingham, with it being better timed to the release schedules and for press junkets. Although, the more compact nature of the event has ended up with, in comparison to others of its elk, it to being more localized and that is a good thing. Not everyone can afford to get to or stay for a weekend at larger events like Birmingham or the grand-daddy London events. Having smaller, more compact and localized conventions like MCM Midlands is good. It’s not a massive party like other conventions. It’s more of a meet and great. A day were you can meet up with like minded people, have some tea, have a chat and get the train home that evening content on having a nice day trip. I really hope stays like this because what MCM needs a easy going little brother to the rambunctious bigger brother. And covering three days of MCM London I can only take every so often. Twice a year is already enough.