Skip to content
Guy Off The Internet/Wil Morris Music

Music is something that’s been getting more popular at MCM. The MCM Fringe stage gets quite the draw. This year was no different. But this year the stage had a few special guests.

While the name Makeout Monday may not ring a bell, its semi-frontman will as it’s voice actor Jeremy Shada, (The voice of Finn the Human in the ever popular “Adventure Time” as well as other roles). The band is made up of Jeremy (Vocals, Bass), his brother Zack Shada (Vocals, Keys), Seth Renken (Drums), and John Spicer (Lead Guitar). 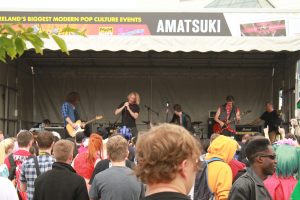 They have a very Californian pop punk style which leads them to having an energetic presence on stage. You can feel the influences of My Chemical Romance, Blink 182 and Fall Out Boy pretty quickly in their songs leading to hints of teen nostalgia for people of my age.

When the band was on stage, you could tell who was there for Jeremy. Although they did play into that a little it seemed. But as the stage was outside, next to the unofficial photographer/videographer tree area, they got a few people to stop and listen. While the biggest pulling area for the band is going to be the acting Shada brothers, “Adventure Time” is heading into the annals of media academia and cult status after all, they do have the skill and the talent to stand on their own. What is also admirable is that they’ve said that as they are in no rush to be signed on to a company, they’re just going to go it alone. And so far they done just that, releasing their debut 5 song album “Kicking Cars” in 2014 and with a new album in the works.

Releasing music internationally when you on a label is hard. It gets even harder when your releasing internationally into countries that don’t speak your language. This is were speaking the universal and worldly spoken English comes with an advantage. But going the other way, say Japanese into an English/European market, is not as easy. This is were JPU (Japan Underground) Records come in. 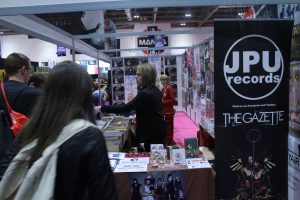 JPU Records has become the home for Japanese music in the UK and across Europe. They’ve become the European publishers of the stadium fillers the GazettE, Boom Boom Satellites, and POLYSICS. At the very Japanese centric MCM, they managed to bring two acts that have never performed into the UK before,.

A metal five piece dressed in Lolita styled maid outfits. Yes, that was correct what you just read. Before you skip, lend me a moment to talk.

The band, consisting of Miku (Guitar, Vocals), Saiki (Vocals), Kanami (Guitar), Akane (Drums), and Misa (Bass) is an import of Japanese culture. You have heard of the maid cafes and otaku culture that’s in Japan. If you haven’t, the maid cafes are restaurants that have their staff in maid outfits. (Get those sordid thoughts out of your head. Their wholesome restaurants.) And Otaku just means nerd/geek, with both the positive and negative connotations that we give to nerd/geek.

BAND-MAID is built on that area of culture, with a big influence being Miku who had worked in a maid cafe. But before you just call them gimmick let me say holy crap can they play!

They have the very Japanese mix of a metal sound with more rock-pop styled lyrics and tone. Other bands have exploded in popularity (most namely Babymetal) so it seems like this style of music is something people have be craving for. But unlike others, if you remove the maid aesthetic they can still stand on shear musical talent. The look is something new to us in the west but it’s found a home and an audience and I can bet they will turn the most metal of metalheads on to their style.

A lot of parallels can be made with Amatsuki to other singers in the west. He first started posting videos on Japanese video site Nico Nico Douga covering songs and making a name for himself in the Vocaloid scene, (Vocaloid being a program like Autotune but with added/extended audio/track editing). Soon he was garnering millions of views on videos and so expanded on to YouTube were he was found by the west. 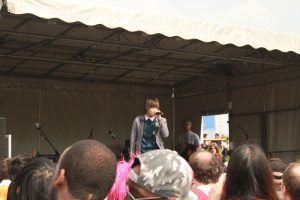 He has since started releasing his own songs on top of his online covers, releasing his debut album “Hello, World!” in 2014. On stage he is very personable and has that boy band charm that brings in the ladies. He soon had the front rows swooning. But he also has good vocal control giving him a powerful voice. He’s a bouncy guy who will fit right in to the pop scene here in the west.