MCM is good for indie games and developers. This year was no different. But there was quite the gap between development cycles. It was clear that some were put together pretty recently while others had a longer development time. As there’s quite the difference between them, I’ll just go through the as a list. 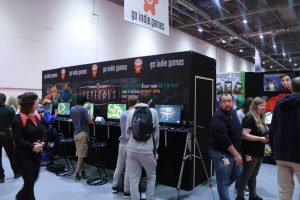 This one was an odd one as it felt like they were using MCM as a game testing ground which is not the best idea. Cons are the first public appearance for a game and if it’s not great, it can hurt it in the long run. At it’s core, its a twin-stick shooter. You start as generic solder person fighting other solders. You start with a pistol but you can pick up things like riot shields, shotguns and rifles on the field. Largely, that means nothing as the most powerful weapon was the knife. Most of the time I just had people just roll at me and knifing me to death. Then I found out that I could just stand next to a pick up box and just cycle through and discarding pick ups until I got the shotgun which stopped that tactic as it had a wide, un-roll-throughable spread. Part of me really wants to like the game but it not just felt unfinished, but felt woefully unbalanced. A twin-stick shooter is fast paced, almost bullet-hell like. It looked, sounded and acted like it wanted to be like “Loadout” (Edge of Reality) but it was just too slow. It’s needs to have a faster pace and more manic and breathless run feel otherwise it’s just who can get their preferred gun by spamming pick up boxes first.

This game made be feel sad. Not in the sense of it was bad. But in the sense that they were way to eager to show it off. Broken Earth Games are a development team made of University of Portsmouth students, meaning that “Super Street Skate” is their last year/post grad’ game. The amount of balls it takes to show off the game is not just admirable but commendable considering they said that the current build of the game is in the range of pre-pre-alpha to pre-alpha. Most developers go for the ‘never showing the pre-alpha to the light of day’ mentality because it’s usually more then woefully unfinished so having them be willing to show the game is worth applause. It also shows they are the kind of developer that is open to criticism which will do them good as an independent developer. Now that I’ve said all of that, it’s time for me to be pretty cruel. The game is woefully unfinished in it current form. The create-a-skater options are extremely limited, although being able to chose in being a board or inline skater is a good touch. It has no moves besides a grind, the controls and movement are floaty and it’s very buggy to the point were I managed to glitch it out and fall through to world a few times. Where they want to take the game is good. But I think they were to eager to show off their work. I do hope that, maybe next year, they come back to MCM with a more filled out game as they’ve got guts and talent. It has potential but what the game needs now is just time.

What else can I say about “TerraTech”? I‘ve made videos on it and with it. YouTubers like SSundie and JackSepticEye have risen it to popularity unknown by most indie games or developers. Some applause needs to go to Payload for coming back year on year even with its current popularity. I’ve interviewed the developers before too so if you want to know more about the game, we’ve done a lot about it.

I found this game pretty interesting. It’s a dungeon crawling RPG, of the same ilk as games like “Diablo”. The game is set in a Venetian style fantasy land were masks, combined with crystals, are magic. The demo follows the lead characters on the hunt for a missing person/thing/maguffin, but then they fall into a mystery of sacrifices and monsters from beyond the pale. I was thoroughly intrigued but the demo did fell a little slow. That might be more to do with the dungeon crawler set-up. Crawlers aren’t suited well for cons as they are more based on adventuring and a constant plodding along instead of the woosh kapow action that draws crowds. The idea of the ‘masquerade’ runs deep and it felt like identity is going to be a theme not just for the game but for the characters in the demo. It’s setting is new and interesting, it’s take on magic is novel and it has a plot that is well written. On top of that it has an impressive cast including Jennifer Hale of ‘Balder’s Gate’ fame aptly. This is one I would really like to get more time with.

I had to really think about this one. On one hand it fascinates me. On the other I really don’t like the game. That might be were a very binary split could come between those that like it and those that don’t. I’m mostly in the middle. The game is a retro styled surreal RPG based around trying to find the missing Sammy Pak, who went missing in an elevator by being dragged into another dimension. At least that is what a video shows what it’s uploaded in the 1990’s when the groups quest to find her begins. There’s two cores to the game. The adventuring and the combat. The adventure is just exploring in the most traditional of JRPG senses. When hearing people talk bout the combat, I heard stand attendants say it was “Super Mario RPG” like and then get ohh’s and ahh’s from the winds of the nostalgic. I don’t have Mario RPG’s as a reference. And I didn’t like this combat in the game. From what I’ve seen, the combat here is Mario RPG like but not in pace. Considering the combat is one of the cores of the game, it really is god-damn slow! It’s very fleshed out, it’s made well and you do stuff instead of just mashing through menus but it’s so slow. Each battle feels like a slog and it just gets boring. The last thing you need in an RPG is for your combat system to feel boring because you will spend most of your time doing it. This is why I’m in to minds about the game. It looks great and the plot has some interesting point but they really need to up the combat speed.

This game I had an affinity for. It’s in an isometric pixel style reminiscent of the neon in games like “Hotline Miami”. The isometric style really sets it apart from others that look like it as the camera position can be rotated around the lead to give you a new perspective on something and seeing what would be otherwise hidden. Vision and being hidden is something that runs through the game deeply. You can stealth you way around, but I’ve found it works out more to stealthing around in the same way as you would in “RONIN”. Stealth into a good position or vantage point and then stab and/or shot the shit out of everyone. Stealthing with no killing takes a level of patience, situational awareness and time that is almost ungodly. That means that the game can be hard at times. But like the other mentioned games you get back into the fight quickly so the pace doesn’t grind to a halt each time you die. The retro but modernised future style makes the game look great and the controls and mechanics are solid. Defiantly one to look out for.

Their were four games that were being shown that I didn’t get to play. For two of them, it must have been very awkward as they were buried inside the indie games stall. One was “Glyph Quest Chronicles” (a match-3 RPG game by We Heart Dragons) and “VA-11 HALL-A: Cyberpunk Bartender Action” (a story based bartending game by Sukeban Games and published by Ysbryd Games). The third game I didn’t play was “Fallen London”, a gothic Victorian dystopian game by Failbetter Games. While I didn’t play it at the con I have played it since and will be doing some writing about it and its sister game “Sunless Sea” in due course. The last game I didn’t play was “Gang Beasts” by Boneloaf. The main reason I didn’t get to play it was that it’s a game that has gained a lot of traction online, with many people on YouTube putting it through its paces. With the likes of Seananners, joined by his compadres, playing it for his millions of subscribers, you probability already know about the game.

One thought on “MCM London May 2016 Coverage, Gaming: Part Two (The Indie Games)”