The amount of companies who have games to show of at this time of year are usually pretty limited. We’re only 2 weeks away from E3 and the summer schedule has become less used for big releases over the more favoured Autumn/Holiday season around November.

This years ‘first-ish time worldwide’ show off was taken by “Tekken 7”. It’s already been in arcades in Japan for over a year but it’s getting a home release and an update some time soon. By this point I’m not sure what can be said about the series. The gameplay has only had only one major change and that’s an addition of ‘Rage Arts’ which plays similar to Street Fighter’s Burst Mode. The graphical style, sound and design hasn’t changed much, with the only change visually being because of a change to a more arcade PC architecture development system and the latest Unreal engine. There’s a selection of new characters with the cast of returning characters like Jin, Hwoarang and Kazuya. But there’s some special appearances like the one made by Street Fighter’s Akuma. Maybe as some sort of penance for the official quiet/ending development of “TekkenXStreet Fighter”. One interesting rumour around the game is whether this will be the last game of the series. Some of the wording around the trailers like “The conclusion of the Mishima saga” has led to a few theories that this will be in the of the series. I’m more inclined to think not. Tekken as a series is still very popular and this could just be the end to the Devil Gene plot line. They have seemed to want to push other characters into the franchise face role (like the CGI movie “Tekken: Blood Vengeance” who has Ling Xiaoyu as the lead) so I’m more inclined to think that they might just be ending the story that has gone on for more then 10 years and spanned 3 console generations.

Publisher Rising Star Games returned with a few games to show off. The most interesting was “88 Heroes”, developed by Bitmap Bureau. The game has an obsession with the number 88, as the plot goes that the evil Dr. H8, at 8:08 on August 8th 1988, brings the world to near disaster as he demands $88 octillion in 88 hours or 88 nukes will blow up the world. So the 88th world president sends in 88 heroes to clear the Dr’s lair of 88 rooms, each with only 88 seconds to clear them before the Dr. locks on to them and kills them. Yes it sounds very dumb but that’s the point. Each level has you play as a randomly selected hero. When you die, you start the level again but with a new hero. When you move on to the next level, you start with a new hero. Some heroes have superpowers and abilities that can help complete the level. Others, not so much. It’s very much dependent on random humour through the playing of the heroes. It’s works most of the time. With the time limit of 88 seconds to complete each level means that you just have to get going and throw caution to the wind. You start the game with only 88 heroes, translating to 88 lives. This may sound like a lot but some heroes’ only purpose is to die in all but a few situations. One example would be a man with a jet pack so they can fly. But he can only go up. So if he gets to the top of a room with no exit, he just explodes and dies. I found the game funny with its silly characters and references. But I can’t help but think that its staying power depends on the size of the hero roster. While a character may be funny the first time you play as them, the 100th time might not have the same impact. It may seem like a petty niggle but considering that in one play through you will play as 88 of the heroes over levels that are only 88 seconds long, it may not be long until you’ve played as everyone. It was quite heartening to see that they have a competition going asking people to send in designs for heroes who could be featured in the game. If they continue with that mentality and have periodic updates adding more heroes over time, then it could have staying power and be a very good game instead of a good game with an interesting, but not lasting, gimmick. 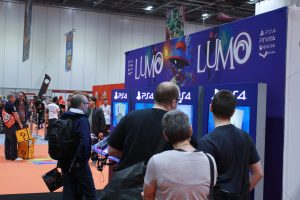 The other Rising Star Games games were alright but didn’t leave that much of an impact on me. There was “Assault Suit Leynos”, a side on bullet-hell shooter, which is a remake of the game of the same name from the Sega Genesis. I liked it and it was very well made with sold controls. I just have no connection to the franchise so I wasn’t left quivering over it. I just thought it was a solid game for the people who like the genre. Then there “Lumo”, an isometric styled, puzzle adventure platformer. It looks very good with its simple aesthetic but it’s biggest problem is its biggest draw. It has no tutorial. You start the game and from that point your are in the adventure. Working out the mechanics as you go. But one thing that you do a lot in the game is back-tracking, which can leave you wondering were to go next. At one point playing the floor demo I got stuck. Not because I got lost or couldn’t work out the puzzles. I just had no idea were to go. Because of the isometric style, only what’s on the far two walls from the positioned camera show up which means if there is a door on the two other walls, you can’t see them. I couldn’t help but feel that a 3rd person perspective or a push-button look mode wouldn’t be amiss. To know how to solve the puzzles you need to know everything and while the perspective of the game don’t get rid of the objects, it does conceal them at times.

Switching companies and genres, Bandai Namco was showing off “Warhammer 40,000: Eternal Crusade”, developed by Behaviour Interactive. Unlike the most well known Warhammer titles and the most recent one we reviewed, this one is a online multiplayer, third person cover shooter. It may seem out of the comfort zone for a more strategy based franchise but Games Workshop has been doing a lot to branch out. And for what it’s worth, the game is good. It’s very unfinished (and with what I was told of some of the non-conformables around its development I can make the guess that it may be getting a delay to it current release date) as two out of the four factions in the game, the Orcs and the Elders are not even finished, let alone in the game. That being said, the game is ok. It has the marching hulk of the Chaos and Space Marines down and the “fire everything” mentality to the guns that they’re known for. My issue to the game is that is the runt of the litter, being a generic 3rd person shooter in a strategy franchise. But this is were I think fans have to put some faith in Games Workshop. We’re still getting a “Dawn of War 3” and that seems great. I saw and talked to a few people, including one of the stand attendants, who didn’t like ‘Eternal Crusade’ because it was such a departure from the franchise roots. The game is fine and everything else is still getting made. Their just getting in other developers and even other publisher to help expand themselves out into other genres to get more people on board. The worse thing I can say about the worst of the recent Warhammer games is that some are petty generic. Generic doesn’t mean bad. Just par the course for an well put together but average game. This is much the same. A currently perfectly adequate cover shooter. 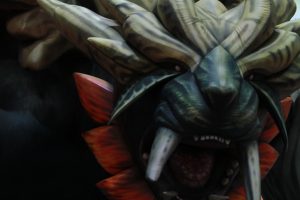 To end this, I should mention the other companies that were there but I didn’t play for some reason or another. NIS America was showing their recent crop of JRPGs. I didn’t play them as most were adaptations of animes I’ve never heard of. Got me interested in a few of them though, like “Psycho-Pass” with is game subtitled ‘Mandatory Happiness’. Capcom had the latest Monster Hunter game “Monster Hunter Generations” for the 3DS. It’s a franchise that I’ve long been interested in but in my long form, boring, in depth way so a con isn’t the best place to be introduced.