There was one game that I wanted to see. I didn’t get to try it out on hand but that was because its the “Attack on Titan: Wings of Freedom” game. Considering anime is a big (if not the biggest) draw to MCM, it was backed up all the way up till closing time. I even saw other media/press groups have to book and reserve spots just to play it. My philosophy is that my press monkey ass is not as important as the fans, (something that came up around the interviews.)

Anyway, The game follows that anime very closely. So if your a fan of the anime waiting for a game version, your in luck! If you someone looking for hints in what season 2 will be like or something more to add on top, you won’t be. You play primarily as Eren Yeager, the series protagonist. You can team up with other named characters like Mikasa and the other members of the Survey Corps. They’ve kept the gore that the series became known for but the titans dissolve totally in seconds instead of leaving a smoking flesh covered skeleton so the processor can breath and not dissolve itself. 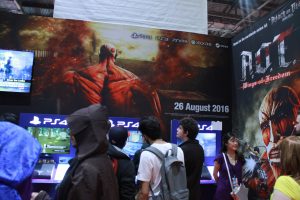 The game is built around the use of the 3D manoeuvring gear and fighting titans. It sounds obvious but it means that these are the things have had the most polish. Manoeuvring takes some getting used too, but there is a training mode to help ease that, and there are all of the types of titans to fight, going form small to large. One thing that became quickly apparent is that the company behind the game are going for a drip feed approach to releases. Most of the questions you want to ask like “can you play as a titan?” or “do you fight the gigantic titans?” were just meet by the non committal “we will be making more releases until the games release in August 26”. Which means, cutting through the PR speak, “yes and yes but we’re being coy.”

A few other questions got some interesting responses. One was ‘is their local co-op?’ to which the response came was no, only online multiplayer co-op. When asked why the response was ‘most multiplayer is done online so we didn’t consider it much use or there being any reason to add it to the game’. So this is another console game that has some parts designed around co-op team play but says no to local co-op. When online competitive came up, as they were drip-feeding the playable titans, the response was ‘no but yes but its an obvious secret’. 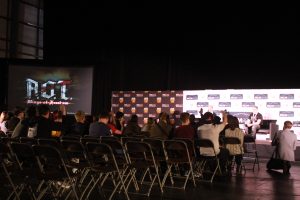 The game seems fun, very well made and it looks great and it has the original voice cast reprising their roles (Although in an odd pendulum swing, the voice cast is the Japanese cast and the game is subtitled as default instead of having a PAL dub.) The PR around the game has been bad. Not in an aggressive way or way that damaging to the game. It’s bad in the sense that they’ve gone for a method that just makes each of the appearances they do boring, spacing out the release of information from week to week meaning that when do have a panel or convention, they say very little so can run the risk of being left out of coverage. What works for Marvel may not work for you.