This years event was much bigger then most of the other conventions I’ve been to. Even the most previous MCM London event was much smaller. Last October, the event covered just under half halls on one side of the building with only barely a few on the other, albeit solely for the VidfestUK section. This time, it was a solid 6 halls on both sides. Not including the halls used for ticket queuing. Before, I used to be able to pick out a few people who were just walking through to get to the other expos elsewhere in the building. This year all I saw was comic con goers.

The expanded size was partly down to the theatre sections being moved around again. All the main theatre sections were moved to the corners to help organisation. VidfestUK had one corner, and ESL (the Electronic Sports League) had another. The other two were the gold theatre, were the big name panels were, and the bronze and silver theatres, were the smaller and gaming panels were. On top of this there are the upper and lower platinum suites, the expanded PopAsia stage, and the MCM Fringe live stage outside. What didn’t help was that the show guide book didn’t have some of the theatre schedules in them. Like the VidfestUK schedule, which was surprising because it was sponsored by the Summer in the City convention, which is now owned by the MCM group. You would think they would want to drive people there just to promote the other convention. 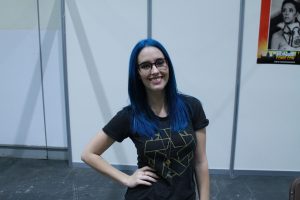 That being said, the convention was largely very good. On top of the usual MCM UK guests, like YouTube’s TomSka and Yogscast and the actors like Warwik Davis, Sophie Aldred and Peter Davison, they pulled in more international stars like cosplayer and RoosterTeeth resident Meg Turney, Adventure Time’s Jeremy Shada (voice of ‘Finn the Human’), as well as the likes of Jesse Eisenberg (Lex Luther, “Batman v Superman”) and Kunal Nayyar and Melissa Rauch (Raj and Bernadette from “The Big Bang Theory”).

To help organise these coverage posts, here’s a list of all the specific topic posts: 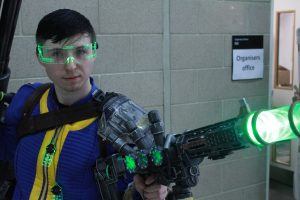 Now for the things that would not fit in the anything else and was to short to go by itself.

The steampunk section had it’s usual showing. Photographer Gary Nicholls returned again to show off his “The Imaginarium” digital art with other makers, costumer and enthusiasts.

E-Sports had a bigger showing, some League of Legends, Legends of the Storm, Street Fighter and the new guy on the e-sports block Overwatch. They also had a small booth dedicated to showing the HTC Vive. Although, there were a few dozen booths showing some sort of VR game or experience in some way.

The comic village was just as big as ever. I got to talk to our friends at Accent UK Comics (more of their comics reviewed coming soon) and friend of the site Jon Laight as part of the new comic collective, Close 2 Immortality.