I’m going to end up comparing “Linelight” to Mike Bithell’s “Thomas was Alone” at some point so I’m just going to start now. Although I’ll end up doing it again later. The game is like ‘TWA’ but lines instead of shapes and no Danny Wallace narration. It’s a big simplification, hence being only the start of the review, with more review for you to read. But it’s safe to say if you liked one, you will like the other. 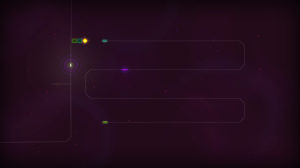 “Linelight” is a puzzle game with each level drawn as a continuous/connected line drawing. This is because you are a small, glowing white like that moves along the track and solves puzzles like collecting keys for doors, pressing buttons and dodging enemies that are on the track. At the start, you are just moving around the space and simply moving past enemies. As you progress, the puzzles get more complex and you face off against colour coded enemies. Some require the use of your special abilities. The first enemies are red enemies that just move rhythmically around. I say rhythmically as then move in bursts rather then continuously and they move in time with the soundtrack but I’ll get on to that later.

Then there is the orange enemies that move when you do along their own path. This is where your first activated power is introduced, time move. It’s just moves the orange enemies along when you can be stationary meaning your can move accordingly around them. The next enemy is a purple line who only moves when you use your second power, a magnet power, which attracts or repels them. I think there was only one time when the power was used to repel in the base six levels so having it called a ‘pull’ power in the controls menu pretty much covers it.

Lastly, there is the clone enemy that’s a pink-ish colour. They basically follow the key commands you do. The main point of that is that it follows our key commands over your moments as some sections of track are coloured were you can’t go and were they can’t go. To you have to pre-emptively make key commands for them to follow in some puzzles.

All of these combined with the introductions of the keys, buttons, etcetera means that the puzzles get pretty complex at times. But one good area of the level design is that your forced to complete the puzzles were you learn new ways to get round obstacles or move in the space of the track. But you can just go past the the puzzles were your using a previous skill again but more precisely or quicker. The prize for doing them is a yellow star (as it was once said, “it is always stars”) which just goes for completion percentage. I got all the yellow stars in the main game but not the 100% as there is also hidden purple stars scatted throughout the game on hidden tracks. There is a little bit of a tell when you go past a hidden track but it is small so you’ll have to to the Dukem thing and grind along most walls if you want to find them all on your own. Or, you can use the walk-through that was pinned in the Steam forums by one of the PR reps. 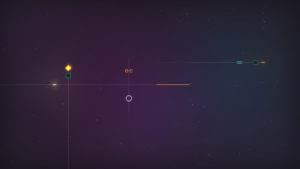 While the opening screens of the game says ‘controller preferred’, I played the game entirely with a keyboard, with arrow keys no less, with no issues. The only issue I had was that all the controls and button prompts were Xbox controller prompts. Although, the keys for the keyboard made sense so I could easily work out the buttons regardless. ‘X’ on controller was ‘X’ on the keyboard, R was restart and so on.

This is the point where the “Thomas was Alone” comparison comes back in the form of a segue. Both of the games have a specific level design. For ‘TWA’ is was using Wallace’s narration in conjunction with the puzzles to convey emotion and the story. “Linelight” on the other had is completely dialogue and text free. The ‘story’ (to use a phrase) here is presented in the music and level/puzzle design. Each level has you start by being introduced to a new puzzle element. Then you go through puzzles teaching and showing you how to use them. Then there is a very clear transition with you going through a smooth, ice like section of track going to the ‘story’ (to use a phrase) section. This is were your teamed up with an former enemy and you have to join them and guide them through a set of puzzles, showing what you’ve learned in the game so far. Then at the end, there is what I call ‘the moment of goodbye’ were your paths separate, the music softens, and you get to the final end point. Without wanting to spoil the goings one of the last level/epilogue, you rejoin up with all of your past allies and help them get to their end point later. There’s a selection of bonus ‘+’ levels that are pretty disconnected to the ‘story’ if you just want more over it’s all done.

In ‘TWA’, Bithell made you feel for a selection of 2D shapes. Here Brett Taylor, the man behind My Dog Zorro, makes you feel for small neon lines. Only one of them you actually control. The musical score is phenomenal, primarily made up of piano and techno beats as a rhythm section, which adds to the ‘storytelling’ aspects the game has. That combined with the level structure makes it a wonderful game. The minimalist style of the game has some calling it zen. And it is. The deaths in the puzzles aren’t played up or exaggerated and you go right back with the click of a button. It’s just really relaxing all combined together.

“Linelight” is a beautiful, heartfelt and wonderfully designed game that I heartily recommend. It’s clever in design, relaxing in tone and heartfelt in it’s presentation.