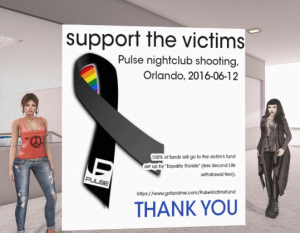 Second Life creator Linden Lab has called on its residents to support the victims of the recent Orlando Shooting that took place in the Pulse nightclub in Orlando Flordia USA over the weekend. Tributes have been held around the world to remember and mourn the loss of the 49 lives that were taken, and the virtual world has joined with their own tribute. In a blog post on Second Life website, Linden Lab wrote:

In light of the tradegy that struck Orlando nighclub, Pulse this past weekend, Casper Warden of CasperVend has set up a kiosk in his mainstore to collect donations for the GoFundMe set up by Equality Florida to benefit and support the victims of this horrific event.”

On the June 12th 2016, a lone gunman walked into LGBT nightclub and opened on its patrons fire killing 49 people and injuring 53 others. The terrible event came to an end after the gunman took hostages and was gunned down by police.

If you wish to donate you can do so through the GoFundMe website, as well as through the CasperVend kiosk in world.