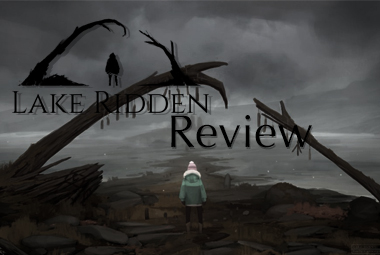 When you first see this game you would think it’s one of ‘those horror games’. Even talking to the developer at EGX Rezzed they said it started out with much more of a horror game bent. But after going through it, I agree with them that they’ve pulled back on the horror to bring the puzzles to the forefront. 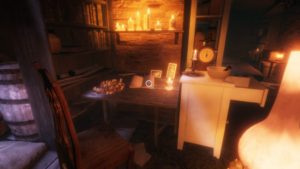 Lake Ridden has you play as Marie, a 13-year-old girl looking for her lost sister. As a note, I only noticed that Marie was 13 as the voice actor sounds more 20’s. Although a lot of it is as a past tense narration of events so not sure whether I should point it out as a flaw or as forward thinking. The plot of the missing sister is actually something that, in the grand scheme, is more of a thin premise for the game to happen but that’s not necessarily a bad thing.

That’s because the story of the game is a ghost story. I don’t mean that just as it’s a story with ghosts in it. I mean that was it’s one of those campfire ghost stories that you tell in the dead of night with a torch under your chin. It’s starting premise is pretty flimsy but it’s like saying ‘there was once a lost girl in a dark forest’. The closed nature of the play area, the number of characters, the consistent tone of spooky that goes through the whole game, the short nature of the game (5 – 10 hours depending on puzzle solving), all play to the idea of a ghost story. It even has one of those ending stingers where you can hear the story teller going ‘wooooooooh…’.

On the puzzles, they’re good. There’s two types of puzzles are most prevalent which are Simon Says music boxes and Lights Off puzzle boxes. The Simon Says ones are as you’d expect but remain as a 3 x 3 grid and around the same number of presses each time so are constant through out the game. The Light Off puzzles I brute forced most of the time as you can either do them in 8 moves or 50. Some of the other puzzles is are where things get clever as they are genuinely puzzling. They vary from light beam puzzles to a pipe puzzle to an investigation evidence puzzle. Outside of the recurring puzzles boxes, the puzzles are actually very varied which means that it doesn’t feel stale by the end. Games like Portal keep the puzzles fresh by adding in more mechanics. Others like platform games just make the margin for error smaller. Lake Ridden just goes for different puzzles and and only makes a few recurring ones that get more complex as the game goes on.

For the puzzles that end up stumping you there’s a hint system to help. The hints come at four levels, each uncovered one after the other when you click on them. The first ones usually just say ‘find this thing’ and the last ones are usually an explanation of the whole puzzle and solution. I only used the hints twice in the whole game and it was all four hints. One was for a beam reflection puzzle near the end where I worked out the end goal before the puzzle and the other was for the last puzzle I played in the press demo at EGX. Turns out, at EGX (when I ended up going over where I was meant to go to the panic of one of the developers) I bumbled into the solution as the key part of the puzzle I didn’t do but did somehow in the demo.

After that, there’s not much to say. It is a short game but it’s the kind of short that makes sure that it doesn’t out stay it’s welcome or drag out the story. The puzzles are good enough to make you scratch your head but not yell at the game in frustration. The visuals are good with a spooky air, and having a good contrast between the day and night segments that creates a flowing tone.

The best thing to say on that point is to cover the questions that often come up; that it’s not an Amnesia style game or a walking simulator. The visuals and online materials does make it seem like that but it’s not. It uses that visual design as an easy shorthand for the story as well as for some creepy stuff that actually doesn’t get explained. The symbols for example are the ilk of cosmic horror and some of the fluff text does make it feel other worldly. But after that, never explained. Although it does leave it open for a sequel. Not sure if that was the intent but it does from a story stand point. 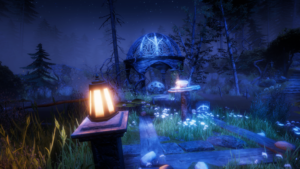 The games a decent price too being £14.99 (or equivalent), being at £13.49 currently with release discount. It’s pretty much where I’d put the game in terms of price. Although you can round it up to a solid £20 and get the sound track as well (which is very good at scene setting while being rather standard admittedly).

Lake Ridden is a great puzzle game with a proper ghost story and setting. It’s got puzzling puzzles combined with a system so you don’t get stuck, and a design that feels other worldly like like a ghost story should. I’d say go get it, very much recommended.