At MCM London last May, I had the pleasure of talking to Jon Laight and Phil Knibbs, the writer (Laight) and artist (Knibbs) of the Kickstarted comic “Brethren Born”. Their Kickstarter campaign started at on the first day and by the conventions end they had reached over £3,000. Quite a bit clear the £2,200 they asked for. In the weeks that followed, they managed to get to get double what they asked for, reaching £5,176 as a final tally.

You can see our original interview from MCM London on our YouTube channel:

Just over 2 Months have passed since we talked to them last. Just about 2 months have passed since their campaign ended. With pulses returning to normal and the work on the starting issues well under way, we thought it was time to catch up. We got to send some questions to writer Jon Laight. Here’s the responses.

Did you expect the response you got from your Kickstarter campaign, getting nearly double your asked amount?

“Absolutely not! I was secretly confident it may get near to the target of £2200 as I had done so much promotion before launch and I knew Phil’s artwork would get people interested. But hitting the target in less than 24 hours was just mind-blowing and really quite emotional. When I got back from MCM London ComicCon all my family had come round to the house to crack open a bottle of bubbly. I hadn’t realised how much they knew that this comic was such a passion of mine and how important it was to me.”

“Getting double has opened up a few more doors to us but you have to be very careful with the funding. Postage and packaging is the one thing that trips up a lot of Kickstarter campaigns so I have had to adjust the budgets due to the amount of people we are sending rewards and the comic to. We have backers in England, Germany, Iceland, USA and even Australia so posting to all those costs a lot of money. There is also going to be a rare variant cover done by a well known digital artist by the name of Hal Laren and each and every backer is also getting a limited edition bookmark. The actual publishing of the comic and it’s timescales are pretty much the same. The comic itself is staying the same but as we are definitely going to be doing issue 2 (possible second Kickstarter campaign) there will be a few sneak peeks at what it will contain.“

What has it been like getting funding and producing a comic through Kickstarter?

“Hard work but not as difficult as it may seem. If you are willing to put the time in, do the research and make lots of connections with other comic people and publishers, as long as you have a good product you should be able to get a comic funded. So many people have been unbelievably generous but I think it was the passion I have shown as well as the sneak previews of what it looks like that got the funding we wanted. Kickstarter has been a great platform to use, lots of tools and analytics to be able to target certain groups. I would definitely recommend it to anyone thinking about using it.“

What does your family, your wife and kids, think about you making a comic?

“Ha ha, don’t ask my Mrs!! On one hand I know she is really proud of me and could not have been any more supportive. She knows what it means to me to do this. On the other hand my head is in the laptop almost every night either working on the comic, promotion, Facebook page or my websites that I have to put aside certain nights so I don’t neglect her too much and she doesn’t kick my ass. Seriously, she is awesome. My kids are only young but they know all about it and regularly draw me pictures of Newton the main character and want to help me at the next Comic convention. My parents are really happy for me but don’t really get it. My dad backed us for tremendous amount so I can’t thank him and mom enough.“ 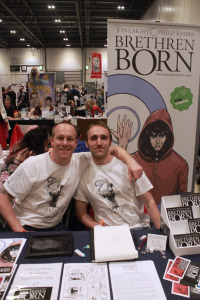 With the popularity of the comic, you have decided to self publish under your own brand, L8. What can you currently tell us about L8?

“Level 8 Comics (www.level8comics.com) is brand new company I have set up to make sure Brethren Born gets a professional launch. I am also doing reviews of other mainstream and small press comics, offering advice for other writers and artists and eventually looking to publish comics for other creators. It’s all very new but I have already had creators submit work to me which has been really encouraging. I will be doing features on other writers and artists as well as supporting the indie comic community.“

Is there any other current plans to publish any other comics under the L8 brand?

“Brethren Born is going to be the flagship series of L8 Comics but it may need a few additions to the team to get issue 2 out in a sensible amount of time to keep the readers interested. I have placed a little teaser on the “Our Comics” section of the website with the title of a totally different comic I am writing and developing at the moment but I can’t say too much about that right now. Any new title won’t be released until 2016 anyway so there is plenty of time to get everything to the standard that will be synonymous with Level 8 Comics. Being mentioned in same breath as some of the other creator owned publishers is most definitely years and years away but you gotta have a dream aintcha??“

You said that you were in the fire service full time in our previous interview. With the popularity of the Kickstarter, has it made you consider moving into making/writing comics full time?

“Right now it’s still a pipe dream being able to write full time. My portfolio needs to grow in a big way to be considered as a successful writer but I hope our first comic turns out something special. I do love my job as a Firefighter but there is no way can consider leaving for a good few years…unless we sell the movie and tv rights for millions.“