Jim Sterling made a “Jimquisition” called “How Consoles Broke The ‘Play Now’ Promise” going on about day one patches and the play now fallacy now have internalised in the realms of the consoles. Before people start yelling ‘internet drama!’ or ‘calling out’ let me say I agree with him entirely. I’m only using his video as a jumping off point.

As Jim said, the prevalence of the ‘Day One Patch’ and ‘install-to-play’ on consoles has reached a fever pitch in the most recent of console generations. Mostly gone are the days of putting a game in a console and playing it right off the bat. Well, mostly except for the Nintendo and the Wii U (this will be returning theme).

But with him saying that, I want to go a little further. I have what I call my “Three Console Testaments”, the three things I think that every console has to have. So I think this is a good time to go through them (in no particular order).

This is pretty much exactly what Jim said. What I mean by plug-and-play is the joining of game and console and the plaything thereof without installs or day one patches. Installs are not something to get rid of entirely. You had the choice on the Xbox 360 but you could just play it off the disk.

Digital download and e-commerce is a large aspect of the future but with the limited hard drive space and lack of ‘real’ space expansions mean that there is a choice to be made on console installs. With disk sizes breaking 50GB on Blu-rays and rapidly rising with the Dual Layer Blu-ray and the soon push of UltraHD, why spend the time installing if you can just play it right then and now. It’s only the most recent consoles, the PS4 and the Xbox One, that made in mandatory. Microsoft spent a lot of time at events like CES and GDC around the Xbox One’s release preaching the word of the cloud. If using the cloud on console means day one patches and mandatory installs, I’ll pass. I just want to play the game. When I get it I don’t want to wait a day or even longer for a patch or for an install that isn’t necessary.

This is when Nintendo can raise it’s old hand and say ‘we don’t do that’. Although it is a publisher that has had issues working with 3rd parties in the past, (an area that has been softening in recent years) so it can have the time to rigorously test their games. Although, let’s not forget that their public E3 presentation this year was basically only 2 games, Pokemon and Zelda.

2: Thou Shall Be Back Compatible:

Even though it’s an often asked for aspect of consoles, backwards compatibility is actually a fairly recent addition. In the days of the cartridge it was harder to be backwards compatible as their wasn’t just the issue of making the games physically fit but also getting them to work hardware to hardware (the chipsets in the console and the chipsets in the cartridges).

As soon as the disk became the norm, so should of backwards compatibly. Most Blu-ray players can read not just DVD’s but CD’s so there is little in technical limitations of disk drives themselves being able to play older disks.

Both consoles have an element of backwards compatibly either current or in their future. We all know that Microsoft is pushing their 360 compatibly list hard. But did you know that Sony has been working on a PS2 emulator for the PS4 for a while? With Sony being Sony, it’s more complicated then it seems. Especially combined with Playstation Now, their game streaming service that sells rentals of the old games. But the PS3 is still not compatible in any way on the PS4, making it the odd mutated one out of the Sony generations.

Then there is the issue of the ‘HD Re-Release’ were (without wanting to sound to conspiratorial) it would be in the publishers interest if the older games weren’t playable on newer machines. Being able to sell the game again 10 years later with only a frame rate and resolution boost makes business (but not consumer) sense.

So they both are “back compatible” while also not as you have to either buy or rent the an upscaled version of the old titles or have it be on a list of titles that are allowed to be used on newer machines. Again, Nintendo holds up its old hand and says ‘we don’t do that’. They do sell HD re-releases but all Wii games work on the Wii U. Just as Gamecube games worked on the Wii, (even though they were mini-disks). Ever since Nintendo went to the disc drive, each console has been back compatible with the one that came before it.

3: Thou Shell Be Affordable.

This is were I will get the ire of a lot of people. Consoles are meant to be affordable with a long life cycle. The way they did this was by not trying to compete with expensive PC graphics and builds. Consoles always have been graphically inferior to PC’s and under powered by comparison. And they always will be. They are electronic boxes that get replaced with an updated electronic box every 6 to 8 years. You can’t change the internals without voiding all connection to the manufacturer if you cock it up. That goes the same for your TV, phone, tablet, laptops and Macs before you deride the closed system of the consoles.

The push for consoles competing with PC’s, especially regarding graphics, is a giant misstep in my book. Even in the realms of online multiplayer the openness of PC’s means that consoles can’t compete in the long term. Yes Nintendo I know your hand is up again. I will get to you in a minute.

Consoles still have their place. A new console isn’t a replacement, it meant to be an update with all the games of the one (or ones) that preceded it. It’s meant to be a box that is small, light and easer to use so you can take it round your friends house for a gathering or party or even with a possibility to taking it with you on holiday so you can just plug it in with an adapter and play bigger then mobile games away from home. And all of that comes with an affordable price point, some steps away form the £400-£500 of the consoles. 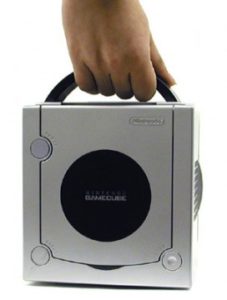 Yes Nintendo. Stop shouting! I said I will get to you!

Every Nintendo console since the GameCube has followed these three steps. But those consoles have one major issue. People only like them retrospectively. The GameCube was out sold by the PS2 by a huge margin. But the games that came on it have since gained cult status. Resident Evil 4 on GameCube. The Rare games. Super Monkey Ball. Luigi’s Mansion. Then theirs the Wii. It sold well but it didn’t last because people deemed the motion controls a gimmick. Now the rise and popularity of VR is part down to using the same hand held motion controls. The Wii U is a bit of a step-child as it was more of a catch-up for Nintendo but it was a sign that Nintendo was seeing the shift in the gaming landscape towards mobile, so it ended up like a tablet/DS cross console. Now with Nintendo having a move to mobile development, and the explosive popularity of Pokemon Go, the Wii U is same part to that.

What happened to the other consoles? Their being replaced with a new version with more graphics after 2 years.

– After Writing: And what have Nintendo done? They released a new console that again seems to follow these three testaments. I hope it sticks. For the sake of Nintendo, and for the sake of consoles. 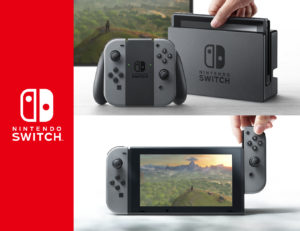