Imprint is one for the most 80’s games I’ve played for a while without it relying on nostalgia. Nostalgia is some big business these days but Morgondag managed to make something of the time but not base it on adaption or reference. And it’s great. Although the gameplay itself swings a little lower.

The story of imprint is mostly contextual as the entire game is dialogue free and has next to no animations. The base story is; you are a clone who is tasked with combating a robotic, digital virus that has been unleashed by some unspoken monster (its a machine/80’s industrial styled figure shaped like a skull so what else was it going to do). The way that you cure the virus is by solving button based puzzles in the minds of the infected patients using a device that really looks like the original consumer version of the Oculus Rift. 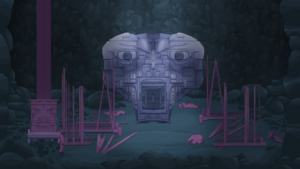 There’s five patients, representing each level set, and special level that is the ‘Random Queen’ boss level slotted in just before the last patient as a bonus level. The puzzles themselves are pretty easy to understand but with no dialogue or tutorial it is up entirely to you to work out what the buttons do. Each patients level set is based around a set button theme, like held buttons, timers and so on, so it’s pretty easy to understand what the buttons do after some fiddling and some trial and error. I managed to get 100% in the first three sets pretty easily but from set four onwards in gets into more obtuse solutions. For example, this is when the memory match levels are introduced. Their not random but your star rank is determined in the number of button presses you take. So if you want to get the 3 star rank you’ll have to go through it a few times and memorize where everything is. There were a few puzzles I couldn’t work out the solutions for but there are multiple paths when you select what puzzles to complete so even if you get stuck, you can still get to the level bosses.

The level bosses (called Wardens) comparatively aren’t puzzles but more like rhythm clickers. Rather then pressing buttons in the right order, you have to click when two moving objects moving about on screen overlap. Most of the time, they both move in a repeated pattern but sometimes they both move randomly which can draw some ire. I played a bit of the game before release and by the time it got to set three, the randomness and speed made some of the sections impossible to beat with using the power ups, (one being slow-mo and another being full heal with the third just being skip level). But, the game was patched day of release which patched a fair bit while not taking away to much challenge.

What the boss stages really do is give you a moment to appreciate the visual design and music of the game. This is were the very 80’s-ness comes in. The design is coloured in very neon deep purples and pinks. Think the poster of the movie “Drive” or the leading design in “Far Cry: Blood Dragon”. The characters are more hand drawn, while sticking to the colour palette, which separate them from the more cleanly, computer animated Wardens and space-like backgrounds. The 80’s-ness is cemented even deeper home with a very synth soundtrack, which you can download as DLC.

You would think that a game where your only interaction is clicking buttons would mean that there would be a small list of puzzles but there is quite a few, coming in at a pretty meaty 100 levels. And at the price its currently at on Steam (£3.99/$4.99) it’s pretty decent.

It has a fair list of pros and cons so I would think this would end up being an acquired taste for most. The total lack of dialogue and tutorial is intriguing in that you have to work out a lot by yourself, but if you just want to get to solving puzzles it could get in the way or be obstructive by not telling you things. Having the puzzles just based on pressing buttons makes it a great game for mobiles and tablets (with different prices with iOS being £2.99 and Google Android being £3.09 for some reason) but less so when on PC’s. It also makes the puzzles easy to play and go back to but it’s not a cerebral challenge.

So, in the end, the game is good and I liked it. The puzzles are well made but lack a cerebral heft that comes with the design choice, but it’s priced well to compensate. The visual and sound design is were it excels and were where it stands out. So if the idea of an 80’s inspired, casual puzzler has you intrigued, then it comes very recommended. If not, then might be one to pass.