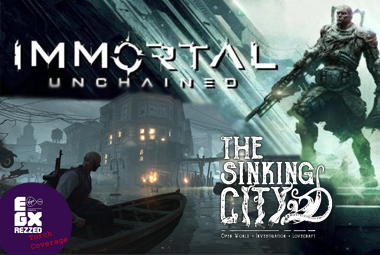 Immortal: Unchained
Developed by Toadman Interactive for PC, PS4, and XBox One,
Published by Game Odyssey Limited,
Full release to be announced (TBA)

The Sinking City
Developed by Frogwares Games for PC, PS4, and XBox One,
Full release to be announced (TBA)

Putting games together for dual coverage to save space ends up biting me here as there is no real connection. They’re both designed with a dark aesthetic but two different aesthetic styles. Their both alien to an extent? Yeah sure, lets go with that and get to talking about the games already. 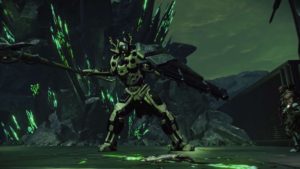 Immortal: Unchained is going to split some audiences, both in its design and its aesthetic. It’s a 3rd person RPG shooter where you are an ‘unchained’ ‘immortal’ out to put the sharp things in other things to prove they’re more mortal then you.

It’s aesthetic is… I’m going to go with ’90’s as fuck’. Being someone who never really left the 90’s I like the style but others would call it… over-designed. It’s in the, as an example, Chronicles of Riddick style of being dirty, dingy and kind of Giger-y. Everything is metal in the object sense and metal in the music sense.

Then there’s the idea that it takes itself very seriously. Everyone is grim faced in resignation of the events that are going to unfold. Your fucked, they’re fucked, everything’s fucked so your just going to go round screaming at things in the best gravely voice you can muster and then shoot them.

And then there’s the whole shooting things. You can take a guess at what games biggest influence is and where the problem lays when I describe the game as a Dark game where you collects the Souls of enemies for upgrades.

Shooting things in Dark Souls styled games can work. In Bloodborne it’s used as a stun shot (staggering regular enemies) or as an ‘I need a moment’ button (shooting wildly when things have gone badly). The primary mode of attack for both the player and the enemies is melee combat with shooting as an extra. But the way they integrated the shooting in Unchained was to link the firing with stamina (with ammo being separate as well) and made the guns as 3rd person shooter guns so you have pistols, rifles, etc with regular gun stats. On top of that, I don’t think there’s a dodge roll as I pressed all the buttons and couldn’t find one. If it’s a double tap or button combo then that’s not a good control scheme. A combat roll as something more instantaneous and reactionary and a double tap or combo is neither.

This makes the entire combat system self-defeating and makes the boss fights discordant with the regular walking round. When your walking around a sniper rifle paired with a shotgun or an SMG is best as you can just kill the enemies before they even know your there and blitz them when they get to close. But that’s not fitting with the boss fights as you need powerful quick weapons as they’re still the grand fights against giants. So you would say use melee but with every walking enemy having a gun of some kind means that you can’t get close quick enough, especially without an instant roll. It’s simply a combat system that doesn’t work, at all, in any way.

They tried to mix both of the 3rd person styles that can’t mix, the Uncharted wondering and shooting with the slower and more careful footed Dark Souls system. Each individual component is good and well made but in combination it’s a total mess. Either go all in with the 3rd person melee and trim away a lot of the shooting, or be a 3rd person shooter and remove the stamina system and quicken the combat. Because at the moment, each system gets in the way of the other. 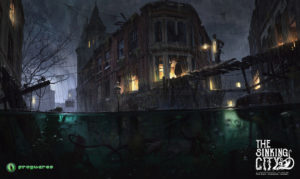 The other game of this pairing is a totally different game by Frogwares Games, the developers of the Sherlock Holmes game series. It’s called The Sunken City and considering the times that pop culture is in at the moment and that I like this game, I’ll give you a guess to what the games about.

Yep, is H. P. Lovecraft and it’s a story in the worlds of Cthulhu.

It’s actually interesting seeing this game be announced considering that one game I’ve been keeping an eye on is Focus Homes’ Call of Cthulhu adaption, as both of these game have the same premise. Your an investigator who goes into a town that is racked by the curses of other worlds but there is a key difference that leads to very different tones. In Call of Cthulhu your a man going into a world of madness, but in The Sunken City your already in a world of madness. In one your the outsider questioning their world and the other your a known man questioning known hybrid people from Innsmouth.It’s a small difference but it makes quite the contrast in tone.

Sunken City is almost a sequel, having all the trappings of Lovecraft but after the madness has happened. You research information of cults and other worldly things from library’s and newspapers where it’s all documented and ready for world building fluff text. It’s rather unique to play a Lovecraft game where madness is the norm for the character, who already has other worldly visions and shoots known monsters from the ether already. Many of Lovecrafts stories are about the already mad from ‘the knowledge’ who in the end either gain or lose control of that madness, and this seems like it will tell a story like that. Will you control the madness or let it consume you?

It helps the mechanics of the game as it’s the the same as the Sherlock Holmes games, you get a case, investigate it, and find the culprit, unearthing a larger mystery that goes through the whole game. Taking away the usual ‘going mad’ Lovecraftien narrative makes the investigation aspect stronger and in a game of this style it’s a big plus.

Outside of that regarding the controls and base mechanics, there’s not much to say. More so because it what you would expect. 3rd person strafe and camera, quick select rings, some crafting mechanics for consumables, and dialogue lists.

The dialogue lists do lead to an aspect that is something of a continuation from the Sherlock games, branching results. In the Sherlock games you would use his intuition to gather most of the evidence but here is much more of based on literally finding key evidence and doing proper research. For the demo, the key object was a note from an interview that leads to researching the interview and breaking down a lie from a witness. It’s a good system as it makes you be more considered and be though in searching.

It seemed a little far from being finished but from talking to one of the developers there, EGX Rezzed was pretty much (or as close to being) the first public showing of the game. So probably a year or so left as there’s no confirmed release date or planned release window as yet.

The Sunken City is an interesting angle to take on a Lovecraft style story, going less for the more well known tropes and going for more for an investigative story. I’m interested to see where the game goes.