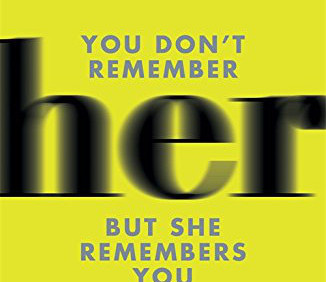 Her is a 2014 domestic suspense novel by Harriet Lane, it follows Emma and Nina has their lives become intertwined While Emma believes they just met,

I found it hard to put this book into a category, is it psychological, is it thriller? I did some research and settled on the term ‘ domestic suspense’ because a lot of reviewers were saying it was a noir, a psychological thriller, ‘marriage thriller’ or a female suspense,, I just think domestic suspense fits a little better.

Her is a wonderfully written novel, read from the point of view of the two main characters readers follow their interactions as it is seen by both women. The chapters are told by each point of view, beginning with Nina, moving on to Emma and alternating between the two. The story will keep you reading just see how Nina knows Emma and why she becomes so interested in this woman. Lane’s descriptive language and use of first person does put you in the head of Nina and Emma and helps to show you the contrast to their lives.

Emma is a former broadcast journalist who is now a stay at home mother and is struggling through the day to day life that motherhood brings. She yearns for her days back at work and it is shown that she is very frustrated with her role as mom, but is doing what needs to be done. Nina on the other hand has what some may call the perfect life, she has a seventeen year old daughter who is out of the house during the summer, she has an architect husband, and she is a painter with her own art gallery.

While reading ‘Her’ Nina was my favourite character for a while, I began thinking maybe Emma did something to Nina, cheated with her husband, caused them to split up, something a long those lines. When Nina began to insert herself into Emma’s life, I was holding on to see what Emma did in the past that was so bad. However upon finishing the book, I finished the last line with a ‘What? Seriously? Really?’ The book started off very strong, Nina sees Emma out and about in London, it is hinted that something happened in the past between Emma and Nina. Nina quickly begins to insert herself into Emma’s life offering to baby sit, ‘returning’ Emma’s son when he becomes ‘lost’, etc.

While the plot unfolds, you suddenly feel yourself feeling sorry for Emma, her life, unlike Nina’s is not perfect. She is frustrated with not being able to work, and her new role as mother is quickly taking a toll on her. Emma barely remembers Nina and whatever happened in the past, she is simply too wrapped up in her own issues and problems to pay attention to all the trouble Nina is causing her.

The final chapter reveals the mystery of the past between Nina and Emma. Nina is nothing more than an obsessive idiot, who basically blames Emma for something Nina herself did. She is every woman or man out there who blame another people for their downfall because the person happens to be in the area when the downfall began. Emma doesn’t remember Nina because they were not really connected. They met once when they were teenagers, Emma and Nina are now in their late 30s early 40s. What happened it wasn’t a boyfriend or husband of Nina’s that cheated. It was a projection of Nina’s own insecurities, which led to something that changed her life, and her life isn’t bad, it’s basically as soon as lives get so she’s basically, being a bitch for nothing. Emma just happened to be there. The ending, you can say, was bit underwheleming so I went back and stumbled unto a conversation between Nina and Emma’s husband Ben:

“I don’t say that I’ve read it and enjoyed it, though I found the final plot twist unsatisfying, as plot twists often are: nothing like life, which – it seems to me – turns less on shocks or theatrics than on the small quiet moments, misunderstandings or disappointments, the things that it’s easy to overlook.”

That line blew my mind, it’s as if Nina is talking about ‘Her’ it self, and while it doesn’t change the character’s motivations, I still think is idiotic. I have a new found respect for the author. A nice subtle hint and nod to the audience about the books ending. I chuckled when I read the next line:

‘I don’t think I like these characters,’ he’s saying: an annoying remark, one with which I can’t be bothered to engage.

It feels like the author was basically saying, If you don’t get it then I don’t see the point in explaining it to you.

Overall Her is a good read, it’s a bit on the short side, it begins strong but by the end it loses its steam a little. Nina’s reason for what is doing to Emma is stupid and Emma is too wrapped up in her own life and worries to even notice the troubles Nina causes. I’d like to think that Emma is saying , ‘ Everyone has their own issues, Get over it. It’s not like it made your life worse.’ I, however, think you should pick up this book  to get all the subtle hints and nods to the reader.

If you want to check out Her by Harriet Lane, its available on Amazon, Audible and your in local book stores.